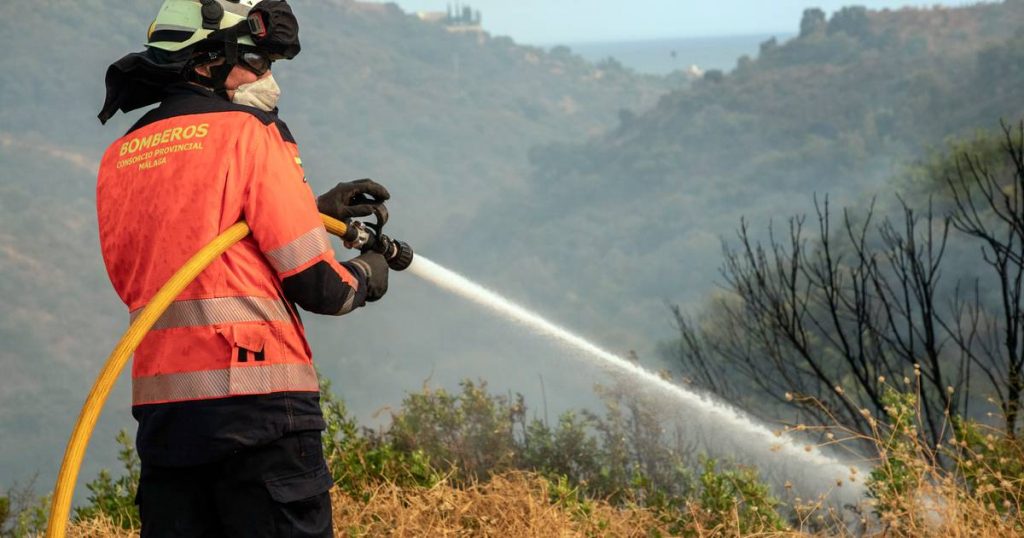 In south-eastern Spain, the army is deployed in the fight against a large forest fire there. It has already destroyed more than 6,000 hectares of forest, forcing hundreds of residents to leave their homes.

The authorities today evacuated the inhabitants of the town of Jubrique (500 inhabitants) and announced that the 400 inhabitants of Genalguacil must also leave their homes. More than 1,000 others had already been evacuated for the weekend from other areas around the seaside town of Estepona, popular with tourists and foreign expatriates.

A military unit showed up at the Morón military base to join the more than 300 firefighters fighting the flames. Infoca, the Andalusian region’s agency responsible for fighting the blaze, today described as a crucial day to bring the blaze under control. Infoca posted aerial footage showing towering plumes of smoke. This makes the area difficult to reach.

A combination of heat and drought with strong winds created ideal conditions for the fire. He quickly turned into a “hungry monster,” as one regional official described earlier this week. 44 year old firefighter deceased Thursday by extinguishing the fire. Authorities say they have evidence of arson.

Forest fires are common in southern Europe during the hot, dry summer months. This year, there were fires especially around the Mediterranean, exacerbated by the strong heat waves in August. More than 75,000 hectares (186,000 acres) of forest and scrub burned in Spain in the first eight months of the year, according to official data from the Spanish Ministry of Ecological Transition.

At least 6,000 hectares of forest land were destroyed by the fire, according to local authorities. “There has not been a forest fire like this in Andalusia for years and perhaps all of Spain,” said region president Juanma Moreno.

The blaze is fueled by high temperatures of over 30 degrees and drought continues in the region. A major highway in the area has been closed due to the development of smoke.