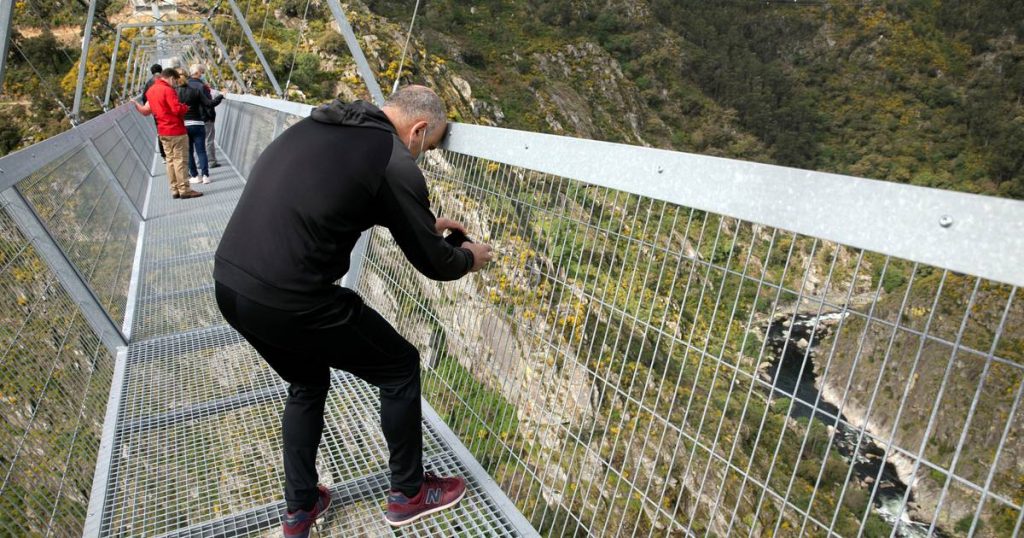 The world’s longest pedestrian suspension bridge opened to the public in Portugal this morning. The attraction should give the Porto region a boost.

The mighty 516-meter-long bridge is an adventure, guiding pedestrians 175 meters over the Paiva River in Arouca National Park, an hour’s drive southeast of the city of Porto. The suspension bridge, supported by steel cables on two massive V-shaped towers on either side, sway and sway with every step. It takes about 10 minutes to walk from side to side, provided you enjoy the panoramic views along the path that will be offered to you on the bridge: the majestic gorge, the river flowing through the gate, admire your feet, the waterfall. .. Anyone who opts for early prayer and a nervous power walk will take about four minutes.

Last Thursday and Friday, residents of the nearby town of Arouca were allowed to try. “At first I was a little nervous, but it disappeared because of the spectacular scenery,” guinea pig Mónica Bernardo told the Portuguese newspaper. Morning mail. “Testing” Rui Brandao also experienced it like this: ,, A must! Even if, like me, you are afraid of heights ”.

The mayor of Arouca obviously hopes for many tourists as soon as travel becomes easier again. The region of Arouca is aging rapidly because most of the young people settle in the big cities. Residents hope the attraction, which the municipality said cost around 2.1 million euros and took three years to build, will put Arouca “on the map”.

The idea with the bridge is not entirely new. In 2005, the municipality of Arouca started planning a geopark, which was then integrated into a Unesco program. The bridge and the expected tourist flow should henceforth contribute to the development of the north and constitute a counterweight to the capital Lisbon and to the Algarve, still very popular with tourists.

The European Union supported the project. Children under the age of six are not allowed to walk on the bridge. Minors must be accompanied by their parents. It is the same for the elderly: a tourist guide must be present. The crossing is not free. A walk in the valley costs 12 euros for adults.

The record for the longest pedestrian suspension bridge in the world was held by the Charles Kuonen Bridge near Randa in the Swiss Alps. In 2017, the 494-meter-long structure was opened to a height of 85 meters on the east side of the Mattertal. Before that, a rope bridge in Saxony-Anhalt was the longest: the Titan RT in the Harz Mountains is 483 meters.

“I was a little scared, but it was worth it”, Xavier confides relieved on arrival on the other side. ,, It was amazing. A unique experience, an adrenaline rush. “