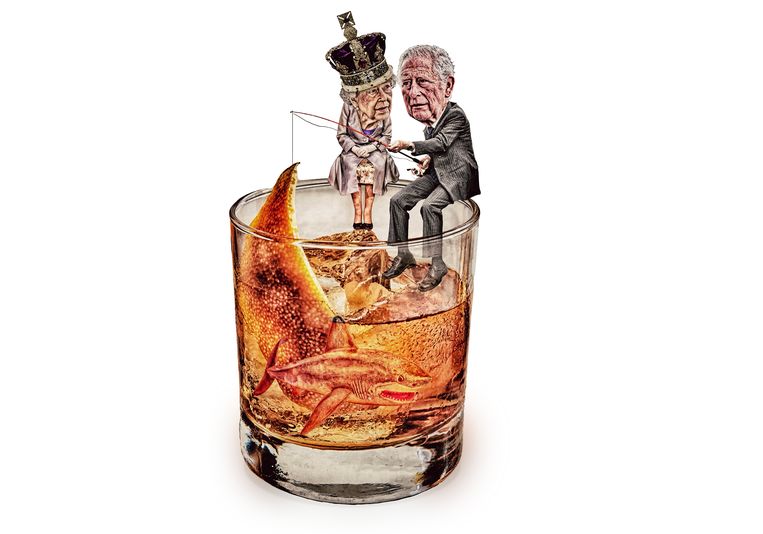 Queen Elizabeth II: “Why are you calling mum late at night for her Martini moment?” You know how she relaxes after a long day at work for seventy years, don’t you?

Charles, Prince of Wales: “Excuse me mum, but I’m a little uncomfortable with all these thoughts about your seventy years on the throne. They compare you to a rock and me to quicksand. They make dire predictions about the future of the British monarchy… It’s not really the case that your health is declining, is it?

Queen: “Everything in a person’s life comes to an end, my dear 73-year-old boy. Never complain, never justify, which is half the success of a platinum reign. The other half is a good drink in the evening and an episode of EastEnders Where The abbey in the town center†

Charles: “But dear mother, they write that you are one hundred percent irreplaceable, that you possess unique qualities, that the House of Windsor will not survive the coming succession…”

Queen: No one is irreplaceable, go check out the cemetery. My eldest son shouldn’t be thinking about inheritance. A crown prince who worries about the succession can abolish himself. You know what Mom and Philip Mountbatten used to say? We have passed on all the genetic material an heir to the throne needs, but unfortunately spread over several princes. Andrew, Duke of York has a knack for thinking little and not being ashamed, but his IQ and moral compass leave a lot to be desired. Charles, Prince of Wales, has intelligence and an ethical conscience, but he thinks too much. And he who thinks too much is doomed to doubt. The Crown Prince’s doubts about his wife put the British monarchy in serious danger a few decades ago.

Charles: ‘Today, I absolutely no longer doubt love, mum. I doubt the integrity of 10 Downing Street. This clown is no good. This clown is capable of anything, he knows shame even less than our Andrew. He will attack me as soon as I become king!

Queen: Let’s not talk about the prime minister. With all his antics and business, he has already consumed far too much precious British time and attention. Suppose the UK recovers all hours and brain cells spent since 2016! It would propel us to the speed of nations. Ignore him. It was unwise of you to call his migration policy “disgusting”. It is, but our job is to keep quiet about it and keep this kingdom together. During her platinum reign, mom has seen fourteen prime ministers pass. She can’t promise you she’ll live forever, but she can promise she’ll stay on the throne long enough to see the current Prime Minister step down.

Charles: “The problem is that many renowned historians write that the clown is symptomatic of the decline of our beautiful United Kingdom. They write that you are the very last person to honor the word “Great” in the name of the country Great Britain, that only you can stop the centrifugal forces, that Great Britain under your successor will shrink to Little England. What am I supposed to do when I’m on the throne and Scotland and Wales declare independence and Nigel Farage becomes Prime Minister and Priti Patel announces that all journalists in The Guardian be deported to Rwanda? Then there will be no united kingdom at all to stay united!’

Queen: Don’t think too much about it just yet, my boy. Mom’s glass is empty. She wants to go to bed. She will truly live for a while in the national interest.