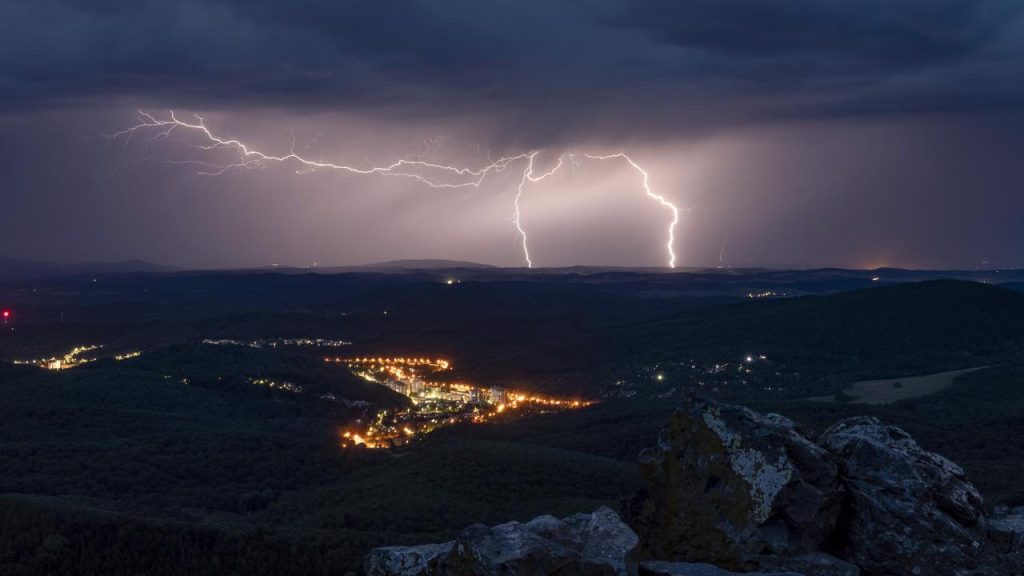 Thunderstorms are caused by friction between rising warm air and descending cold air. Cold air does not rise, so high ground temperatures are needed to cause thunderstorms, a Weerplaza spokesperson told NU.nl.

On hot summer days, the ground temperature is higher. This hot air contains a lot of water vapor and rises. This air then passes through the cold air at a speed of up to 100 kilometers per hour. “It is especially in hot weather that there are strong upward and downward movements,” explains climatologist Peter Siegmund of KNMI. “The air heated by the sun at the Earth’s surface expands, becomes lighter than the ambient air and rises.”

This warm air then cools slowly and at a certain temperature, which depends on the type of air, water vapor condenses and clouds form. If these clouds start to develop, more movement will take place in the cloud and there will be more chance of thunderstorms, explains the Weerplaza spokesperson.

Special storm clouds during thunderstorms in Germany. They are also known as supercell. This is the most extreme form of thunderstorm there is, including the risk of tornadoes forming.

What exactly is a thunderstorm?

There are electrically charged particles in thunderclouds. The violent movements in the cloud create an electrical charge, upsetting the balance between positively and negatively charged particles. If the disturbance becomes too great, a so-called discharge must take place.

Most releases take place in the cloud itself. But sometimes the voltage difference between cloud and earth surface is too big, then lightning strikes. “During a discharge, the particles seek each other along the path of least resistance. It is the lightning that we see. It is the spark that ensures the cancellation of the voltage difference. When the “flash flickers, several discharges follow one another via the same path”, declared the spokesman of Weerplaza.

The lightning contains a huge amount of energy, which releases a lot of heat. The interior of the lightning can reach 33,000 degrees, according to Weerplaza. By comparison, the surface of the sun is about 5,500 degrees. The heat causes the air around the lightning to expand, creating a shock wave through the air. And we hear it like thunder.

The speed of light is several times greater than that of sound. To estimate how far away the thunderstorm is, count the number of seconds between the lightning and the thunder. Every 3 seconds is about 1 kilometer.

Climate change is causing an overall increase in temperature around the world. Global warming makes the air warmer. Warm air can hold more water vapour, about 7% more per degree. If there is more water vapor in the atmosphere, more extreme weather events can occur, such as hailstorms, flooding from extreme rainfall, and more thunderstorms.

“For each degree of temperature increase on earth, the number of lightning strikes during thunderstorms increases by 10 to 15%,” explains Peter Siegmund of KNMI.

Thunderstorms more often in the afternoon or evening. “That’s because the air often gets warmer during the day and it’s not yet warm enough in the morning to cause thunderstorms,” ​​the Weerplaza spokesperson said. If there is a thunderstorm at night, it is often because thunderstorms are blowing in from neighboring countries like Belgium and France.