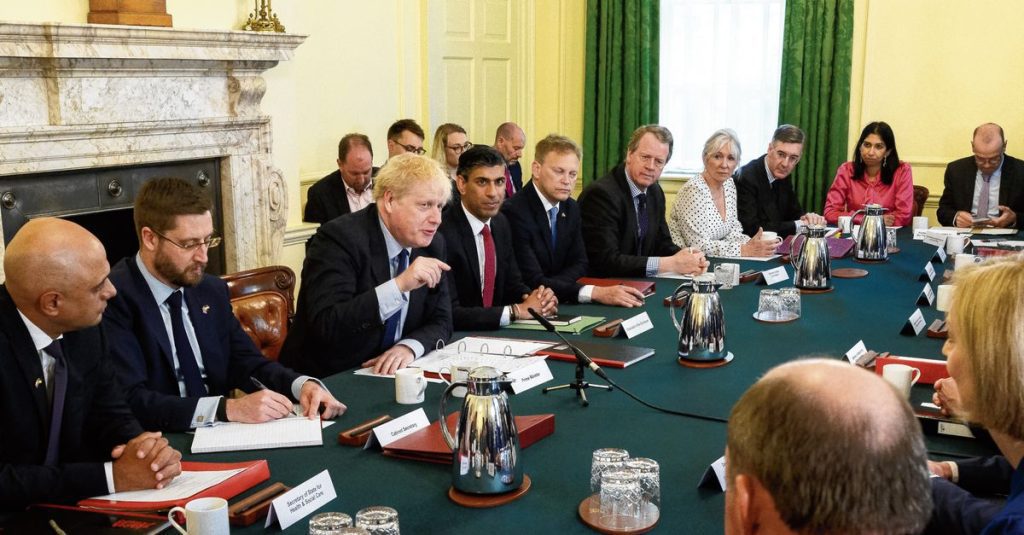 His victory immediately had a dark and disturbing side. But British Prime Minister Boris Johnson tried to ignore that on Tuesday.

Johnson “just” let his cabinet meet on Tuesday. Above all, he wants to see in the vote of confidence he won Monday evening the end of a phase of “withdrawal”. The prime minister and leader of the Conservative party wants to “draw the line and now talk about the subjects that are important to the people of the country”, he told his ministers.


If one phase is already over, a new one has also begun: when a large minority of the Conservative Party officially wants to get rid of the Prime Minister. Prior to the vote of confidence estimates circulated from the ruling faction in the House of Commons that around 100 Tories would vote against Johnson. There were many others. Of the 359 Conservative MPs in the House of Commons, 148 gave up trusting him, or around 41% of the group.

Johnson is now trying to fight back, while his opponents will look for opportunities to force his departure. And while Johnson has shown in the past that he can win against all odds – twice the mayor of London, the Brexit referendum – he too will know what happened to his predecessors who won such a vote of confidence. suffered. The end of their leadership was generally in sight.

Politics to save the leader

In response to pressure on Johnson, the government is trying to appeal to its own supporters with typically conservative plans. The deportation of asylum seekers to Rwanda is expected to begin soon, which should put an end to the dangerous small boats on the English Channel. There will be a law which circumvents the agreements with the European Union on border controls in Northern Ireland. The rights to buy your house as a social tenant be expanded. And next week, Johnson and Finance Minister Rishi Sunak will present new plans to help Britons cope with soaring daily living costs.

These are all sorts of proposals that are seen in the UK mainly in light of Johnson’s weak position. “Politics will not be judged if it is good for the country, but if it is good for the ruler,” writing the FinancialTimes Tuesday about it. Difficult or controversial measures, however necessary, are likely to be mitigated or avoided. The passing proposals fail to address the heart of the criticism: that Johnson himself is the problem. Fans no longer trust him, regardless of government policy.

The grassroots no longer trust Johnson, regardless of his government’s policy

Anyway, it is already difficult to federate these conservative voters. Johnson’s big win in 2019, in which Brexit played such a big part, saw a diverse audience vote for the Conservative Party. Traditional constituencies in the south of England are now leaning more towards the Liberal Democrats, while longtime Labor voters in the north are once again seeing Labor as an option.

Two key by-elections are scheduled for the end of June, with the Conservative seat likely to go to Labor in one constituency and the LibDems in the other.

Johnson’s opponents are now numerous, but they are not very organized. Party rules dictate that a vote of confidence can only be called again after a year, but on Tuesday rumors have been circulating that critics are happy to change this rule if they deem it necessary.

They have a significant problem: the oft-mentioned candidates for Johnson’s succession are almost all in his cabinet – Rishi Sunak, Liz Truss, Ben Wallace – and are also loyal to him at the moment.

It is now expected that Johnson’s opponents will more easily rise up against his policies and thus continue to pressure him. magazine the new statesman quotation a Tory who also remembers when former Prime Minister May had to move on after the vote of confidence in her: “They think, the Prime Minister is on his way out anyway, so this It’s normal to be upset.”

vote won The end is often in sight

Even a vote of confidence won is often a sign that the end is near for the prime minister in question.

63% support received from former Prime Minister Theresa May of her group in such a vote in 2018. She was weakened and resigned six months later, following disappointing results in the European elections.

66% of the band backed John Major in 1995, who wanted the vote itself to put an end to doubts about his European policy. He ruthlessly lost the 1997 election to Labor leader Tony Blair.

84% had Margaret Thatcher in 1989, the first of two times she was challenged to vote on her leadership. But discontent grew and for the second time in 1990, she obtained an absolute majority, but not the two-thirds majority as required by the regulations. Thatcher did not wait for the next round, she resigned under pressure from her cabinet.

A version of this article also appeared in the newspaper of June 8, 2022