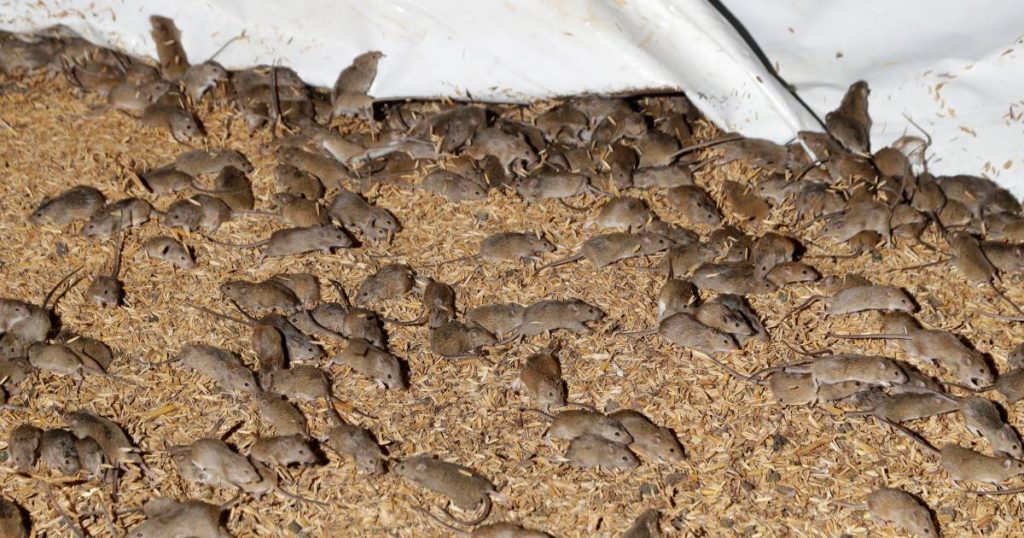 The plague of mice in the Australian state of New South Wales is getting out of hand. But despite the enormous damage rodents cause to agriculture, a request to use heavy rat poison was rejected by the local government today.

Bromadiolone, a proposed rat poison, has been described as “napalm for mice”. But the venom is just as deadly for animals that eat mice. Birds of prey, in particular, would be poisoned in large numbers if farmers were allowed to launch a bromadiolone offensive. Its use was therefore rejected. At the moment, other pesticides are being used which, although less effective, are also less harmful to other animals.

Mice have been a plague in eastern Australia for months. The locals are going crazy, as can be seen from various videos. Some farms are literally crawling with mice. Many farmers are in despair because the mice have destroyed various crops and grains. An emergency fund has already released $ 1 million for aid. A farm burned down this week after mice caused a short circuit. Insurers don’t cover a lot of mouse damage because they are “generally seen as something that a homeowner can do something about,” according to a spokesperson for a major insurer on Australian TV.

Many Australian farmers have already suffered from years of drought, fires and floods. Mice are no less destructive. According to researcher Steve Henry, the reason there are now so many is that the previous grain harvest was so exuberant. Rodents did well too. As a result, there would have been a surplus of mice at the start of the season. The fact that a pair of mice can produce a litter of cubs every two months has caused the huge numbers with which animals now cause so much damage to homes, supermarkets, schools and machinery. In many places, people complain about the stench of urine from mice and dead animals. According to local media, mice run over sleeping people and children have been bitten.

Yesterday a prison had to be evacuated because the safety of inmates and prison staff was at stake. 420 inmates at Wellington Correctional Center in the state of New South Wales had to relocate temporarily due to ‘construction work. essential recovery ”. Mice have made their way through suspended ceilings and also through cables that can cause automatic prison doors to open suddenly. “The health, safety and well-being of staff and inmates is our number one priority, so it is important that we act now,” a prison spokesperson told Australian media.

This is not the first time that such a plague of mice has hit Australia. It happens every ten years. But this time there are many. Some farmers catch as many as 1,000. Earlier this year, hospitals in New South Wales reported infections with a virus known as LCMV or lymphatic choriomeningitis. It would be spread by the many mice. Symptoms of the disease include fever, body aches, and vomiting. According to the Australian National Institute for Public Health and the Environment (RIVM), there are risks to people bitten by mice or exposed to rodent droppings.

See images of the mouse infestation below.