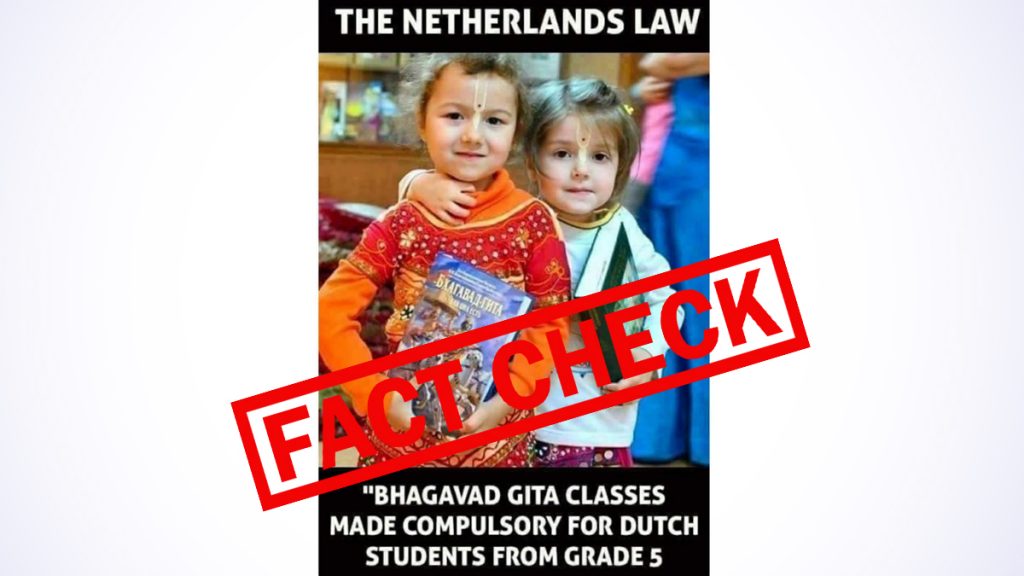 New Delhi, June 30: There is a lot of fake news circulating on social media and spreading false information to the masses. Recently, a post went viral on several social media platforms, including Twitter, claiming that the Bhagavad Gita had become compulsory for students in the Netherlands from the 5th year. The statement in the message is incorrect.

During a reverse image search in Google, the viral image, which is circulating with the false claim, was uploaded to the Iskon Desire Tree website in September 2013. In particular, the International Society for the Conscience of Krishna (ISKCON), also known as the Hare Krishna movement, preaches the teachings of Lord Krishna. Did the United States use the image of Mahatma Basavishwar on the $ 100 bill? The converted image spreads very quickly with a false statement; Here is the truth.

Here is the viral post with the fake claim:

This is not the first time this image has appeared on various social media platforms with a similar claim. Almost five years ago, the photo was posted on Facebook and Twitter. Meanwhile, the official website of the Dutch government does not mention the chapters of the Bhagavad Gita which have become compulsory from the 5th grade. The list of compulsory subjects on the website includes Dutch, English, Social and Environmental Sciences, Arithmetic and Mathematics.

A few days ago, an old photo of a river in Manila, Philippines also went viral, claiming the Methi River in Mumbai was being choked with plastic waste. Several social media users in India shared the photo with the false claim and likened it to the frontage of the Sabarmati River in Ahmedabad.

Recently She advises her readers to check the news before sharing it on social networks.

(The above story first appeared on LastLY on June 30, 2021 at 10:45 am IST. For more information and updates on politics, world, sports, entertainment, and lifestyle , log on to our Latestly.com website.)