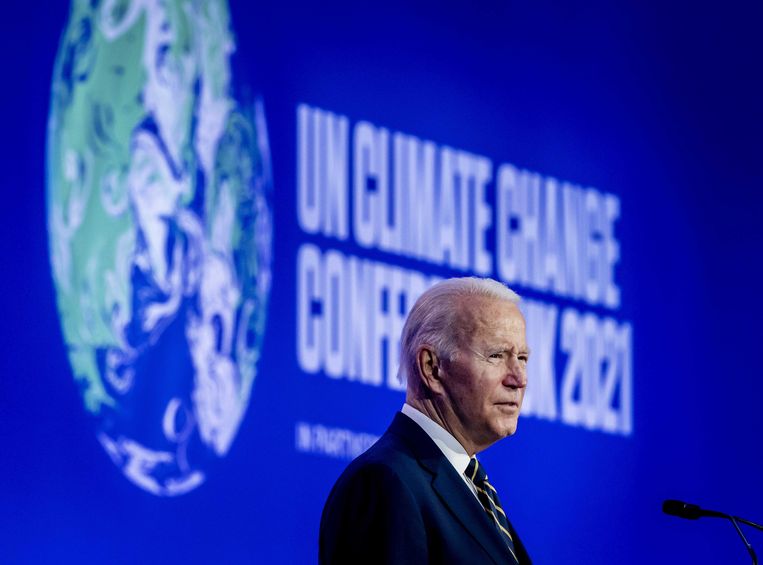 The climate summit in Glasgow is expected to be the highlight of Biden’s European trip. Was it an embarrassment that the president dozed off early on Monday?

“To be honest, that didn’t surprise me, given his schedule over the past few days. Biden might be 78, but at my age I would have been tired too if you see what Biden has been up to since leaving for Europe on Thursday. He then left Washington in an eventful atmosphere. Before leaving, Biden hoped for agreement in Congress on, among other things, his climate plans. He then wanted to show the world what the United States is doing in the fight against climate change in Glasgow. But the deal never came.

After arriving in Rome, he then visited the Pope, spoke to the G20 on restoring the deal with Iran, he settled the dispute with the EU over import duties, he had a difficult conversation with Erdogan over Turkey’s purchase of a Russian weapons system and attempted to settle the dispute with Macron over the controversial Australian submarine deal. And then he had to go to Glasgow. That his eyes were closed during the opening ceremony is a bit embarrassing for Biden, but that’s it.

Biden wants to shine with his climate plans. He’s been in the White House for ten months now. Will he succeed?

‘Not yet. His speech in Glasgow was therefore not very strong. It’s a weakness of Biden that he can’t show what his plans are now. He wants to show the way, he wants to show the world how the United States will do its part to reduce greenhouse gas emissions. Biden has a $ 550 billion climate action subset that will promote wind and solar power, increased use of electric vehicles, and climate neutral agriculture, but that has yet to be passed in Congress. ”

Has the United States, one of the biggest polluters, shown leadership so far under Biden?

“No, that’s a lot of rhetoric. This last sentence of his speech: “May God save the earth. Best sleepy. At such a time, it is better to show what the responsibility of the United States is and how you fulfill it as president. In his speech, he said he would announce new initiatives in the coming days. Who knows, maybe things will become clearer then.

Have problems in Congress surrounding Biden’s national plans hurt his position, including internationally?

“It doesn’t seem very strong that he can’t convince his own party of his ambitious ‘Build Back Better’ plan to renew America. When he left for Rome on Thursday, Biden said they would find a solution. But it was not at all clear whether conservative Democratic senators like Joe Manchin and Kyrsten Sinema and party progressives agreed with his stripped $ 1.7 trillion plan. This is considerably less than the 3,500 billion. billion that had been assumed.The very first Democrats plan even amounted to 6,000 billion.

“Next year there will be a midterm congressional election and Republicans will certainly use the Democratic struggle in the campaign. But if a deal is finally reached in the House of Representatives in the coming weeks, Democrats could sell it as one of the biggest and biggest social spending of all time, along with the infrastructure plan. It will then be their biggest trophy next year. But now Biden, with all the internal strife, looks weak.

Could Biden also take a serious blow in elections in various states today? All attention is focused on Virginia, where a Trump-backed gubernatorial candidate is fighting a neck-and-neck battle with the Democrat.

‘Absolute. Trump and Republicans will certainly use a Glenn Youngkin victory to show voters are turning away from Democrats in their eyes. Biden and the party are going to great lengths to prevent the loss of Terry McAuliffe, former state governor and well-known Democrat. Biden campaigned for him, as did Vice President Kamala Harris, who brought singer Pharrell Williams with him.

“If McAuliffe is defeated, there will be more anxiety in the White House and among Democrats. Frustration will also increase due to the lack of agreement on Biden’s plans. McAuliffe could have used such a deal in his campaign in recent weeks. He could have said: look what we have already achieved! Many of these social plans are popular with voters.