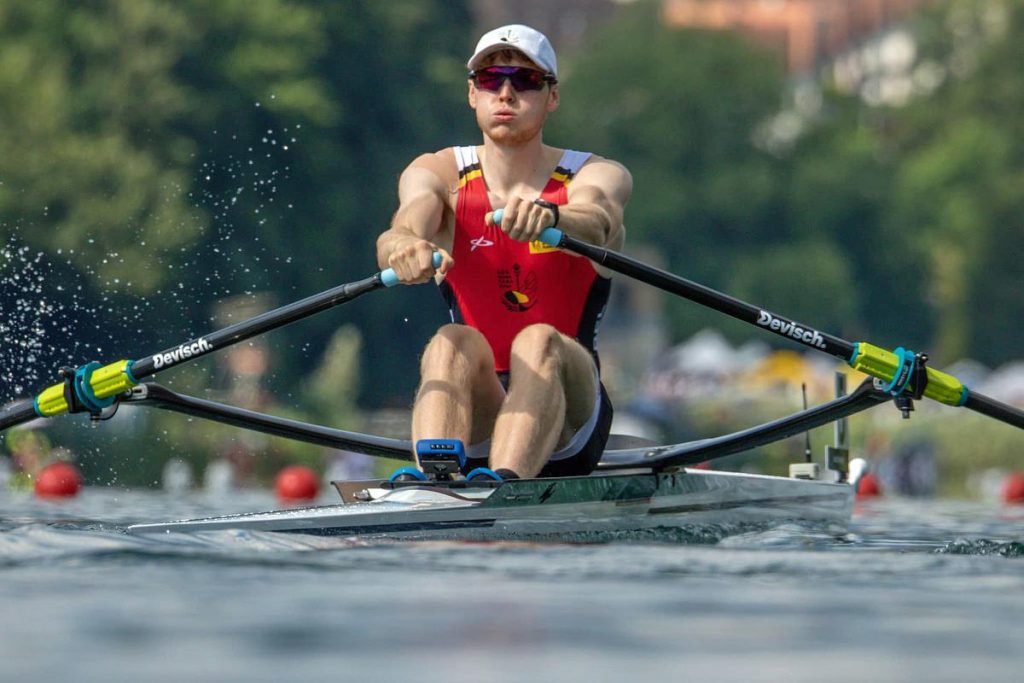 At the third and final Rowing World Cup at the Rotsee in Lucerne, Switzerland, Tibo Vyvey (KR Bruges) reached the final in the lightweight single scull on Saturday morning. In this final battle with six o’clock in the afternoon, he finished second. Six weeks ago, at World Cup I in Belgrade, he was good for gold. †

These performances between ‘the greats’ should give the 21-year-old rower from Sint-Andries confidence for his participation in the U23 World Championships at the end of this month in the Italian Varese, which is his main target this year and where he will be preparing already on Wednesday.

In Lucerne, the Belgian Sharks sought confirmation of their fine performance in Belgrade in four different boats. However, it was Tibo Vyvey who was the only Belgian, accompanied by Piet Graus as personal trainer, who could qualify for the A final. On Friday he was already head and shoulders above the others and he rowed in the lead all throughout the race until victory in the first heat, ahead of two Uruguayans in 7h08’32”.

In the semis, Vyvey was slightly faster and again finished first in 6:58’34”, half a minute ahead of Australia’s Oscar McGuinness. Rajko Hrvat, good for the money in Belgrade, secured third place in the final. In the final, which took place a few hours later, the Bruggelings achieved a good final sprint. From a tie for fourth place halfway through, he finished second in 6:48:72. Tibo only had to give way to 28-year-old Irishman Paul O’Donovan (6h47’15”). He has already won gold for his country in the lightweight double sculls at the Tokyo Olympics.

Niels Van Zandweghe (Brugse TR) and Marlon Colpaert (KRNS Ostend) now form a lightweight double pair. In the series with two Italian boats, they immediately ran into strong opposition. They finished fourth, but thanks to a victory on their second chance, the West Flemish were able to secure a place in the semi-finals. They finished fifth and will play the B final on Sunday morning alongside New Zealand, Spain, Portugal, the Czech Republic and Australia.

Young duo Tristan Vandenbussche from Bruges (21) and Aaron Andries (21) from Ghent are rowing in a tough double scull and, like Vyvey, have their sights set on the U23 World Cup this summer. Andries, vice-champion of Europe and vice-world champion U19 last year in single sculls and Vandenbussche, silver medalist at the World Junior Championships in 2019, showed with a victory in their second chance race that a promising future awaited them. Australia took first place in the semi-finals. Tristan and Aaron crossed the finish line in fourth place, three seconds behind their lead, Spain. With a seventh fastest time, they can confidently qualify for Sunday’s B final.

Also in Lucerne, there is a B final for the Belgian M4x that day with Ruben Claeys, Ward Lemmelijn, Gaston Mercier and Tim Brys after finishing sixth in the semi-final.