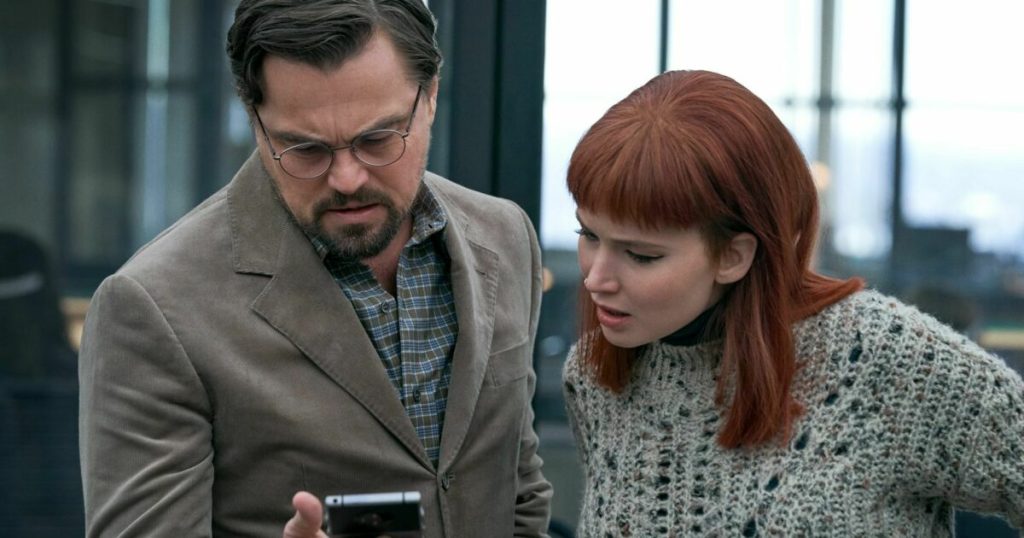 It’s the end of the film: our heroes, who we get to know in two hours, are sitting together at the table. They express their thanks as an inevitable apocalypse literally breaks through the walls. “I’m thankful we tried,” Kate Dibiasky (Jennifer Lawrence) told the group. A few minutes later, all of humanity is dead.

I’m glad we tried it. The sentence sums up the fatalism with which director Adam McKay’s Don’t Look Up plays well. The story in brief: Kate Dibiasky discovers a comet that is heading straight for Earth and will wipe out all life. She and her boss Randall Mindy (Leonardo diCaprio) try to get Trump-esque President of the United States (Meryl Streep) to take action. Ultimately, this leads to a multi-billion dollar plan with a tech company to detonate the comet and bring the tiniest pieces to Earth to harvest precious space rock resources, for cash.

Metaphor for the climate crisis

The film is clearly a metaphor for the current climate crisis. In the first place because of the apathy of those in power, who are constantly portrayed in this film as selfless, incompetent, greedy for money and aggressively stupid. A recognizable echo of recent years at the White House. But also by the two astronomers who, along with Teddy Oglethorpe (Rob Morgan), the boss of the Planetary Defense Coordination Office, are trying to convince the world that swift action is needed. The world is reacting with a split, between those who say “Look up” and see the comet brighter and brighter in the sky. And the group that says ‘Don’t look up’, and denies the existence of the approaching comet.

Sounds familiar. But as is often the case with Adam McKay’s films (from The Big Short and Vice Fame), the political message is drowned in a combination of too much intrigue and too much activism. McKay likes to pee about any issues. The film can be read as easily as a critique of pandemic politics or the myriad other issues that plague the world today.

The plot and script are just too confusing to truly captivate. A comedy, a drama and an apocalypse at the same time. The director also limps on different legs all the time in the way he shoots. There remains the message of the film: it will end badly if we do nothing. At one point in the film, Kate Dibiasky collapses when she shouts “We’re all fucking die” on a popular talk show. DiCaprio does the exact same thing later in the movie. We understood. McKay’s frustration with world leaders and lack of action in the face of existential crises are palpable and understandable. And the film strikes a chord: according to Netflix (still opaque on audience figures), the film is the third most successful of the streaming platform.

But agreeing with the political message doesn’t mean the film is good. The last half hour, where Lawrence quickly develops a love affair with Hollywood’s new golden boy, Timothée Chalamet (Yule in the film), is the strongest. This is also the part where McKay’s activism fades into the background and the film is quieter.

For a moment I thought, what if the tech entrepreneur’s (Mark Rylance) crazy plan worked and the comet disappeared. It would deliver an interesting message: Big companies end up providing a solution, but the associated risks were irresponsible. It would give the film a more surprising and ambiguous ending, in which it’s still clear that the techbro and Meryl Streep got it wrong, but luckily got it right. Because in the end, a lucky and invulnerable elite is more realistic than the end of humanity.