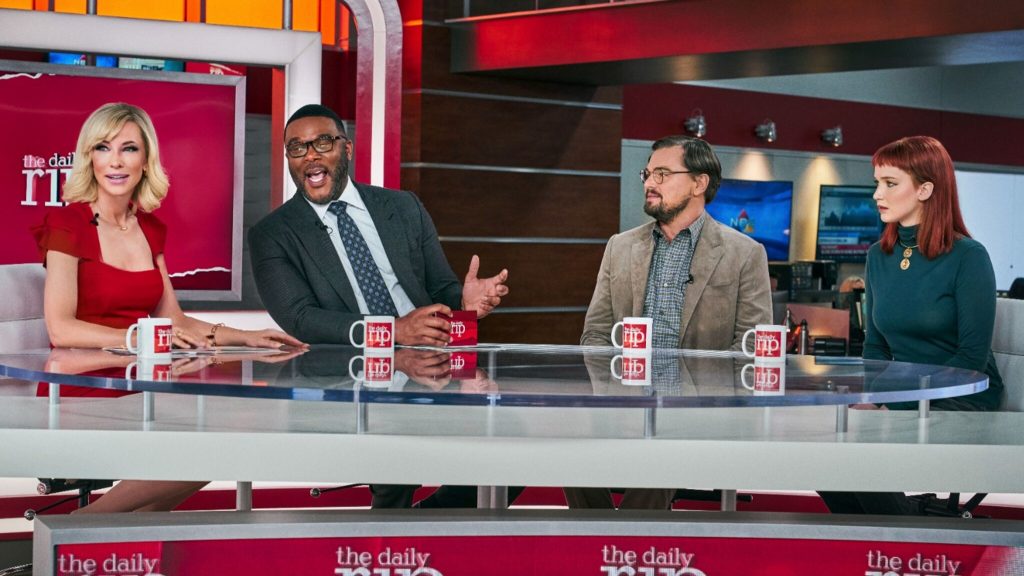 The satirical sci-fi film starring Leonardo DiCaprio (Randall) and Jennifer Lawrence (Kate) has sparked debate on social media. Climate scientists and activists are raving about it, but most movie critics denounce the film.

“This is the most accurate film about society’s terrifying non-response to the climate crisis that I have seen,” writes the climatologist Pierre Kalmus. “Lovely #DontLookUp. Especially since he’s also wiping the floor with top-level climate cheaters,” tweets Party for the Animals leader Esther Ouwehand.

“A laborious, self-confident and relentless satire,” writes film critic Peter Bradshaw in The Guardian. “Look Not: A Cosmic Catastrophe. Even Big Names Like DiCaprio, Streep, and Lawrence Can’t Save This lame Joke From A Movie,” headlines The Wall Street Journal. “This is not a movie that has something special to say”, writes The daily beast.

“Science has not been heard”

We will explain to you later why the critics denounce the film. First the climatologists and activists: they are fans. But why? “If I’m honest Hollywood blockbusters aren’t quite my genre, but I found it interesting because it was in my field,” says climate scientist Maarten van Aalst of the University of Twente.

Van Aalst sees many similarities between the film and the present. “This is science that is not heard by politicians. Politicians seek a politically feasible story, while scientists indicate that there is no choice in what is possible and what is not. You can. now see it in the movie They are very clear in their position that something must be done, only the sense of urgency in politics is lacking.

Climate activist Freek Bersch agrees. He thinks the film shows how politicians regard the image as more important than tackling the problem. “The film shows that politicians do not dare to face reality for fear of losing voters. In the Netherlands, politicians are also afraid of this.”

“Just look at what Mark Rutte said at the climate summit in Glasgow. He said we don’t have a be able to lead a more ambitious climate policy because the VVD voter will then vote for far-right parties in the future. “

The film also shows how the media treats scientists who warn of major (and sometimes uncomfortable) issues, Bersch says. He remembers a scene where the frustrated and sad scientist Kate walks away from a talk show because she feels misunderstood. “She is laughed at, when it’s a logical reaction to what’s going to happen. Only her story is not appealing because it seems negative, abstract and distant. This also applies to the story of the weather.”

Scientists also have a responsibility in this regard, says Van Aalst. “It’s about putting a difficult message in the spotlight. Second, it’s important not to use technical language.”

The climatologist and activist is uncertain whether the film also helps solve climate problems. “But the film looks like a helping hand,” Bersch says. “One movie alone will not change the world. But if it gets people to change their behavior, it makes progress,” says Van Aalst.

As mentioned, movie critics are less of a fan. This is hardly surprising, says Mark Deuze, professor of media studies at UvA. “Ultimately, climate science work is portrayed in a real and nuanced way, while media work is portrayed commercially, superficially and poorly. We see the traditional image of media, as we often have. seen in movies. “

The interaction between presenters and climatologists is typical, says Deuze. “They are primarily concerned with the way someone acts and looks, not at all with the content. This is the classic media and journalism criticism that returns in Hollywood movies. Only this criticism is completely outdated.”

“Scientists today are no longer completely dependent on television, but can also express their opinion on social networks. That’s why you see so much frustration in people who know a little bit about cinema and the media. where media criticism is more nuanced. “