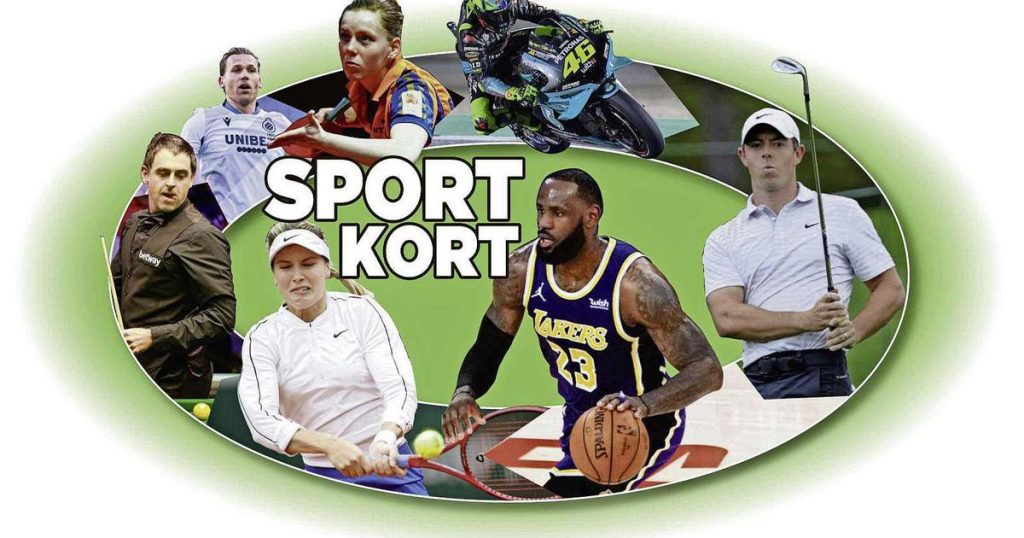 Juventus without attackers Dybala and Morata for the moment

4:37 p.m.: Juventus have lost forwards Paulo Dybala and Álvaro Morata so far. They both suffered a muscle injury during Sunday’s match against Sampdoria in Italian Serie A. The Turin club report on its website that the attacking duo will not be available again until after the international break in October.

Dybala was injured just after his first goal against Sampdoria. The Argentinian left the field with an emotional limp. The examination revealed a thigh injury. Morata also had to be substituted towards the end of the game, which Juve won 3-2. The Spaniard suffers from a hamstring injury.

Juventus coach Massimiliano Allegri will miss Dybala and Morata at least on Wednesday in the Champions League home game against Chelsea and in the city’s derby with Turin on Saturday.

Motocross of Nations in 2022 in the United States

2:34 p.m.: The 2022 edition of the Motocross of Nations will take place in the United States, on the RedBud circuit in Michigan. This became known after the completion of the unofficial world championship for national teams, which took place this weekend in Mantua, Italy.

In 2018, the RedBud circuit already hosted the Motocross of Nations. Then France triumphed over Italy and the Netherlands.

The victory went to Italy on Sunday, ahead of the Netherlands and Great Britain.

13:07: Handball players Nikita van der Vliet and Nyala Krullaars will miss the Netherlands’ next international matches in the European Championship qualifiers against Belarus and Greece. Interim national coach Monique Tijsterman has called in Lynn Knippenborg as a replacement.

The Orange squad will play Belarus in Almere on October 6. Four days later, a game against Greece is scheduled. Tijsterman announced last week that Estavana Polman will join the Dutch women’s team. The Dutch star has recovered sufficiently from his knee injury.

Polman will build with care. She is not yet playing in both games, but will follow the training sessions. Lois Abbingh is the most notable absentee from the Orange team. The top scorer is not physically fit and skips the international match.

Tijsterman is the temporary successor of Frenchman Emmanuel Mayonnade, who did not extend his contract as national coach after the Games. She will stay until the World Cup in Spain in December.

13:07: Marcus Rashford hopes to be able to resume training at Manchester United soon. “I will speak to the doctor on Friday and I hope I get the green light soon,” he said on Twitter.

The 23-year-old forward underwent shoulder surgery on August 6. He has since been sidelined. Rashford has already missed eight games against United in various competitions. He is also absent this week against Villarreal and Everton.

Valverde returns to the Tour of Sicily

12:42 p.m .: Alejandro Valverde (41) will return to the Tour of Sicily on Tuesday. The veteran Spain will be in action for the first time since his heavy crash in the Vuelta a España. On August 20, he broke his right collarbone in the seventh stage.

In early September, Valverde confirmed that he will still be active as a professional cyclist next season. At the start of the year, he notably won a stage in the Dauphiné. In Flèche Wallonne, he was third, in Liège-Bastogne-Liège fourth. The Spaniard wants to end his season in the Tour of Lombardy, which will be held in October.

Italian Vincenzo Nibali, Frenchman Romain Bardet and four-time Tour winner Briton Chris Froome will also be at the start of the four-day Tour of Sicily, among others.

11:02 am: Cyclist Michael Schwarzmann will cycle for Lotto Soudal for the next two seasons. The 30-year-old German is ready for a new challenge and is leaving Bora-Hansgrohe after ten years.

“It’s time for something different,” says Schwarzmann. “I didn’t hesitate for a second when I had this chance. In recent years, I have worked with sprinters such as Pascal Ackermann, Sam Bennett and Peter Sagan. Next year it will be Caleb Ewan.

9:19 am: Tennis star Naomi Osaka hopes to return to the court in the near future. The four-time grand slam winner from Japan says she has regained her motivation. She hasn’t played much in recent months due to mental issues.

In May, Osaka withdraws from Roland Garros. She disappointed at the Olympics in her own country and after her loss in the third round of the US Open, she said she would take another “break” to resolve her issues.

“I still think tennis is a wonderful sport,” Osaka said in an interview with HBO. “I will definitely be back and most likely in the near future. I’m starting to want it again. It doesn’t really matter to me if I’m able to win tournaments again. If only I could be there again.

8:33 am: Racing driver Alex Palou won the American IndyCar racing series. He is the first Spaniard to succeed. He finished fourth in the Long Beach Grand Prix last weekend, making him inaccessible for the rest. Palou, 24, has only competed in the IndyCar for the second time this season.

The Long Beach race was won by Colton Herta.