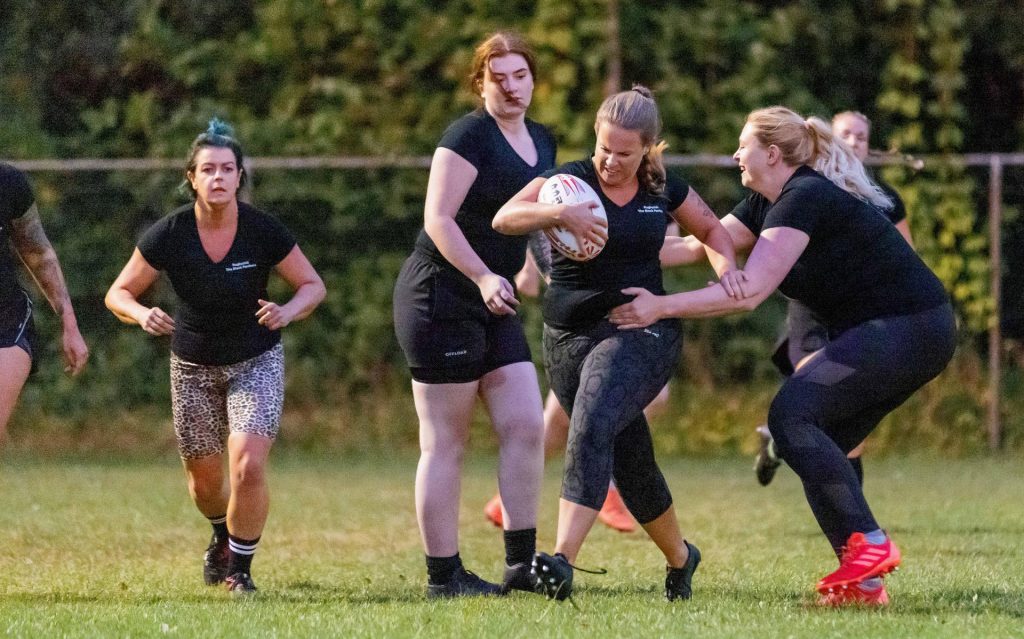 Two years ago, Ilse started playing rugby with a group of friends. Aux Grosses Pierres in Havelte. “When I started two years ago, the only thing I knew about rugby was that you had to go forward and backward,” says Ilse. “I didn’t even know it at the time,” Priscilla Oord laughs.

They play at Havelter club in the third division, but there is something that itches them. “It is our wish to put women’s rugby on the map,” said Natasja Oord. “With our own association, we hope to lower the threshold for girls even lower,” says Ilse. “It is also a spearhead of Rugby Netherlands. He also wants more attention to be paid to women’s rugby. “And that doesn’t just concern the players, but also the coaches, board members and referees, Ilse explains. Gwen Barth laughs:” I think so. that we have already achieved rugby union’s goal of having x percentage of women in rugby. ”

Ilse Jansen, Natasja Oord, Priscilla Oord, Gwen Barth, Wilke Huberts and Denise Gruppen sit on the outdoor terrace of the MSC football club at the Meppeler Ezinge sports park. Sports clothing, rugby shoes. It’s training night. Every Monday and Wednesday evening, at 7:30 p.m., they receive training from Robert Plaizier. “He lives for rugby,” says Natasja. “He continues to teach us new things,” says President Denise Gruppen. “You think you’ve mastered something, then he comes up with a new tactic. ”

The famous rugby posts are not yet on display at the Ezinge Sports Park. The club are currently playing on a lighted grass track, next to the main MSC pitch. The ladies wrote to MSC for help with their idea for a women’s rugby club. After all, they need a field for training and also facilities such as a locker room. “Arjan Jonkers (president of the MSC, editor’s note) did not doubt it for a moment. He immediately wanted to get started with us, ”says Natasja, laughing.

Rugby is known as a tough, physical sport. But that’s not the case at all, explain the enthusiastic ladies. Gwen: “Rugby is a combination of everything. You have to work together. Between big and little girls. Speed ​​and physics. Natasja adds: “Rugby is everyone’s sport. You need everyone. Not a specific type of player.

Rugby is even more than a sport, according to the ladies of the Black Panthers. “It gives confidence. You see that you can handle a lot more than you think. You learn to trust others ”, that’s how Natasja describes it. “If you are being tackled, you have to trust someone else to take over your task,” Ilse adds. “It’s also about learning how to communicate, how to attack and where the ball is. The tactical aspect is what makes this sport so fun. Gwen describes sport as a

Wilke: “Some girls may not dare to play rugby because of prejudice. We hope to lower that threshold so low that they will come. They get the full

. Trust is a priority for us.

Denise emphasizes that everyone’s talent is put to good use. Not only on, but also off the pitch. She mentions the logo as an example: “We have a

(Ilse, ed.) In our team. You have to take advantage of it, ”says Denise, laughing.

Before the start of training this Wednesday evening, the new jerseys will be distributed. Black, with the logo on the back, with purple reflections. Gwen is already proudly showing off the back of the shirt. She loves leopard prints. She also wears sports shorts with a leopard print on them.

The name The Black Panthers actually started out as a joke. While the ladies are having fun on a car ride, back from training in Havelte, Gwen comes up with the name Panthers. Natasja then thinks of something black. With reference to

: the nickname of the New Zealand rugby team, which always wears a black outfit. The name therefore became the combination of these two.

It characterizes the group. The ladies love to have a good time. “And we love to cuddle,” Ilse also sums up. Denise: “We really like to throw parties. They also have the same passion for rugby. “Be careful that it doesn’t become addictive,” Gwen laughs. “We try to follow rugby as much as possible,” Ilse adds. „But then you have to look for

, because it is so little diffused. The Netherlands-Belgium Super Cup game was watched recently. “We don’t just look like a rugby fan, but also tactically. Because then our coach asks what we notice about the game, ”says Denise.

The ladies hope to be able to participate in the competition next year. You will need your own field for this. The girls discuss this with MSC, to see what the associations can do for each other. Ilse: “We can discuss with the rugby union whether we will only play away games in the first half of the season, so that we have time to build a pitch in the meantime.”

And to be able to play competitively: you need enough ladies for that. “You’re in the field with 15 ladies,” Ilse says. To make a full season, you need to double it, she said. “There are always nights when people can’t, and you have to have reservations.”

The group is therefore busy finding new women. This is why an introductory evening will be organized on Wednesday, September 29, at 8 p.m. Training is allowed with each training. “We always get 1 or 2 new members per formation. It’s already beautiful.

The club is not just looking for women. Building a youth team is also on the wishlist. “I think it would be great fun to pass the passion for rugby on to the young members,” said President Denise. Although they all stress: “The club is open and accessible to everyone. So anyone who wants can participate in the training, but we focus on women and girls. ”