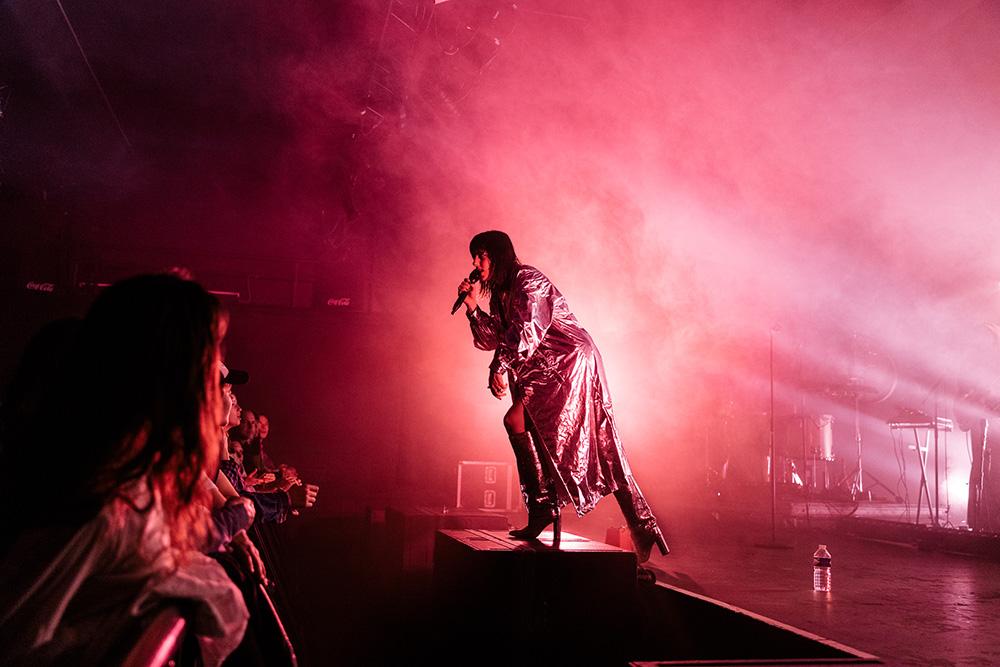 The organization would no doubt have preferred it otherwise, but for the moment it seems that the PLAY Festival is a kind of farewell party for the Muziekodroom. The Hasselt concert hall will be forced to close its doors from next year due to financial problems, but fortunately did not give up easily. The annual indoor festival was and will continue this year, and some fine names have been thrown up for it. For example, Friday and Saturday were respectively curated by Sylvie Kreusch and Whispering Sons, who thus opened their richly filled address books. Yesterday, for example, we were able to enjoy some nice sets from Sam De Nef, Pitou, Bolis Pupul and of course headliner Sylvie Kreusch. 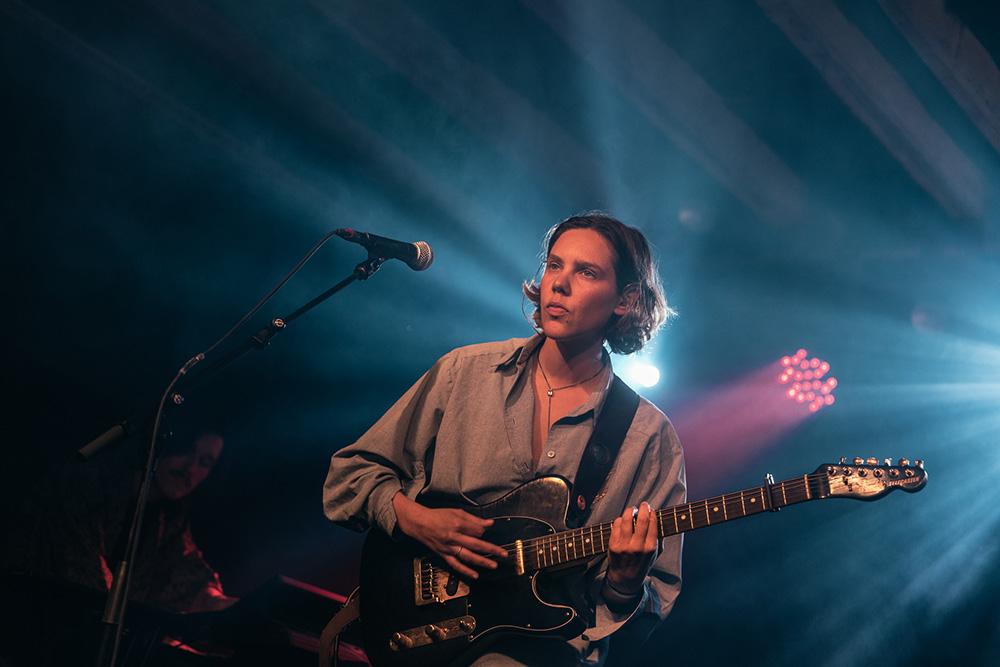 In any case, the reason for the money problems within the hall did not seem far-fetched, as ticket sales were also very disappointing yesterday. It’s all the more unfortunate if you can open quite early in the evening, just ask The Visual. The quartet had to make do with a fairly sparse club, but luckily it didn’t touch their hearts. Initially, dreaming seemed to be central, but as the set progressed, it was often the grand and intense excesses who took over. In this respect, the singer Anna van Rij played a particularly important role, because with her engaging voice she increasingly established herself. The melancholic, somewhat psychedelic instrumentation was the perfect complement to get us completely into a trance at times. The fact that the singer also sometimes lets the guitar screech itself was definitely an added bonus. In other words, the Amsterdam team gave a great kick-off to the evening. 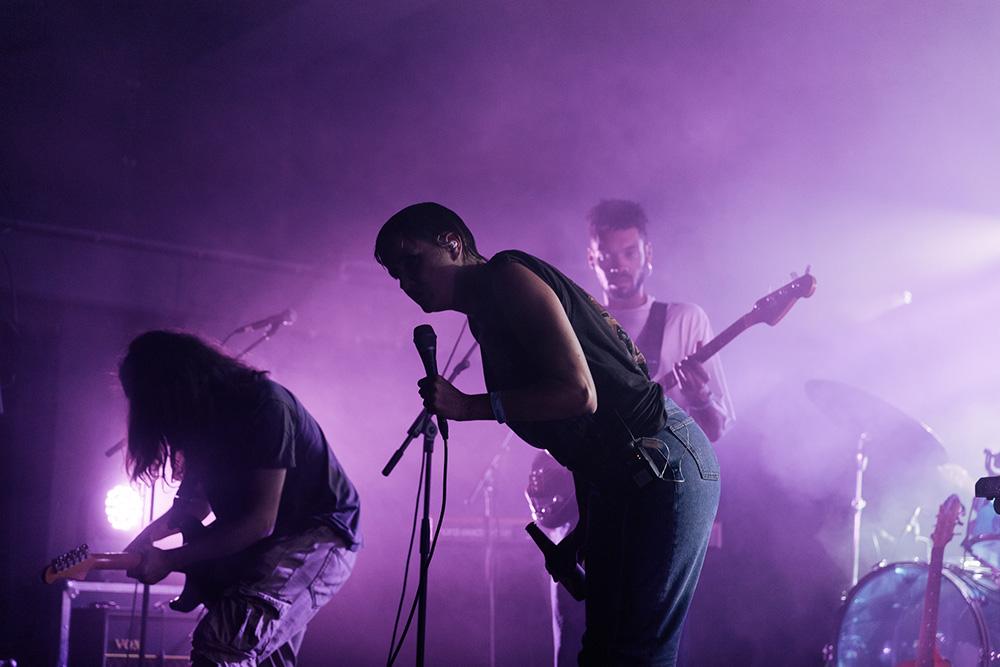 Without a doubt, the band that has been on the road the longest is Princess Chelsea. All six came from New Zealand, but unfortunately didn’t quite play up that international appeal. Despite the rather rough music, it was strangely very static on stage, which made it feel a little less professional at times. The idea was indeed there, because the chaotic mixture of guitars and xylophone, interspersed with the rather nonchalant voice of the singer, certainly took off. The fact that Princess Chelsea’s music sometimes leans a little more towards punk, then a little later that it sounds like a little harder version of Sylvie Kreusch, also testified to the fact that it lacked a kind of common thread. . Still, it certainly couldn’t be called a bad set, because musically everything sounded very tight and as the concert progressed everyone seemed to loosen up a bit. The lead guitarist in particular stood out at times, so he provided a nice push at times. In short, a great discovery, which could certainly break through with a little refinement. 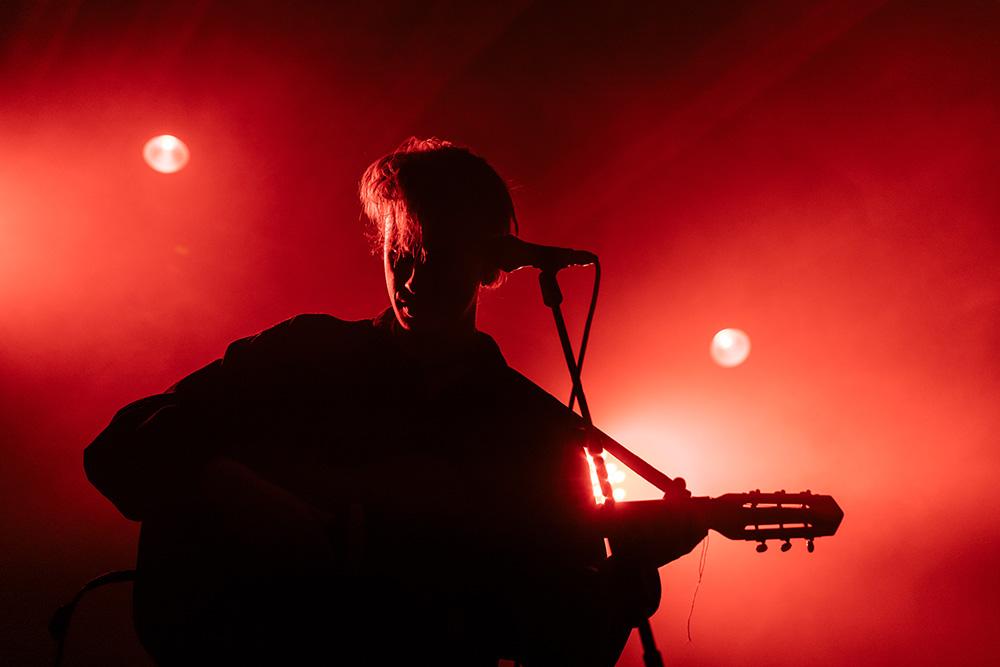 Fortunately for Sam De Nef, the Club had already filled up a bit, which is quite true. Unfortunately, the set ran into some trouble, as it quickly ran into technical issues. Once they got off the beaten track, he completely immersed us in the universe of his first album. Dawn/Dusk. The fact that it turned out so well live was mainly due to the countless details the Antwerp native took into account. We counted five musicians on stage, who each added an extra layer to the mix in their own way. Sometimes we imagined ourselves in a beautiful forest, but also in a dark alley. The fact that Sam sounded a bit like Tamino live at times, albeit without the oriental atmospheres, can be seen as a nice compliment. With live saxophone, lots of electronic extras and of course the captivating voice of the frontman, it was simply an enchanting passage. 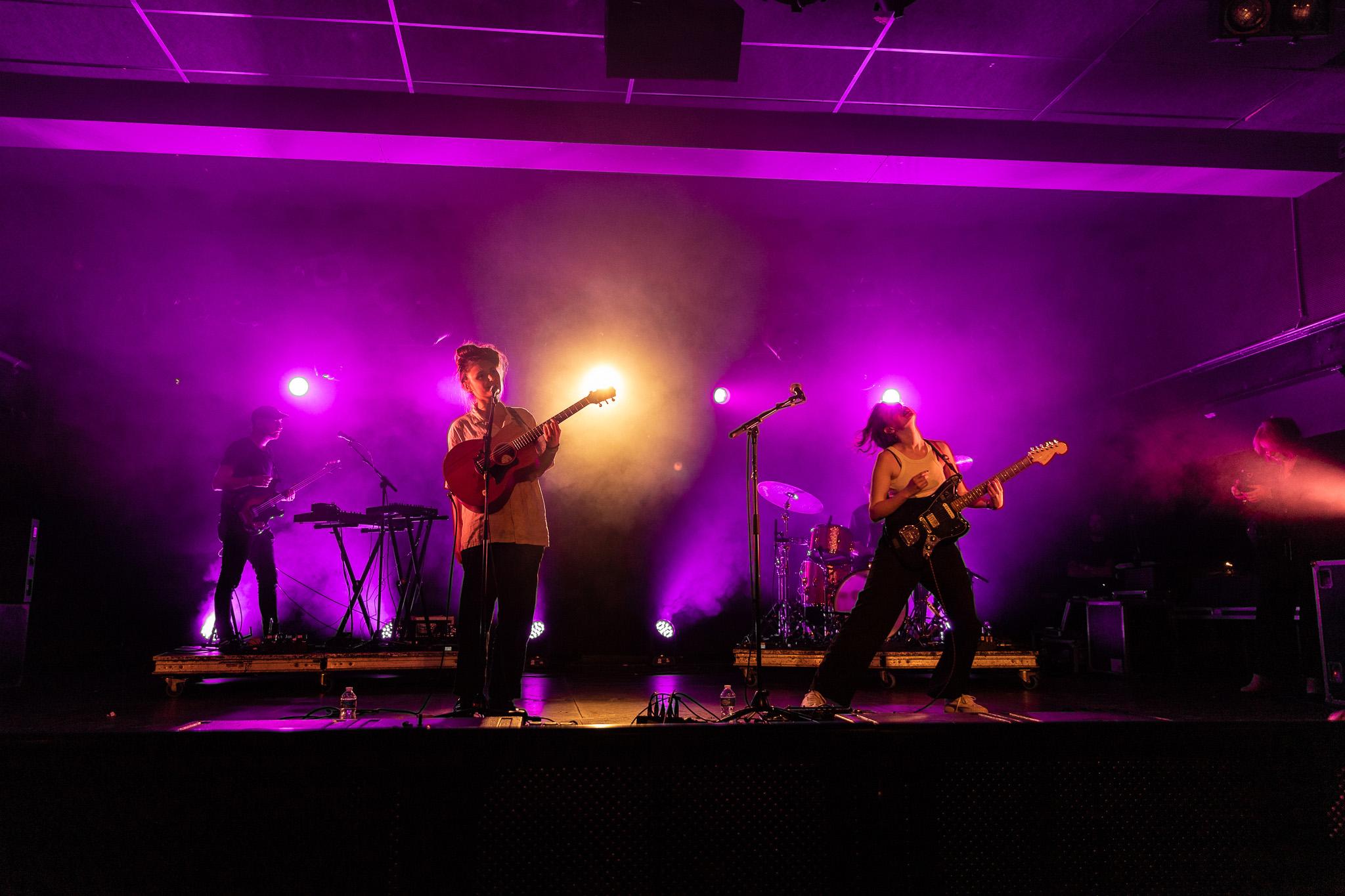 Despite winning at De Nieuwe Lichting, Kids With Buns didn’t get off to such a quick start as their peers. Still, the duo are under more and more pressure these days, because with a EP, maybe a first album in sight and a new live, it sounded a little bigger. The ladies’ enthusiasm naturally played a major role in this, but the added drums and electronics also provided a more layered effect. Where Kids With Buns in the past sometimes dared to stay put, progress was now clearly audible. The fact that the duo’s music blended perfectly into the line-up also made it possible to present a reasonably full Box with a great concert. In other words, the duo is doing well.

Kids With Buns is playing again this fall in VIERNULVIER Ghent (November 3), Trix Antwerp (November 17) and The Depot in Leuven (21 November). 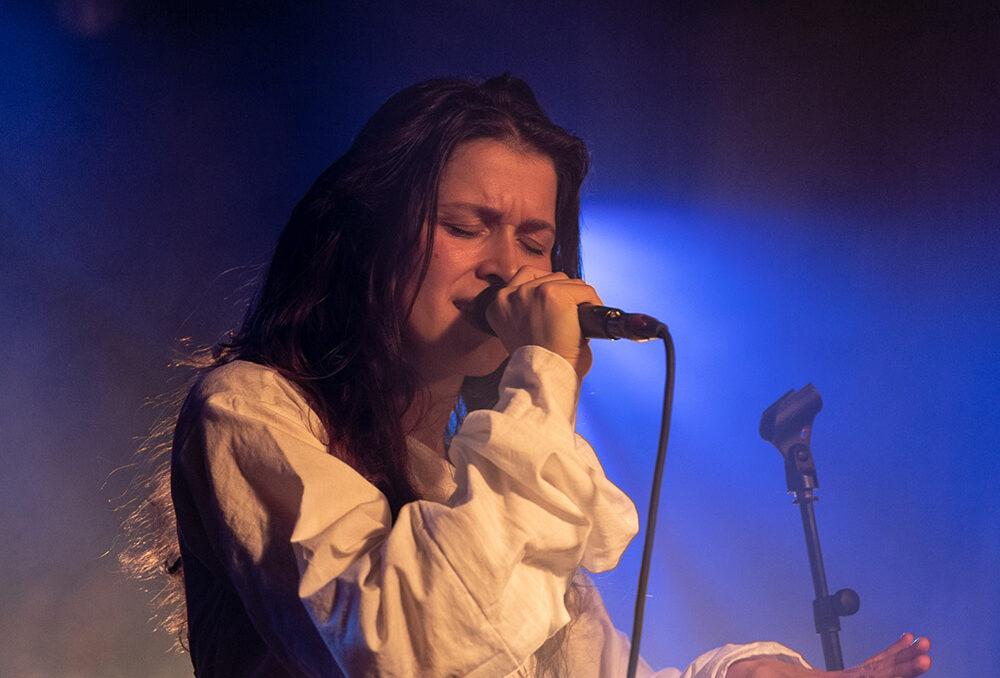 With shows supporting Eefje de Visser, Rock Werchter and Pukkelpop, Pitou seems like a pleasant name to watch. The Dutch youngster may have been busy for a while, but it’s mostly her new project that everyone is looking forward to these days. We also heard some material yesterday, but what stands out the most is that the singer fared better in the dark club than on the biggest stages. She was a lot less shy that way, which also benefited her show. It gave the songs a little something extra, although of course his band, including a live saxophonist, had something to do with it too. Pitou was very dreamy in the Muziekodroom, but at least just as intense. 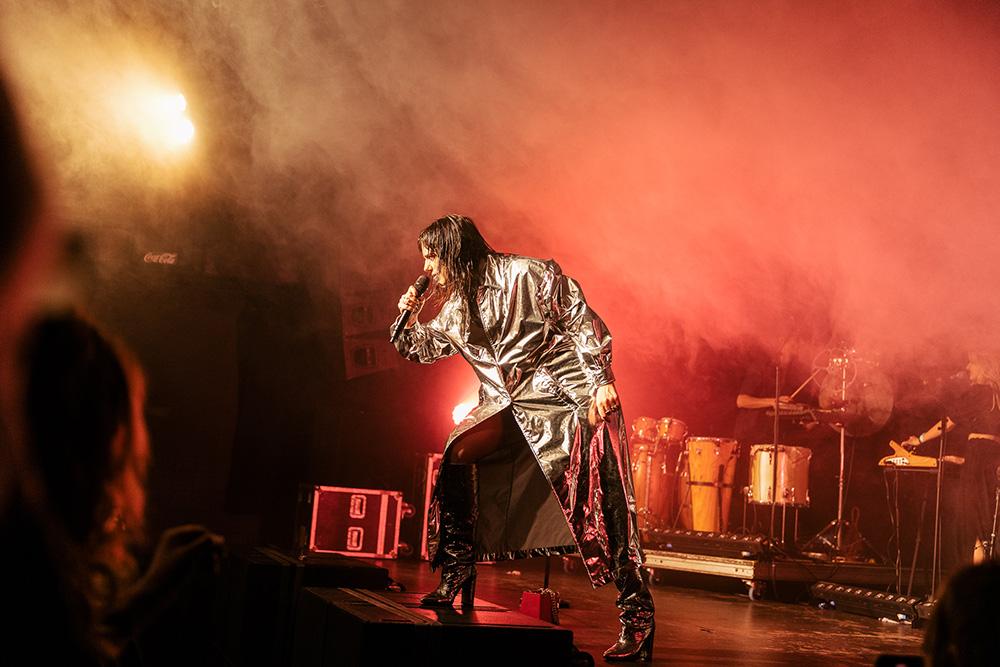 Because Sylvie Kreusch, as curator, could immediately qualify as the headliner of the evening, the Box was full for the arrival of the singer. Rightly so, because with Kreusch it’s no longer a question of whether, but how good it will be. The fact that she’s been on pretty much every stage for the past few months could lead to a kind of autopilot. Fortunately, nothing could be further from the truth, because yesterday everything seemed very fresh. This may be due to new addition Jente Neels, who recently took over bass and synths.

Anyway, it is as always Sylvie herself, who bathed in a roll of silver paper for the occasion, which draws all the attention to her. With “Falling High” and “Let It All Burn”, the set already had some highlights from the start, words like “sensual”, “intense” and “conjuring” fit better. “Shangri-La” then proved to be a highlight due to its great instrumentation, after which “Girls” once again excelled in its intimacy. In the end, unfortunately, we had to put the party on hold, as technical issues caused incorrect “steps” – or barks, if you will – on “Walk Walk”, which took a bit of a toll momentum. Anyway, Sylvie remained herself and just sprinkled the confetti a few moments later. The closing duet “Just a Touch Away” / “Please to Devon” provided icing on the cake with its epic instrumentation. In other words, Sylvie Kreusch made it start again.

Sylvie Kreusch will still be standing in the months to come in De Roma in Antwerp (December 10) and at the Old Belgium in Brussels (March 30). 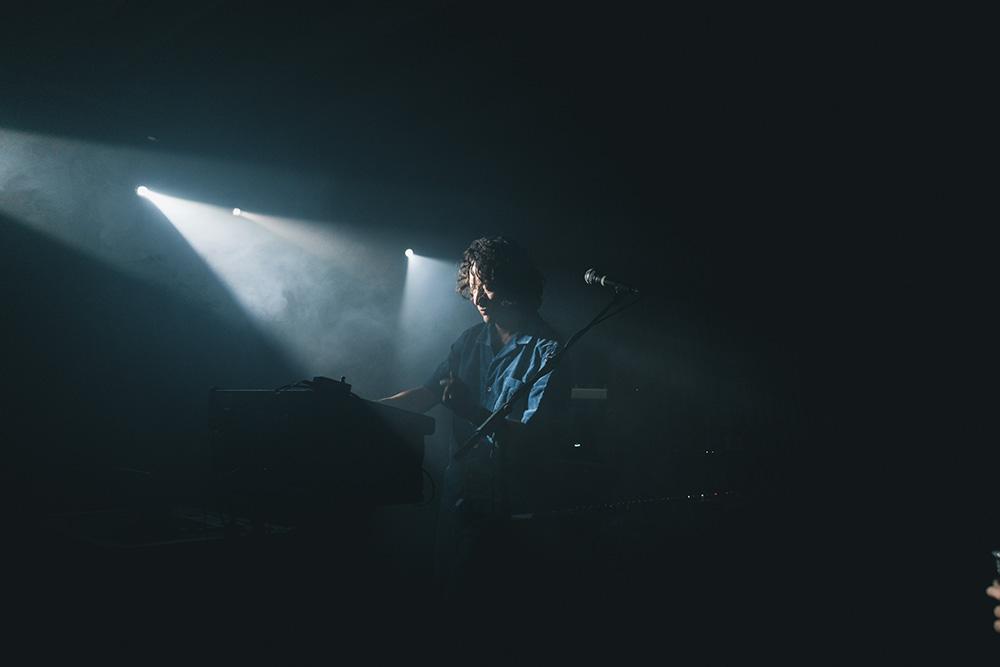 To go dancing at night, we had a more than fitting closing of the first day with Bolis Pupul. Barely returned from the United States, where he was the first part of Grace Jones with Charlotte Adigéry, he just hit hard yesterday in Hasselt: Bolis can do it. With an arsenal of synths and electronics of all kinds, the man made the Club move smoothly, because with the beats he fired at us, he even made the parquet vibrate. The ideal end to a dreamy, intense and therefore successful first day of PLAY Festival.

Bolis Pupul will be alongside Charlotte Adigéry this fall at the Cactus Club Brugge (October 28), at Trix Antwerp (October 29), in VIERNULVIER Ghent (November 4) and at Het Depot in Leuven (November 5).