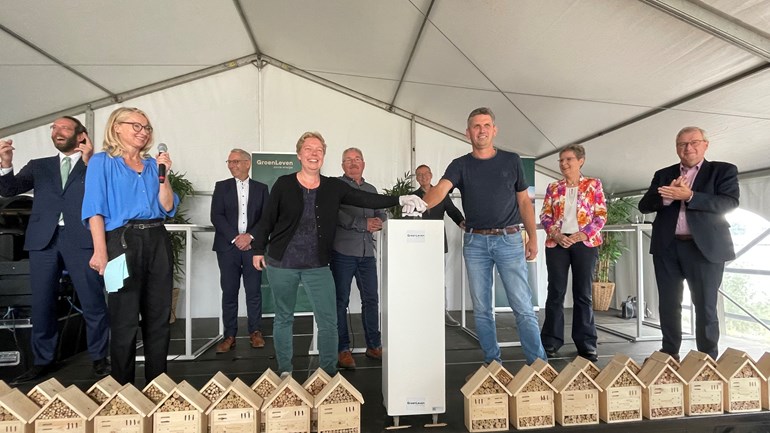 It is a solar park as they prefer to see it in the municipality of Midden-Drenthe. Not on agricultural land and in cooperation with the environment. But it took a lot of work to make it work.

In the tent by the water, where the opening act takes place, we quickly understand why it took years to get to this moment. There are many parties involved, all with their own interests.

The interviews take place on stage in several rounds. Promoter of the GroenLeven park, the province, the municipality of Midden-Drenthe, the Water Office, the cooperative project De Mussels and the owner of the lake De Reimert Groep all have their say. The common denominator is that they all want to focus on sustainability and contribute to climate goals.

Plans were drawn up for the floating solar park five years ago, explains director Erik Kijlstra of the Reimert Group. The water twenty meters deep has proven to be unsuitable for making a recreational lake. And that’s how a solar park came into the picture. As far as he’s concerned, it could have been a bit faster. “It just takes and it lasts, but it’s not sustainable. As a company, we don’t just want to talk, but take action.”

This message also comes from the other GroenLeven company present. CEO Roland Pechtold believes that the process of building a solar park takes “a hell of a lot of time.” His company is installing solar parks all over the Netherlands and he knows the support of local residents is needed. “We want that too.”

But when it comes to Pechtold, the processes need to be faster. “We really have a task as people. We will only know if we do enough in ten, twenty, thirty years. But 2030, it will already be in eight years and three months”, he indicates the important reference of the climate agenda. In that year, the Netherlands wants to emit 49% less greenhouse gases compared to 1990. It already seems that the Netherlands will not meet these targets, concluded the Dutch Assessment Agency. environment in 2019.

Politicians in the tent are also indicating that they would like to take action quickly. But MP Tjisse Stelpstra also puts his finger on the sensitive point. “Space in the Netherlands is extremely scarce. We are competing against each other. Nevertheless, more and more solar parks will appear in Drenthe in the years to come. “The landscape will change, you just have to get used to it. We prefer to use the space to the maximum in several ways, like here and with solar panels on the roof.

Alderman Jan Schipper also prefers this “dual use”. “We want solar panels on all available rooftops. Local ownership is also important. The profits must be donated to the municipality of Midden-Drenthe.

It is precisely the latter that has not yet been fitted to the solar park on the water. Local energy cooperatives are often made up of volunteers, unable to keep pace with professional organizations. For the moment, the local community does not benefit from the Mussels. The Coöperatie De Mussels project is working in collaboration with the Drents Overijsselse Delta Water Board on the acquisition of 51 percent of the shares of the BV in which the solar park is located. “It takes a lot of money,” says President Kees Kuik. Residents and local businesses can invest.

When it turns out that the local cooperative is part-owner and can therefore share the proceeds, the loans must first be repaid. In a few years, the first money generated by the electricity produced will actually flow to society. Then, local projects can be supported, for example in the field of sustainability.