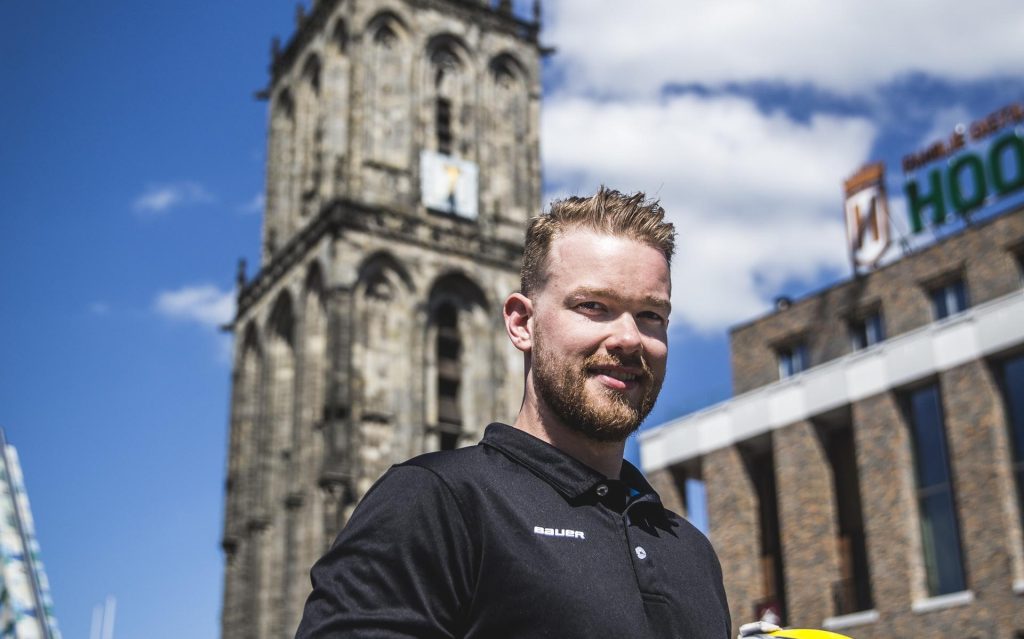 Martijn Oosterwijk in front of the Martinitoren PHOTO: Siese Veenstra

Goalkeeper Martijn Oosterwijk (31) from Groningen will start his seventh Ice Hockey World Cup in Croatia on Monday. “I think we belong on a higher level.”

Hi Martin, how are you? Already on the way?

,,Hello! Yes, on the way, but not yet in Croatia. I am now driving from Groningen to Tilburg for the last training session with the Dutch team. I will cover another 500 miles today. We’re waiting impatiently. Especially because, of course, hardly any international matches have been played in the past two years.

You will play in Division II-A next week against Spain, China, your home country Croatia and Israel. Not exactly the best ice hockey countries, I guess?

,, No, not that, ha ha. The Netherlands are now playing in the fourth tier. When we are promoted, we play in Division IB. Above are the IA Division and the Premier Division, which includes top countries like Canada, Finland, and the United States. Of course, we can’t match that, but Division IB, which we’ve played in before, really has to be doable. I think we belong at this level.

What are your chances of being promoted?

,,It is still a bit difficult to estimate, because international ice hockey has also been silent for about two years. We have to win the group, then we get promoted. I think China will be the strongest opponent. This team also played as a host country in the Winter Olympics, of course. Then comes Croatia, then Spain and Israel, I guess.”

With UNIS Flyers Heerenveen you recently won the BeNe-League, the Dutch and Belgian championship, after the national championships went to HIJS Hokij. Another good year?

“Yes, you can say that. We are particularly happy that everything has started again. It is good that it is again possible, for a full stadium, to play ice hockey. I’m also very excited about it.

Are you a professional athlete as an ice hockey international?

“No, if only that were true. I finished my studies in sports management last year and recently started working in a watch and jewelery store in the Stoeldraaierstraat in the city. very good.”