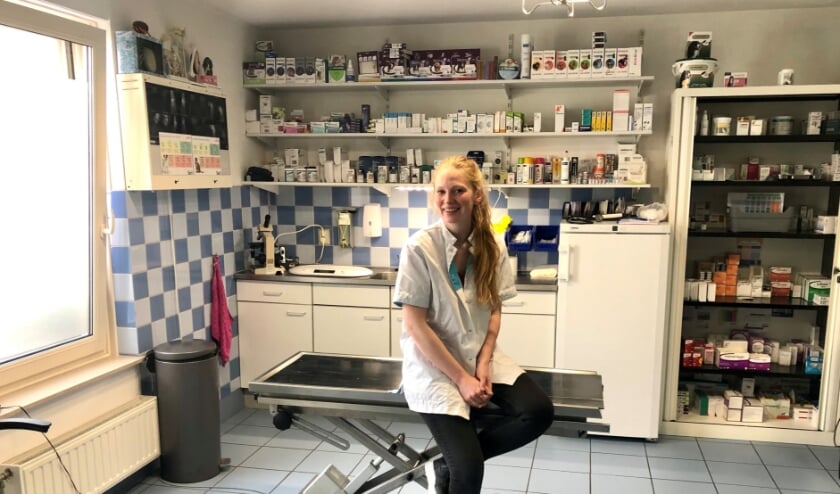 Henk van Dijk has asked Fien Cnockaert from Erpe-Mere (East Flanders) to continue the vacant practice in Goes as a permanent veterinarian within the partnership. “Actually, I entered into an adventure. I knew someone from Lingehoeve and heard that he was looking for a vet for a mixed practice (horse and pets) in Zeeland. After graduating in the summer of 2021 (horse specialization with pets, editing), it was a dream opportunity. At the Lingehoeve they said “if you like you can come and work for us until it starts in Goes”. There I gained a lot of experience with the people and the culture. I crossed the threshold here on January 3rd. Everything was new, I had never seen the location inside before. Henk van Dijk, his wife and his friends gave me a good start. The living space above the cabinet was painted for me over New Years weekend and furnished with some furniture. That’s what you call a good start, but I’m very grateful for it,” she laughs.
Three and a half months later, she got used to it. “It was a bit overwhelming at first. There are many vets in the clinic in Lienden, so whenever I had a question I left the consultation room and consulted a colleague. But it’s also fun to really dig, search and find solutions yourself. With the assistant Jolande and the para-vet Roos, things are going well now. ” Fien experiences lambing (helping with the lambing of the sheep) as a special reminder in Zeeland.” Henk has already done this and I also received a phone call in my service. During my studies I went on an internship in England in particular to learn it. It’s a lot of fun to do, it gives me a lot of energy when things are going well, they’re healthy. Even at night, it really gives me a boost to be able to help with that.
During the weekends off, Fien always likes to go to the “house-house”, his parental home in Erpe-Mere, “but I now do sports in Goes and I find it very pleasant here.