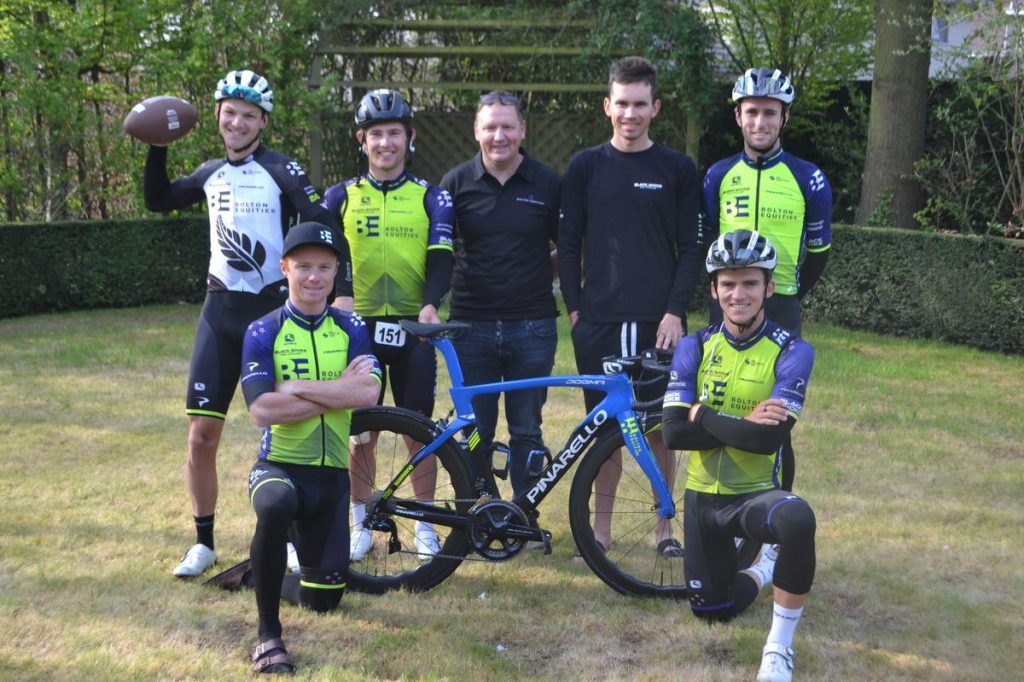 Since last week a number of New Zealand continental Bolton Equities Black Spoke Pro Cycling riders have been staying in the south of our province. Former professional cyclist Franky Van Haesebroucke, once also the mainstay of crossers Jonathan Page and Kata Blanka Vas, is taking care of the Kiwis, but he is worried because his team is allowed to start in a few Belgian competitions. “Our boys can ride the bike really fast, they just have to be given the chance to show it.”

Flashback to November 1995. Franky Van Haesebroucke, 24, from Avelgem, travels with compatriots to New Zealand for the country’s national tour, also known as the Tour of Southland. Nine outings are scheduled, often in difficult and windy conditions. The Belgian team is smart about it. In the countless open plains, Van Haesebroucke and company pull the peloton in echelons every day, a phenomenon that New Zealanders do not know. The homeland has no chance. The Belgians won no less than six stages. Six times the quick-witted Van Haesebroucke wins. In Oceania, his name has become permanent. In the rest of his career he will often make the crossing.

In New Zealand young people go to the beach to sit at the bar, here in Belgium everything revolves around the course

Some 27 years later, Van Haesebroucke is the sporting director of a New Zealand continental cycling team, Bolton Equities Black Spoke Pro Cycling. Not a coincidence, or what did you think? “During my time as a rider in New Zealand and Australia, I met Scott Guyton, then a promising young rider who was preparing for the Olympics. I told him that he could always count on me if he ever came to race in Europe. He did too, as did his wife Vanessa, who played for Vlaanderen-T-Interim for a while. After their career, Scott and Vanessa opened their own bike shop in New Zealand. There he meets Murray Bolton, an avid cyclist and also the wealthy manager of Bolton Equities, a company that invests in other companies. And look, it’s 2022 and Bolton are the main sponsor of the team of which Scott Guyton is the manager and I am the sporting director. Sometimes the world of cycling is very small.

It’s a sunny Tuesday morning that we visit Van Haesebroucke and six of his New Zealand pilots at their brand new base in Avelgem. The other riders will stay at another team house in Girona, Spain. Last week the runners raced in France and the Netherlands. The Tour of Greece awaits next week. The first races in Belgium will be the Ruddervoorde trade show on May 17 and the Antwerp Port Classic on May 22. The team did not acquire the starting right for the Tour of Belgium, among others. Van Haesebroucke finds this very unfortunate. “The arrival of a new continental team like Minerva has only made it even more difficult for us, as the Belgian organizers always prefer teams from their own country. In France, we face the same problem. I have trouble with that. We have a lot of quality at home. At the Tokyo Games, the New Zealand quartet was only narrowly beaten by Filippo Ganna’s Italy in the semi-final of the team pursuit. Well, three out of four New Zealanders have ridden for my team. There are guys here in Avelgem who can do a faster chase on their own than the Belgian quartet together. Recently two of my riders became New Zealand champions. And one of them, James Fouché, also became Oceania continental champion last week. It’s as if Sonny Colbrelli was European champion. Isn’t it an added value for the organizers to have such runners at the start of their race? A week ago, our team was even 21st in the UCI ranking. Even WorldTour teams like Astana and EF Education have fewer points than us. That means something, right?”

One of the riders currently staying in Avelgem is James Fouché, 24, brand new champion of his country and his continent. He has ridden for the teams of Bradley Wiggins and Axel Merckx in the past. The Belgian roads no longer have many secrets for him. “You have to come to Europe to become a cyclist,” says Fouché. “In New Zealand, young people go to the beach to sit at the bar. Here in Belgium everything revolves around the course. The atmosphere during a match here is incomparable. A fantastic experience.

It’s a feeling also confirmed by his teammate Mitchel Fitzsimons, who is the youngest of the peloton at 19 years old. Van Haesebroucke calls him the future sprinter. “He just needs to grow a little more. These men are not used to fighting for their place in New Zealand. Mitchel experienced this last weekend at the Arno Wallaard Memorial in the Netherlands. He crashed and his run was immediately over. Fitzsimons, who spent several months as a junior in foster care in Heestert last year (with Joost Debrouwere, ed.) stayed, nods. “In New Zealand, 70 runners participate in a race and 20 can win the race. Here, there are 140 pilots at the start and more than 100 are capable of winning. That’s the big difference. It was my trainer, former professional cyclist Hayden Roulston, who introduced me to the Belgians. In New Zealand, I grew up in an area where the nearest village was 200 kilometers away. (smiles) Here you have only houses and hardly any countryside. You have to get used to it. Just like the games here. It’s amazing how many runners can run in such a short space. It’s just crazy†

Bolton Equities Black Spoke Pro Cycling is an ambitious team. Van Haesebroucke only wonders what the future will look like. Will the team stay in the Continental Division – say the Third Division – or will they step forward in 2023? “If we became a pro-continental team, we would in any case acquire more starting rights in more important competitions. I am certainly in favor of it, because at the moment we still too often have to settle for crumbs. And if we are allowed to take the start of a first category UCI race, it is a very important meeting. The Tour of Hellas, which starts next Wednesday, is one such race. We have to be there.

Van Haesebroucke absolutely wanted to add the five Greek days to the program, but logistically it promises to be ten hellish days. Not for the runners – they fly – but for the staff. “Friday (today, ed.) Carer Sam Maertens and I are going by car and van to Ancona in Italy for a 1,400 km journey. Then a 23-hour boat trip to Patras awaits us, from where we have to travel 200 km to Athens. This is followed by another nine-hour boat trip to Crete, where the first trip will take place on Wednesday. Then we have to get back on the boat to Athens for the remaining four legs, after which the same procedure is repeated until we return to Belgium. There are many people who tell me that they also want to become a team leader. Yes, sitting in the car is fun. But often they don’t realize what this entails. I’m not complaining though. I have carte blanche with this team. I was asked twice by a pro-continental team, but I prefer to work with the outsider. I like to accept that I constantly have to solve problems. I am normally a postman by trade, but I took unpaid leave. Otherwise it is not feasible. it is A story without end†

Finally, we ask Fouché, the pillar of the team, what are his ambitions. “Become a professional cyclist,” he smiles. “What is my dream course? The Southland Tour, of course. I want to win six stages there. (smiles) Just like Franky. Van Haesebroucke loves his foal joke. “James likes grueling prices. Tracks like Oude Kwaremont and Paterberg are his thing. Just keep an eye on him and the other boys. They can ride the bike really fast, they just have to get the chance to show it here.