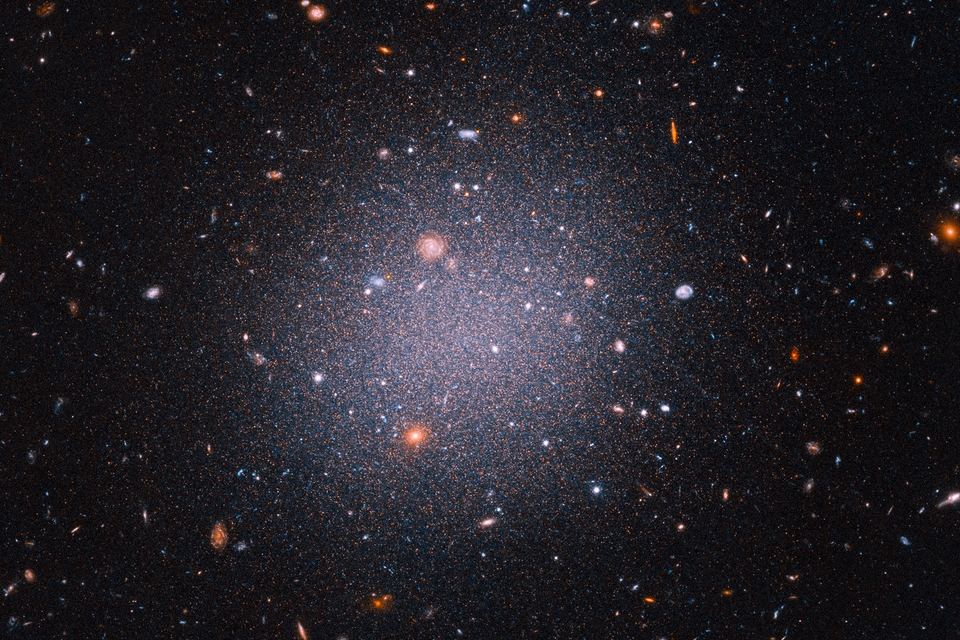 But scientists still cannot explain the existence of galaxies.

black matter
Dark matter is unproven matter that we cannot see. That this matter exists is therefore deduced from what we can see. Very concretely, it is a question of looking at rapidly rotating galaxies and clusters of galaxies. These spin so fast that – judging by the material you can see – you would expect them to fly away. But that does not happen. And that would be due to the invisible matter that holds things together – giving extra mass to the galaxy.

The fact that NGC 1052-DF2 does not appear to harbor dark matter has really ruined everything we thought we knew about galaxies and their formation. No wonder the results were immediately called into question. In particular, the claim that the galaxy was 64 million light years away has been called into question. And a year later even appeared investigation who concluded that the galaxy was much closer than previously thought and has yet to be largely dark matter.

Unusual results
But new distance measurements from the Hubble Space Telescope – the most accurate ever – now show that NGC1052-DF2 is even slightly further away than previously thought. And it reinforces the idea that the galaxy contains virtually no dark matter. “I think it makes sense for people to question our results (from 2018, ed.), Because they were so unusual,” says researcher Pieter van Dokkum. “It would be nice if there was a simple explanation for this, such as a bad distance measurement.” But that doesn’t seem to be the case. And Van Dokkum does it well. “I think it’s a lot more fun and interesting if it’s actually a strange galaxy.

Distance and dark matter
Why does the distance between us and NGC 1052-DF2 determine whether or not the galaxy harbors dark matter? It has everything to do with the mass of galaxies. As mentioned, galaxies are normally made up of visible matter (think stars) and invisible matter (dark matter). The total mass of the galaxy can be calculated by studying the motions of stars; their speeds are in fact influenced by gravity (which in turn results from the total mass of the galaxy). To calculate the mass of visible matter only, you need to determine the absolute brightness of the galaxy. Because the brighter a galaxy, the more stars there are in that galaxy and the larger the stellar mass. But to determine the absolute brightness, you need to know how far away the galaxy is from us. Because the further a galaxy is from us, the less luminous it appears. Let’s go back to NGC 1052-DF2 for a moment. In 2018, it was declared to be around 64 million light years away from us. The galaxy looks quite small from Earth, but much of this can be attributed to the great distance between us and the galaxy. If you could see the galaxy up close, it would be quite bright, so it would have many stars and a large stellar mass. So large, in fact, that the stellar mass is almost equal to the total mass of the galaxy, so there is hardly any dark matter to be found. In 2019, researchers said the galaxy was much closer to Earth. In this scenario, therefore, the weak galaxy would not be so bright and heavy. The result is a smaller stellar mass. The total mass, meanwhile, remains the same. And so a greater proportion of the total mass would be represented by dark matter.

But now the researchers have reexamined the distance between us and NGC 1052-DF2. They studied the red giants at the far reaches of the galaxy with the Hubble Space Telescope. They then used the brightness of these stars to calculate their distance. “Studying the brightest red giants is a common way to calculate the distance to nearby galaxies,” said researcher Zili Shen. And judging by the red giants, NGC 1052-DF2 is 72 million light years away. This roughly matches the 2018 results and supports the conclusion that the total mass of the galaxy is almost entirely attributable to visible matter.

The whole iceberg
“For almost all the galaxies we look at, we can’t see most of the mass because it’s dark matter,” Van Dokkum explains. “But in this case, it’s: what you see is what you get. The Hubble Space Telescope really shows us everything. That’s it. This is not the tip of the iceberg. That’s all the iceberg.

Mystery
We do not know how this galaxy was formed in the almost total absence of dark matter. “There is a saying that exceptional claims require exceptional evidence, and the new distance measurements support our previous conclusion that DF2 lacks dark matter,” Shen said. “Now we need to put the discussion behind us and focus on how these galaxies formed.”

Other galaxies
Because it is becoming increasingly clear that NGC 1052-DF2 is not alone. For example, in 2018, researchers were already claiming that the galaxy NGC 1052-DF4 also appears to contain virtually no dark matter. And last year, an independent research group discovered 19 other dwarf galaxies that also appear to be poor in dark matter.

And the search for galaxies without dark matter continues. Because the researchers would like to clarify just how “normal” these still strange ducks are. And what other unique properties they may have. This can give better insight into their origin. And finally, by comparing these galaxies poor in dark matter with galaxies rich in dark matter, the researchers also hope to better understand what this still mysterious dark matter is.

Hubble
The Hubble data on which this study is based was collected some time ago. Hubble is not active at the moment; the space telescope has been struggling with computer problems since Sunday. NASA is working hard to fix it.