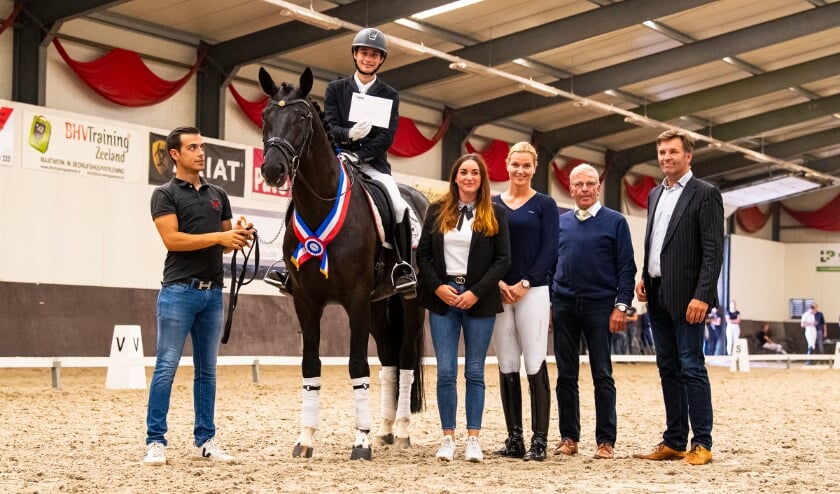 The mare Karava, bred by the late Cees van Etten (by Lord Leatherdale and elite Verava pref IBOP- (dres) and Sport- (dres) by Negro x Monaco), ridden by Amber Hage, surprised the six-year-old jury. The mare received no less than 87 points, including nine at the walk, trot and talent. Karava is a very friendly mare who moves very lightly. She has a lot of cadence and moves with an expressive front leg. Guest rider Emma van den Hooven overtook the top three horses in each category. “This mare was feeling so good that I could only give her a 10”, she confides afterwards. With this, Karava not only finished in first place among the six-year-olds, but it also proved to be more than enough to win the overall title of “Best Mare”.

The jury awarded the best marks of this edition of the Duvals Cup to the son of Glock, Toto Jr, Hexagons Gorgeous Black Art (sm. Rubiquil, bred by K. Visser from Alteveer). He was very kindly presented by Benedek Pachl. The beautiful black stallion is approved by the NRPS and competed in the category of approved stallions. He scored a total of 93 points, including a 10 for the trot, a 9.5 for talent and a nine for walk, canter and harmony. Gorgeous Black Art is a horse with extreme charisma and a lot of quality in his technique of movement. He has a lot of balance and carrying capacity on the move, especially at the trot, the chief jury said in the explanation. Benedek himself is also very satisfied with the horse entrusted to him by Stal Hexagon. “I think he’s a great horse for the future. He has so much talent to collect and still wants to work for you. He’s just awesome! He gives you a really good feeling under the saddle, I think he can become one of the best Grand Prix horses. Owner Leunus van Lieren responds from Aachen: “Black Art is a special horse that seems to have no limits, a true athlete by nature with a great attitude.”

The day started off well with a group of top quality six year old dressage horses. The first three were close to each other, two horses received 87 points from the jury, one horse received 86 points. The ranking was to be determined by guest rider Emma van den Hooven. As mentioned, Lord Leatherdale’s daughter Karava won the class with a 10 for crushing. Duvals Kapri Son (by Duvals Capri Sonne) received a 9.5.
Third place was taken by Kobalt Spring (by Giovanni x STB-EXT PROK by Charmeur, bred by EH Schoonhoven, Schoonrewoerd) who received a 9 from the guest rider. Kim Alting introduced the chestnut gelding in a professional and very friendly manner.

Ten horses received 80 or more points in the six and five year olds. Numbers one through three all received 84 points for the operation. So again, it was up to Emma van den Hooven to determine what the ranking would look like.
It was the son of Jazz Las Vegas (by Sandro Hit) who most convinced the guest rider. Emma could give a 9.5 for running towards the talented gelding. According to the jury, Las Vegas is a horse that has developed a lot of flexibility and space in movement. He has a very good walk and a trot characterized by a lot of expression in the front. Amazon and its owner Sanne van der Giessen bought Las Vegas a year ago. She works at Lynne Maas and there the gelding was in training for sale. “Las Vegas wasn’t very visible at first, but it developed so well in three months that my dad decided to buy it from me. I didn’t expect it to be this good. Of course, I had hoped so. Las Vegas has no negative points and has three very good gaits, but above all its character is incredibly good. He is never tired and continues. I especially want to enjoy and with him as much as possible and participate in as many fun matches as possible. He’s just a really good horse, and on top of that he is also very sweet and funny. I truly appreciate it !”

In second place, the elite EPTM- (dress) mare Luna (by Governor) which was presented by Jessica Nijpjes. The mare’s record is already excellent at her young age. At three, she ran an EPTM of 82.5 points and became Reserve Champion at Zeeland Central Inspection and was delegated to the NMK. She competed in the semi-finals of the PAVO Cup and won bronze at the Hippiade in M1. Two embryos have already been rinsed from Racoon (by Kjento) and Jameson RS2. Lover Boy (by Tiësto) finished in third place with Jenneke Overduin in the saddle. He received 84 points, including a 9 for harmony and was rewarded by the guest pilot with an 8.5.

The jury had nothing but superlatives for Dreamboy Mercurius ACM’s son. He received 90 points in total for the performance and the final 10 for the crush. He obtained a 9.5 trotting, an 8.5 walking and a 9. Johan Hamminga: “Mercury is a horse that moves very hard and is remarkable for his carriage and his balance. This trot! You can set the clock on that, if pure in the stroke. It is a horse with an abnormal quantity of quality. Mercurius ACM already won the four-year-old class last year, finished 7e in the PAVO Cup final, won the Subli Cup in Werkendam and also became L2 Hippiade champion. Amber Hage once again introduced Mercury professionally, as we are used to now. “He’s really a dream horse, it’s a daily pleasure with him. In the test, he always gives a little extra. I will try to ride as high as possible with him in the sport! “And that little extra, we all saw at the awards ceremony. What a horse!

The second place was taken by Racoon (by Hero). In total, he got 86 points and a 9.5 for crashing. Amazon Franka Loos presented Racoon very well. “He is with us today for the first time. He was super nice and stayed focused on me. You feel very comfortable in the saddle. I think he’s a very talented horse with the right attitude. Milan (by Dreamboy) was bought by Dick Hoefnagel at the foal auction in Asten. At three years old, he has just started training with Maxime Osse from Max Equine. He received 83 points for his performance and a 9 for the crash. Maxime: “I think Milan is really a horse for top work. He has a lot of charisma! He’s very bloody and has a lot of lead and I like that. We have high hopes for him for the future.