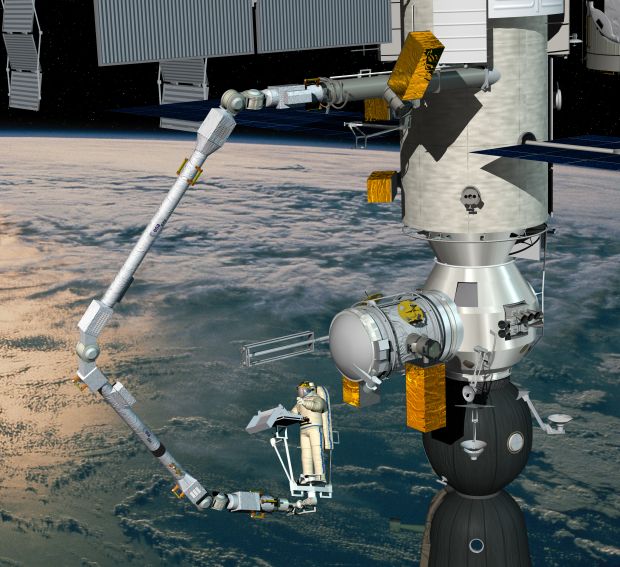 It was already completed in 2005, but it is only this month that the European robotic arm ERA will finally make its way to the International Space Station (ISS). There it is used on the Russian part of the ISS for inspection, handling of large objects and the movement of astronauts during spacewalks.

Philippe Schoonejans of the European Space Agency (ESA) was “disappointed” when he learned on July 1 that the Russian launch of the European robotic arm (ERA) was again to be postponed. At the ESA ESTEC Technology Center in Noordwijk, a press meeting had already been scheduled at which Mona Keijzer (State Secretary for Economy and Climate) and astronaut André Kuipers would be present, but now everything seemed suddenly in limbo. And this because of a reckless blunder of the Russians, as a result of which some sensors were not provided with the necessary thermal insulation. Fortunately, it soon became apparent that there was only a six day delay; ERA will now launch on July 21.

Project leader Schoonejans has been working on the robotic arm for 35 years – since 1986, when the device was designed for use on board the European space shuttle Hermes. The Hermes project was scrapped, but a new definitive destination was eventually found for ERA: the Nauka module (Russian for “science”), which was to be docked to the International Space Station in 2007. (Confusingly, ESA calls the module the MLM – the multipurpose lab module.) However, a seemingly endless series of technical setbacks has repeatedly delayed the launch of Nauka – and therefore ERA. “Always for a maximum of one year,” says Schoonejans, “so that there was never the possibility of making any changes to the design”.

This design is somewhat reminiscent of an elbow joint with two forearms attached, both ending in a sort of “grabbing hand.” By using these two “hands” (the end effectors in ESA parlance) allows the device to move outside the module, from one point of engagement to another. Although Nauka only has three basis points a, the reach of the ERA is therefore much wider than with a fixed arm. According to robotics technician Lodewijk Aris, it can also reach the Russian storage module Rassvet (“first light”) and the very first ISS Zarya module (“dawn”). 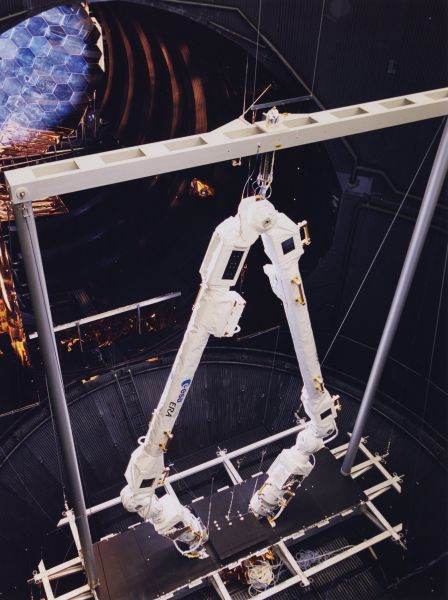 ERA is tested at ESTEC in the Large Space Simulator. (ESA)

This is the first time that an advanced robotic arm will be available on the Russian part of the space station, according to André Kuipers, who has been on board for more than six months since the end of 2011. The American part of the ISS was already equipped. the big and heavy Canadarm2 in 2001. Seven years later, the smaller but very flexible Dextre manipulator (also made in Canada) was added. Since 2008, the Japanese JEM module also has its own Remote manipulator system, but so far only two extendable and manually operated crane arms could be used on the Russian side. According to Kuipers, ERA is “a really wonderful device that will take a lot of work out of astronauts.”

With a total length of 11.3 m, the ERA is smaller than the 17 m long Canadarm2, but it is much more precise: despite its mass of 630 kg and its displacement speed of 10 cm / s, the tip of the arm can be lowered to 5mm be positioned precisely. With the help of cameras, lasers and sensors, this precision can be considerably increased, which is necessary, for example, for a perfect grip on one of the basis points. ERA has an average power consumption of 475W and can handle objects up to 8 tonnes – everything in space is weightless, but inertial forces still create a huge load, according to Aris. The arms are made of carbon fiber and aluminum; the gaskets are made of all kinds of different materials.

Of end effectors are attached to both ends of the robot arm by means of three joints. Just as you can rotate your flat hand with your outstretched arm, tilt it up and down, or move side to side, ERA’s two “hands” can also rotate on the x, y axes. and z. With the hinge in the elbow, the device thus has seven joints – more than enough for the six degrees of freedom needed to achieve any combination of spatial position and movement. To avoid accidents, the robot arm is equipped with a collision avoidancesystem, which monitors every movement against a detailed 3D model of the ISS. “A collision is literally life threatening,” says Sytze Kampen, project manager at Airbus Defense and Space Netherlands (formerly Dutch Space), where ERA was built, together with contractors from eight European countries.

The European arm is more autonomous than the Canadian arm because it is fully programmable. In addition, it can of course also be controlled manually, both from a laptop in the ISS and using a control panel that astronauts can use on spacewalks. According to Kampen, the development of this robust control panel (with texts in English and Russian, and with toggle switches and somewhat archaic signal lamps) was still a lot of work, according to Kampen: it had to be capable. to withstand the extreme temperatures in space, and to be able to be operated without fail by astronauts in bulky space suits and thick gloves.

All the technology on board ERA is now around 20 years old; According to Schoonejans, it’s not often that space hardware has been grounded for as long as in the case of the European robotic arm and the Russian Nauka module. “In the future, we want to replace the current black and white cameras with more modern cameras if possible. full colorhigher-resolution copies, ”he says,“ and the laptop’s controls might need an upgrade as well, with cutting-edge graphics. Such improvements have never been possible over the past sixteen years, as the launch date was still approaching. “We had to be ready all this time to be able to leave quickly,” said Schoonejans.

ERA was shipped from Leiden to Russia in spring 2020; on May 20 of this year, it was attached in a folded state to the Nauka module at the Baikonur launch site. After having also removed the last obstacles, it will be launched on Wednesday July 21 with a Proton rocket. Docking to the ISS will take place about a week later, and astronauts will unpack, set up and thoroughly test the robotic arm during a series of spacewalks. It should be fully operational within a few months. His first tasks are to place large heavy radiators outside of Nauka (for the temperature control of the module) and the installation of an extendable table in an airlock, to transport the scientific instruments outside the space station.

In addition to handling heavy and bulky objects, ERA is also used for necessary inspection work, which would otherwise have to be performed by astronauts. “Spacewalks are extremely time consuming, expensive and also dangerous,” says Kuipers. “The more it can be automated, the better. In addition, the spacewalks that are still needed will be much more efficient, according to Kuipers, if the astronauts can move quickly from one point to another using the robot’s arm.

ERA, priced at 360 million euros, is designed for a lifespan of at least ten years. Project manager Schoonejans expects the ISS to be still “up and running” by then, possibly on the basis of commercial operation. Later this decade, the Lunar Gateway is also expected to take shape – a small space station orbiting the moon as part of NASA’s Artemis program. ESA is also helping, but not with a robotic arm, according to Schoonejans – this order will go to Canada again. A second CRE is therefore not possible for the moment.

Mona Keijzer (jokingly referred to as “Secretary of State for Space” by Jasper Wamsteker of the Dutch Space Office) once said at the press conference on July 5: Space travel is people’s work , trial and error, and above all a matter of patience. Until Schoonejans actually sees the Proton rocket depart next week (“Yes, sure, I’ll be at launch, whenever it takes place”), he’ll keep the crossed fingers. “But it’s like an insane relief that the launch is finally happening.” 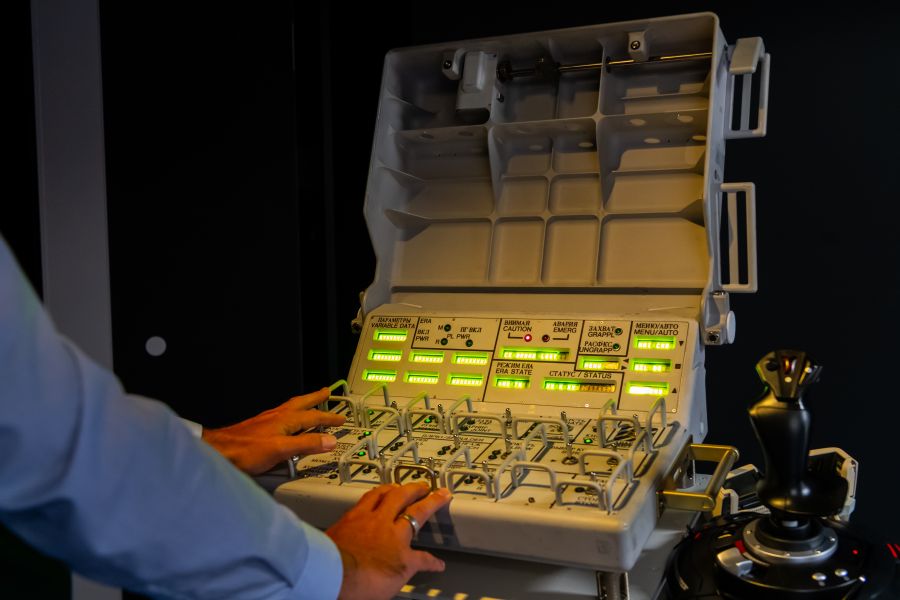