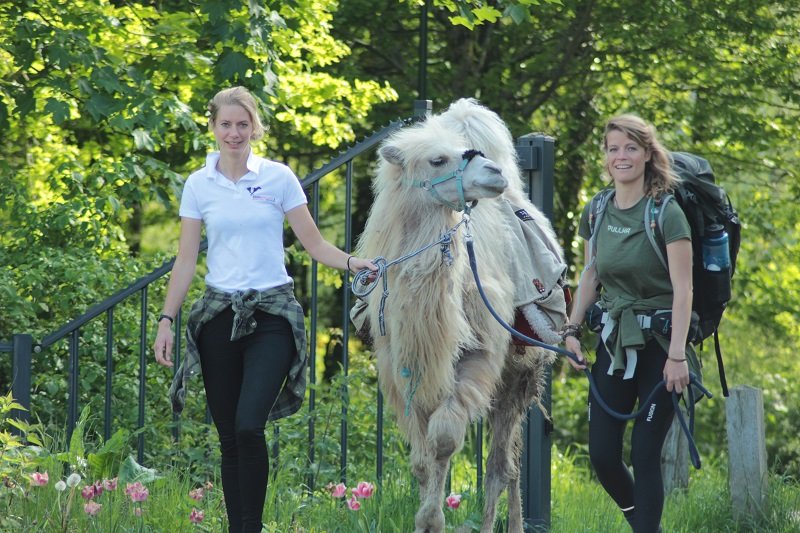 Animal Ambulance The Hague had a very special guest: Einstein, a one year old male camel. Fortunately, all is well with Einstein, he arrived at the animal hospital in perfect health. Camel Einstein was walking with his owner Tamar Valkenier and Ninouk Vermeer, director of Veterinary Hospital and Ambulance Service The Hague Foundation

Tamar Valkenier (34) is a professional adventurer. 365 days a year, it can be found in rugged natural areas around the world. She travels by bike, on foot, on horseback or on the back of reindeer or camel the most remote regions of the world. She is currently traveling through the Netherlands with her camel Einstein to publish her book ‘Full time adventurerpromote.

In total, Tamar has cycled 12,000 kilometers in recent years. She learned to hunt with eagles in Mongolia by traveling there with her horse, camel and dog. She crossed Jordan with her donkey, crossed the Himalayas, skated nearly 1,000 kilometers in Lapland and traveled for three months with Achterhoek Miriam Lancewood in the most remote region of New Zealand, without food. There she received a visit from Floortje Dessing.

Read more under the image

Well, what’s on your bucket list then? Spend the night in Dierenhospitaal The Hague, of course! Tamar: “I love animals. During many of my trips, animals accompanied me, facilitated travel and protected me. The connection between humans and animals intrigues me, and what could be more fun than sleeping in such a special place on a trip through the Netherlands. A mink lives in front of my room and next to it is the reptile and amphibian room.

Does she sleep well? “Well, if you’ve had wolves next to your tent, reptiles in a room next to you aren’t a problem. What’s more, the most important thing is that Einstein spent the night comfortably and safely.

Read more under the image

Tamar continues, “The animal hospital is home to pets and farm animals, but the ambulances are mostly out for wildlife,” manager Ninouk and the volunteers told me. Birds, hedgehogs, foxes, regularly a deer or a seal. Yes, even in one of the most densely populated parts of the world nature is clearly present which is cool.