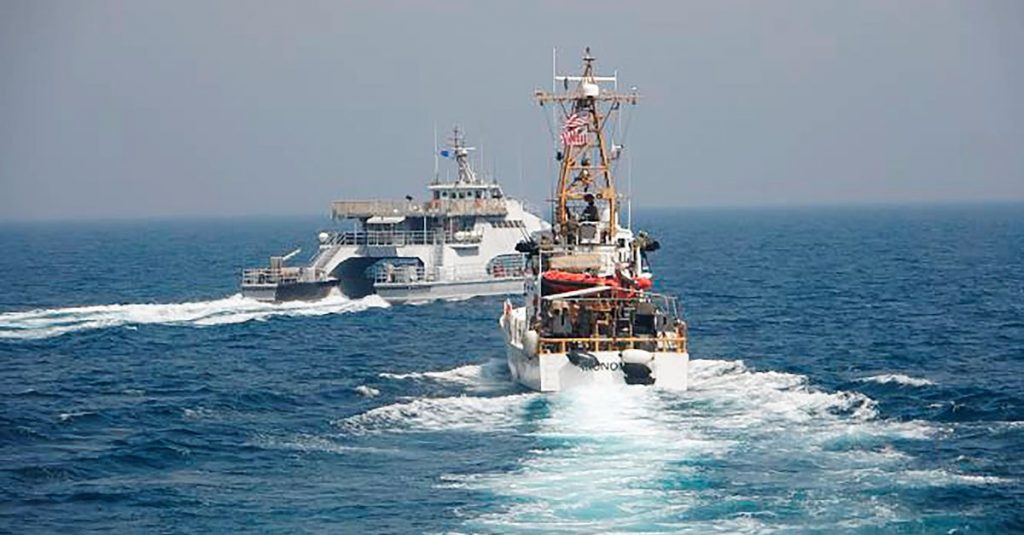 Three Iranian Navy ships sailed close to the US patrol vessel in the northern Gulf last Monday evening. USS Firebolt and the coast guard ship USCGC Baranoff, that the Firebolt fired a number of warning shots. Then the Revolutionary Guard boats, which at one point were only 70 meters from the Americans, fled. According to the Americans, this was the second time this month that such a confrontation with Iranian ships had taken place.

As of the beginning of this month, negotiations have been underway to restore the international nuclear deal with Iran.

The last time Iran and the United States almost clashed in Gulf waters was in July 2017. At the time, President Trump had just taken office, very irreconcilable vis-à-vis from Iran. At present, such hostilities seem less likely. Trump’s successor Biden has always said he wants to reinstate the 2015 international nuclear deal with Iran, which Trump unilaterally withdrew in 2018. As of the start of this month, that has actually been negotiated. in Vienna. After Trump’s termination, Iran dramatically increased uranium enrichment in violation of the treaty.

However, the possible resumption of the original deal, in which Iran pledged to limit its nuclear activities in exchange for the lifting of economic sanctions, is already making many in the region nervous from the start. Israel, for example. In an operation widely attributed to the Israeli Mossad, part of Iran’s Natanz nuclear complex was destroyed two weeks ago.


But the Gulf states have also always been wary of such a deal with Iran. It is not without reason that Biden is sending a delegation to Saudi Arabia and the United Arab Emirates, among others, this week to discuss this sensitive topic and other security issues such as the possible delivery of F-35 fighters. Americans in the Emirates.

At the same time, Gulf Arabs are realizing that the wind is blowing from a different angle under Biden and under Trump and that they will have to adapt accordingly. Thus, Saudi Crown Prince Mohammed bin Salman, the country’s de facto ruler, said this week in a long TV interview that he wants the best for Iran. “Iran is a neighbor and all we want is a good and special relationship with Iran,” MbS said. Of course, there are still issues with what he called Iran’s “negative behavior”, but as far as he’s concerned, it’s something that can be discussed.

The latter is already happening, directly even. Thanks to the mediation of Iraqi Prime Minister Mustafa al-Khadimi, according to several reports earlier this month in Baghdad For the first time in years, talks have taken place between Iranian and Saudi officials. Such deliberation between the two main rivals would have been unthinkable under Trump.

In Iran, too, not everyone is convinced of the need for a renewed nuclear deal with the United States and other great powers. Especially within the powerful Revolutionary Guard, many have always opposed this. This was also evident from sound recordings leaked this week. Iranian Foreign Minister Javad Zarif, himself one of the architects of the nuclear deal. In it, Zarif complained that the Guard had often actively opposed the deal, including testing a missile with the words “ Israel must be wiped from the face of the earth ” in Hebrew and capturing ten American soldiers in early 2016.

With that in mind, recent rather provocative maneuvers by Iranian navy boats in the Gulf are probably no coincidence. Zarif and his diplomats in Vienna are generally of little concern to the Revolutionary Guards, as Zarif notes in the leaked tapes. The Guard is accountable only to Iran’s Supreme Leader Ayatollah Ali Khamenei.

But so far, there is no indication that Khamenei, who has the final say on all important issues, would be against a new deal with the Americans. Despite the damage to Natanz, he allowed the next round of negotiations in Vienna to continue.

Not yet at the same table

The Viennese deliberations are going fairly well, according to Iran in particular. Iranian President Rouhani, also a supporter of the agreement, estimated last week even that the negotiators were already 60 to 70 percent ready. But the two sides are not yet seated together at the table. The Iranians stay with European intermediaries at the Grand Hotel, while the American delegation camps at the Imperial Hotel across the Ringstrasse. And there are certainly still the necessary obstacles to overcome. More than 1,500 sanctions were imposed on Iran during the Trump era, some as part of the fight against terrorism. Not all of them can be erased at once. This requires Biden and his government to do the necessary massages at home, especially in Congress.

A version of this article was also published in NRC Handelsblad on April 30, 2021