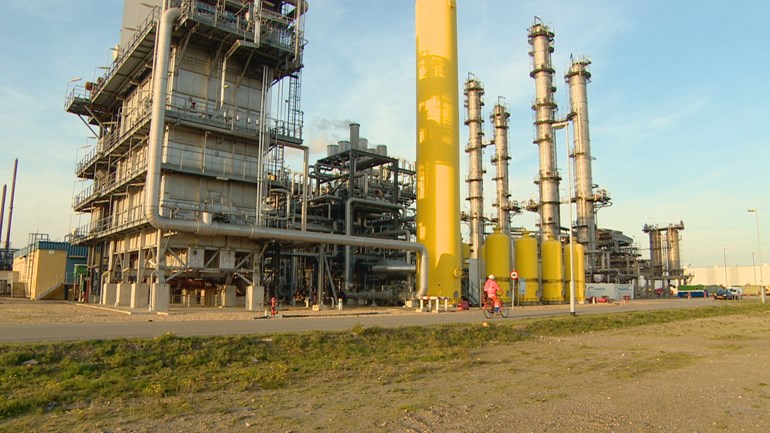 Why is the use of hydrogen respectful of the environment?

The best known way to produce hydrogen is the electrolysis of water (H2O). Using electricity, water (H2O) is divided into gaseous hydrogen (H2) and oxygen (O2). Oxygen can thus be released into the air and the hydrogen can be used as fuel in factories. When you burn hydrogen gas, heat and water are created. Of course, electrolysis costs energy, but no polluting emissions are produced.

Which companies need a lot of hydrogen?

A few companies that use a lot of hydrogen are Zeeland Refinery in Vlissingen, Dow Chemical in Terneuzen, the Yara fertilizer plant in Sluiskil and the Belgian branch of steel giant ArcelorMittal in Ghent. These are all companies that are in the top 10 companies that use huge amounts of energy and emit the most CO2. Yara, for example, consumes as much natural gas as 1.3 million homes.

It must be green hydrogen. What’s this?

It is hydrogen that is produced in a sustainable way. For example, using wind power. Ørsted wants to build a new offshore wind farm there. In the coming years, the government will designate more areas where offshore wind farms will be installed. It is not yet known whether new wind farms will be added off the coast of Zealand, but according to Ørsted, there is little room there.

Who is going to pay for this factory?

Ørsted says he will be able to pay for the offshore wind farm without government subsidy. The hydrogen plant and the construction of the hydrogen network require government support. Companies in Zeeland and ArcelorMittal in Ghent also want to benefit from hydrogen. To do this, a network must be created. And it costs money.

Are we as Zeeland going to notice anything about the new factory?

It must be built in Zeeland, somewhere in the port area. Where exactly is not yet known. The former Thermphos site in Vlissingen-Est is one of the options. In addition, the new plant will provide direct and indirect jobs. People go to work in the factory, but suppliers and subcontractors can also benefit. It is not yet known how many jobs this would involve.