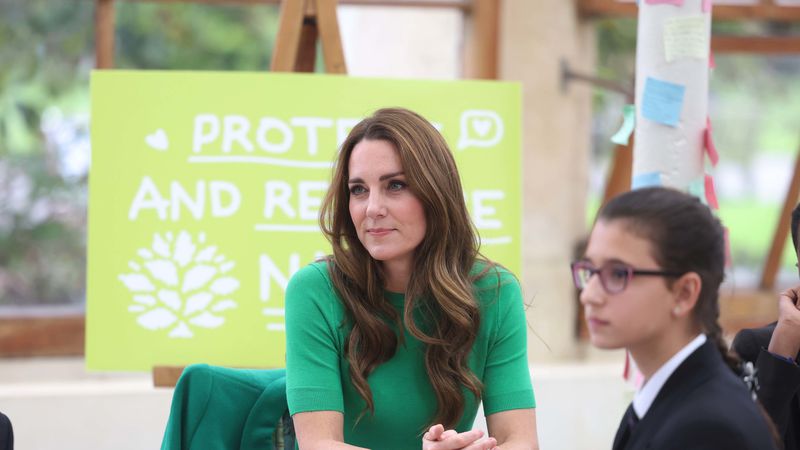 We are already getting a little into the Christmas spirit, all the dark green we saw this week at the Duchess of Cambridge and the Countess of Wessex.

Dark green is one of the colors said to be seeing a lot this fashion season – and Duchess Kate seems to be well aware of this trend. On Wednesday, she and Prince William attended a sustainability event at Kew Gardens, London’s botanical garden. And with such a theme and location, of course you should go for a green outfit.

However, it’s not just the color that gives the outfit a lasting touch. Kate often wears older clothing, but by “old” we mean it was from last season. The Duchess has had this coat (from Erdem) in her wardrobe for a long time. It comes from a 2013 collection and Kate has worn it several times since, most notably during the 2014 tour in Australia and New Zealand.

Less is more! Lately, Máxima has gone for these simple hairstyles.

But the Kermit color coat is certainly versatile! On the left, we see Kate wearing it in 2014, zipped over a green dress. Seven years later, she wears it in a completely different way, with a green and black top flared jeans.

The Duchess of Cambridge is not the only one to adopt the color of Christmas fashion again, Sophie, Countess of Wessex is also a fan. Prince Edward’s wife wore turf green pants that would complement Niece Kate’s outfit. And this on a working visit without a lasting or botanical touch: Sophie motivates children to have their eyes tested here, on the occasion of International Sight Day.

👁️Today is #WorldSightDay. To mark the occasion, the Countess of Wessex, who served as the Global Ambassador for the @ IAPB1 since 2003, visited @PerseidSchool in London to support an initiative encouraging children to get their eyes tested. pic.twitter.com/1jT4JAVkEe

Last Wednesday the Countess also dressed in dark green with a Victoria Beckham suit (£ 1,300) and showed how flattering fashion color can be. We also dive into our closet to have a few more celandine bring out the old green outfits!

As Colonel-in-Chief of the Royal Corps of Army Music, The Countess of Wessex today visited the Royal College of Military Music in Hampshire to open the new Senior Training Wing 💂‍♀️🎺

His Royal Highness hoisted a flag to mark the opening of the new building and met the student conductors 🥁 pic.twitter.com/GT3qzJmIkW