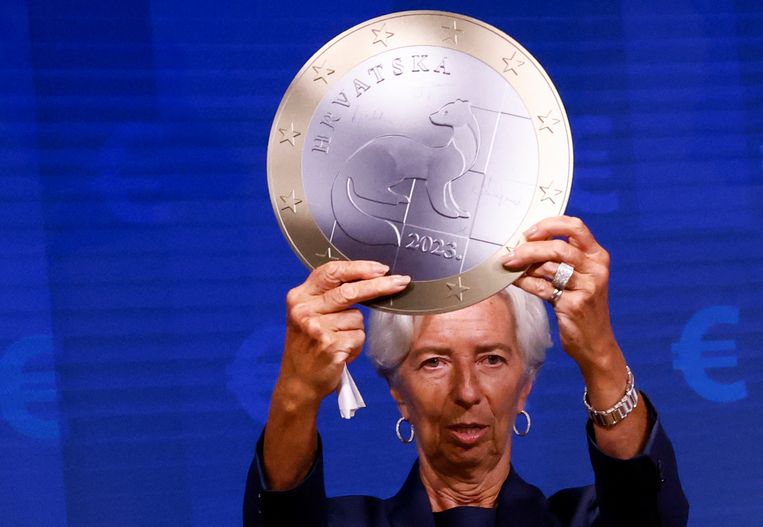 After 101 consecutive interest rate decisions in which the European Central Bank (ECB) did not announce a rate hike, it finally did on Thursday. No one doubts that Christine Lagarde will do what her predecessor Mario Draghi couldn’t: make borrowing money more expensive. How expensive is the big question. Although the ECB president predicted a modest rise in interest rates last month, a stronger increase is now a real possibility. Financial markets estimate the probability of each of the two scenarios to be approximately the same.

The huge uncertainty is significant because the ECB usually tries to keep it as small as possible by issuing ‘policy signals’: Forward guidance In slang. At the press conference after the June meeting in Amsterdam, the message was clear. Lagarde Then said “The policy council plans to raise interest rates by 25 basis points at its July meeting.”

However, financial markets are skeptical that the ECB will actually stick to it. Inflation in the eurozone hit a record high of 8.6 percent in June, so many analysts expect the central bank to intervene more strongly with a 50 basis point interest rate hike. It didn’t come out of the blue, as more ECB executives have deemed it necessary in recent weeks.

So it’s also looking for details on the ‘new tool’ announced by Lagarde last month. This ‘Transmission Protection Mechanism’ will become a selective purchase program of government debt through which the ECB intends to combat excessive interest rate differentials within the Eurozone. That could justify a 50 basis point rate hike, according to MUFG Bank’s Derek Halpenny.

Doubts about the affordability of sovereign debt in southern Europe are a key reason why the ECB is targeting an interest rate hike of only 25 basis points, he says. Pushing harder could get poorer euro countries into trouble because, along with higher interest rates, the interest on their government bonds would also rise. But: ‘If a credible deal is on the table to counter fragmentation in the euro area with this instrument, the ECB will be more aggressive.’

According to ECB staff who spoke to Bloomberg on condition of anonymity, the discussions in the policy council are about the conditions countries must meet if they want to take advantage of the special purchase program. It also raises the question of whether the European Commission and the European Emergency Fund, the ESM, should be involved, barring only the ECB from being implemented.

A pleasant side effect of a big interest rate hike is a strengthening of the euro against the dollar. The single currency fell against the dollar last week, to a 20-year low. Since then, the euro has hovered just above the $1 mark. Since many imports such as goods are settled in dollars, inflation is imported from abroad. It also means that the relatively strong drop in oil prices over the past month has not been fully reflected in the euro.

Either way, the ECB is in a tough spot, whether it chooses to raise interest rates by 25 or 50 basis points. In the first case, it clings to its cherished predictability, damaging its credibility as an inflation fighter. On the other hand, a 50 basis point rate hike undermines predictability, making investors more nervous.

It is little consolation that the ECB is not alone in this problem. In the United States, the US Federal Reserve pledged to raise rates by 50 basis points ahead of its interest rate meeting next week. However, in the past week, more central bank officials have voted for a 75 basis point hike. US inflation rose 9.1 percent in June to its highest level since 1981. A 100 basis point hike next Wednesday. This could widen the interest rate differential with the eurozone after a short-term hold, which could give the euro fresh blows.