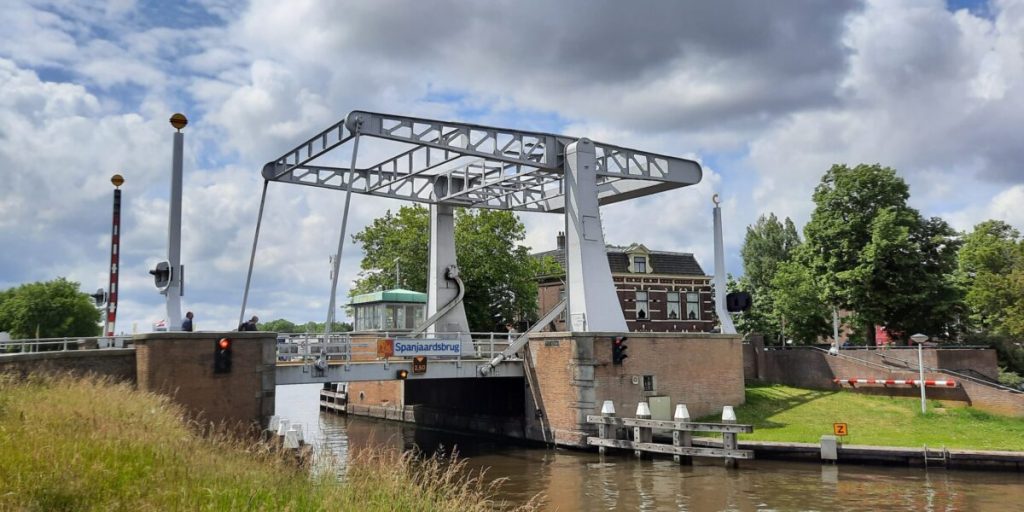 Spanish bridge bike rack. This is the name of the project to make Spanjaardsbrug car-free, in which the municipalities of Leiden and Leiderdorp are working together. In 2025, it should be that time. Then the Leidse Ring Noord will also be ready as an alternative route for cars.

Plans to designate the Spanjaardsbrug exclusively for cyclists, pedestrians and public transport date back a few years, but implementation is now approaching. This parallels the construction of the Leidse Ring Noord, which should offer transit traffic an alternative for driving outside of Leiden and Leiderdorp. According to the Municipality of Leiden, research shows that 80% of car traffic on the Spanjaardsbrug towards Leiden is through traffic. In the direction of Leiderdorp, it is sixty-five percent.

The Spanjaardsbrug connects the Lage Rijndijk in Leiden to the Zijldijk in Leiderdorp. About 10,000 cyclists cross this bridge every day. Many cars and buses also cross the narrow bridge. It is not designed for this and it regularly leads to dangerous traffic situations. Freight traffic to and from De Waard business park also uses the bridge as a shortcut.

Green
Leiden and Leiderdorp and the province of South Holland want to increase road safety for cyclists and pedestrians there. Closing the Spanjaardsbrug to car traffic and redesigning the road between the Lage Rijndijk-Sumatrastraat intersection in Leiden and the Zijldijk-Vlasbaan intersection in Leiderdorp creates more space for cyclists, pedestrians and public transport, as well only space for greenery.

Alderman of Leiden Ashley North believes that closing the Spanjaardsbrug and redesigning the road will not only improve road safety but also the quality of life in the surrounding neighbourhoods. “Because through traffic will no longer be possible, the road on Sumatrastraat will become quieter, making De Waard business park more accessible.”

Chris de Waard spoke to Alderman Ashley North about the closure of the Spanish Bridge to car traffic. Additionally, Maurice Hettfleisch spoke to Leiderdorp Alderman Bob Vastenhoud about what the closure means for Leiderdorp.

Zijldijk
Due to the closure of the Spanjaardsbrug, the Zijldijk in Leiderdorp will lose its function for car traffic from the Baanderij to the Spanjaardsbrug. The Zijldijk will therefore become northbound one-way traffic, in line with the current one-way traffic on the Van der Valk Boumanweg. This is the start of major changes in the traffic situation on the Zijldijk and around the Baanderij, says Leiderdorp Alderman Bob Vastenhoud. The long-term plan for the redevelopment of the Baanderij is that the transit route from the Spanjaardsbrug to the Rietschans no longer runs entirely along the Zijl, but follows a right-hand bend at the car wash and finds its way over the current Baanderij to the Rietschans. “From the point of the car wash to the connection with the Rietschans, the Zijldijk will become a pedestrian promenade and a cycle path.” Alderman Vastenhoud points out that these are still preliminary draft plans that have not yet been finalized.

Participation
In view of the framework decision, which should be submitted to the city council next year, work will be carried out in the coming period on the development of specifications and the development of a preliminary project . To this end, the municipality will engage in discussions with residents and entrepreneurs near the bridge and the participation platform doemee.leiden.nl will be used.

Performance
The Spanjaardsbrug for car traffic will only be closed after the completion of the Engelendaal subproject of the Leidse Ring Noord. This is planned for the end of 2024. After that, work to close the Spanjaardsbrug will start as soon as possible.