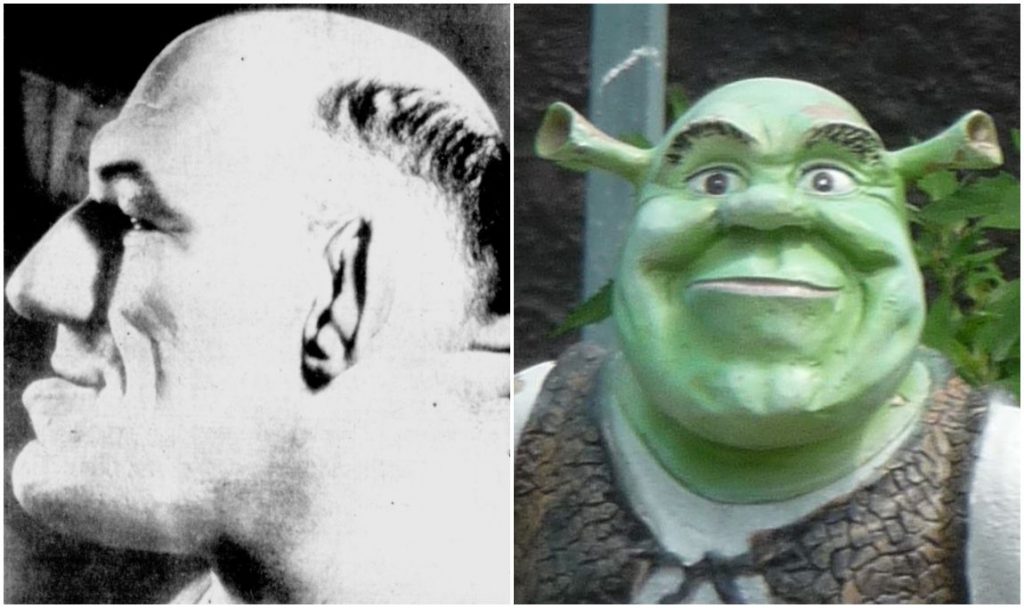 HThe pretty ugly green-colored monster Shrek, the main character in the 2001 DreamWorks animated film of the same name, is well known. The green but friendly monster Shrek is a so called oger, a human-like creature from folklore that often appears in fairy tales. Rumor has it, which has never been corroborated or debunked, that the character was based on French wrestler Maurice Tillet (1903-1954), who resembled Shrek in many ways. Who was this Tillet, nicknamed “the French angel”?

Stories that ugly mythical figures existed in real life often circulate. For example, there are people who believe that the hunchback monster Quasimodo, the “Hunchback of Notre Dame” who fell in love with a gypsy, actually existed. And the saga of the giants of Drenthe Ellert and Brammert would be based on real monsters that roamed the Drenthe moor in the Middle Ages… But what about Shrek?

Maurice Tillet, the alleged inspirer of the monster Shrek, was the son of French parents and was born in 1903 in Russia, in the Ural Mountains. His parents worked there. When Maurice was fourteen, the Russian Revolution broke out and the family decided to return to France, where they settled in the city of Reims. Maurice had an angelic face, which is why his mother nicknamed him “the angel”.

When Tillet was seventeen, nineteen or twenty, the sources are not unambiguous, something strange happened. One day, his head, arms and legs suddenly started to swell. A visit to a doctor concluded that he had a rare hormonal abnormality known by the medical term acromegaly, also called Mary’s disease.

Maurice Tillet during a wrestling match:

Tillet abandoned his plan to become a lawyer after his terrible illness. After training as an engineer, he decided to enlist in the French navy, where he worked for many years between the wars.

In 1937, Tillet met Lithuanian wrestler Karl Pojello on one of his sea trips. This convinced him to start wrestling. The two became close friends and left for Paris to train together. When World War II broke out, the duo moved to the United States. They settle in Boston, where Tillet has become a well-known personality. Between May 1940 and May 1942, he was the AWA heavyweight world champion.

Despite Tillet’s striking appearance, who many did not call “ beautiful, ” according to some sources, he married a beautiful woman named Olga. In America, he also regularly had a photo with well-known actresses and photo models, including Dorian Leigh. Tillet himself wore his so-called “ugliness” with pride. As a wrestler he used, among other things, the nickname “The ugliest man in the world”.

Tillet was gifted and spoke at least fourteen languages ​​fluently. He was also an excellent chess player, performed as an actor and wrote several poems.

On August 4, 1954, his friend Karl Pojello died of lung cancer. When Tillet heard this news, he suffered a heart attack and died the same day as his closest friend. They were buried in a mass grave in Chicago.

After all, there is no hard evidence that the character in the movie Shrek is really based on Maurice Tillet. The similarities are striking, but film producer DreamWorks has never confirmed that Tillet is the role model.

Also read: Trijntje Keever, perhaps the greatest Dutch woman of all time
…of: The saga of Ellert and Brammert de Denthe