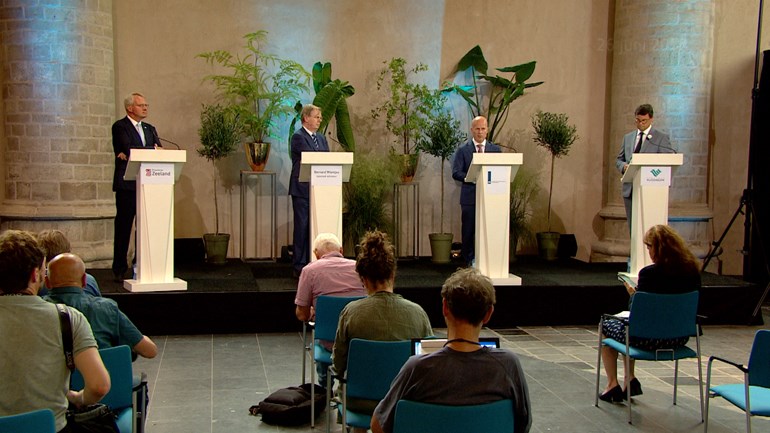 Take to the streets of Vlissingen and talk to people about the compensation program for the marine barracks and you will receive mixed reactions. “Look first, then believe” is the trend. Without surprise. For years there has been talk at all levels about the arrival of the Doorn Maritime Barracks in Vlissingen. The painful result is well known: nothing came at all. Any suspicion about the compensation program is only normal from this perspective.

Wind in the sails

“I don’t like it at all,” said an older lady of the package. Old man bursts into laughter at the official name of the compensation plan Wind in the sails. “Take a boat here in the marina and go up the West Scheldt. So you have the wind in your sails! He sees little benefit in the compensation measures for his town, “poor Vlissingen”.

“I understand very well that this must become tangible for our inhabitants,” said alderman Albert Vador with understanding. “It only happens when the excavators get to work, but before that there’s really a lot going on in the background. “

The exact location of the Vlissingen court complex, the high security prison and the Vlissingen courtrooms has been determined. The reasons are still being negotiated. But construction has not yet started. Opinions in the street are mixed about these ‘EBI-Vlissingen’. From “we already have enough criminals here” to “better lock them up than walk the streets”.

After a three-month delay, a building was found at Bellamy Park for the Strategic Knowledge Center for Subversive Organized Crime. The institute is expected to open after the summer.

Planning for the other knowledge center, the Delta Knowledge Center for Water, Food and Energy, should have been completed on June 1, but was also delayed. This partnership between University College Roosevelt, HZ University of Applied Sciences and Scalda, among others, now has until August 1 to come up with a good plan.

A third deadline concerns the designation of a district which must become without natural gas. The decision to be taken by Vlissingen has been postponed to November 1.

There is no need to worry about Alderman Vader. Not yet. “We’re not worried. But it shouldn’t be a slimy trajectory. We pay close attention to that, because if you let the attention relax, it flows.”

Other measures of the compensation program are underway, but have not yet been implemented. A faster rail link from Zeeland to Randstad is in preparation, but will not take effect until December. In addition, the actions of the water company Evides must be separated from those of the PZEM, which would represent additional money for Zeeland. The Provincial Council and the House of Representatives must take a decision on this matter.

In February, the Netherlands and Flanders signed a declaration of intention to invest two million euros each in improving the railway line from Terneuzen to Ghent. A good intention, but there is no new song yet.

So far, GP training in Zeeland is actually the only measure of the package with a visible result. In March, the first four primary care physicians began their full training as general practitioners in Zeeland. They work in various GP practices in the province and take theoretical courses one day a week at the Erasmus medical center in Rotterdam.

Seven departures in September medical assistants (medical assistant to a doctor) with their training at HZ University in applied sciences. Their teachers come from Arnhem and Nijmegen.