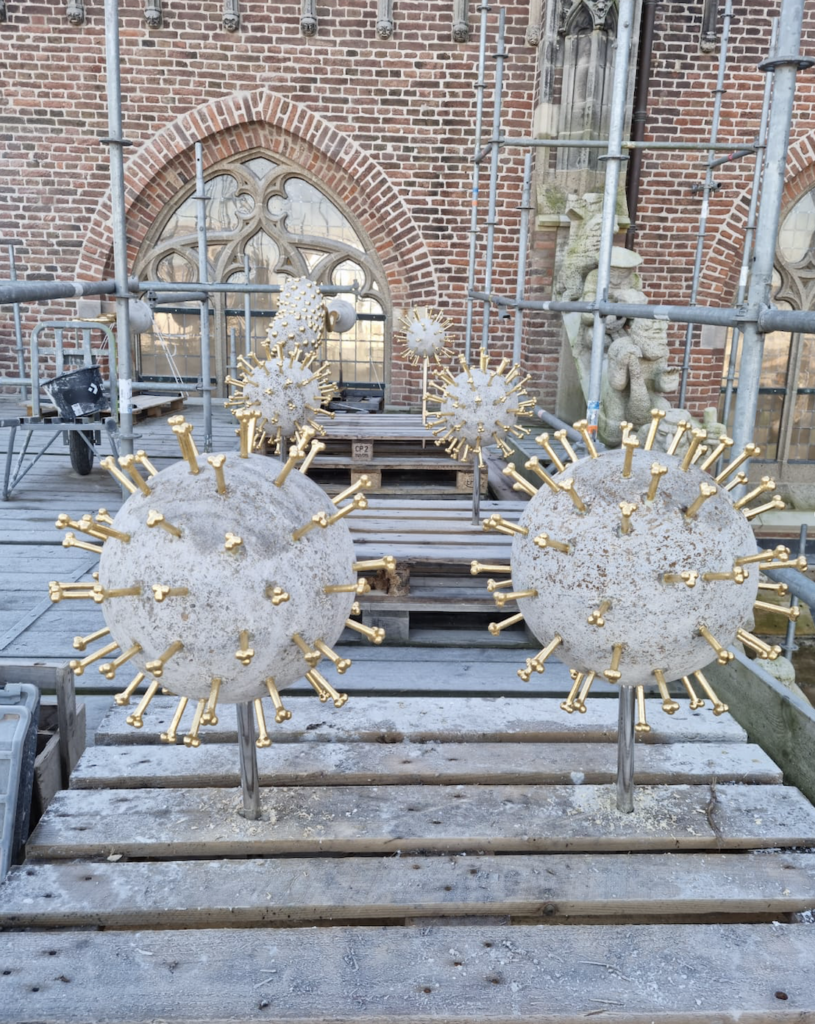 Next Monday, January 17, the last parts of an impressive work of art will be placed on the roof of the Eusebius Church in Arnhem. The work focuses, among other things, on covid viruses, tardigrades and spermatozoa. It was designed by artist Arno Coenen – known for the Markthal Rotterdam – and traditionally executed in stone and steel. It is an ode to science and represents hope for the future.

With his design, Arno Coenen responds to other traditional sculpture groups in the Eusebius Church with the biblical theme of Noah’s ark. Coenen: “When you approach the story of Noah’s Ark with today’s knowledge, it seems alienating: why build a gigantic vessel to save the animal species from the Flood? You can save the contents of the arch at cell level and clone it later.

Or you store the DNA information on a chip: Noah’s ark in your inside pocket. But that doesn’t make the story any less current. Important animal species are still endangered and the earth is threatened by natural disasters. “

Instead of different animals, this new series of flying buttress images therefore consists of a series of magnifications of microscopic phenomena that we can visualize thanks to science and which can tell us more about our place in the cosmos. With his work, Arno Coenen emphasizes the importance of science and at the same time recognizes the role that religion can play in giving people hope and motivating them to shape their future in a positive way.

The mysterious tardigrade, which occurs both on Earth and in space and where science is still a mystery, is well present in the series. There is also an atom, a covid virus, an amoeba and a piece of mycelium. This can be indefinitely supplemented and varied on the church in the future, depending on future scientific developments. Coenen designed the artwork even before the covid pandemic, but now unexpectedly puts that artwork in the spotlight.

Artist Arno Coenen has forged a reputation with monumental works of art in public space, in which he mixes ancient crafts, such as glass mosaic, with contemporary computer graphics. He gained international fame with his contribution to De Markthal in Rotterdam by MVRDV Architects, the large-scale colored ceiling that ended up on the covers of Architecture in the Netherlands Yearbook and Dutch Design Yearbook. He made an important contribution to Beurspassage Amsterdam and finished in the top 3 of the annual architecture panorama of the NRC Handelsblad.

The Eusebius Church, known for the Battle of Arnhem, has been extensively restored over the past ten years. This spring, the church will be free of scaffolding. The placement of this work of art is the last piece of ten years of radical restoration of the Eusebius Church. The church was destroyed during the Battle of Arnhem (1944) and then rebuilt more beautifully than before. During the reconstruction, nearly a hundred modern flying buttress statues were placed on the church. The images on two flying buttresses have proved irreplaceable with the recent restoration. The Eusebius (museum) organization then invited Arno Coenen for a new design. Among other things, the organization aspires to transform this special work of art into a leading cultural attraction. In the recent past, the church has been used as a local event venue.