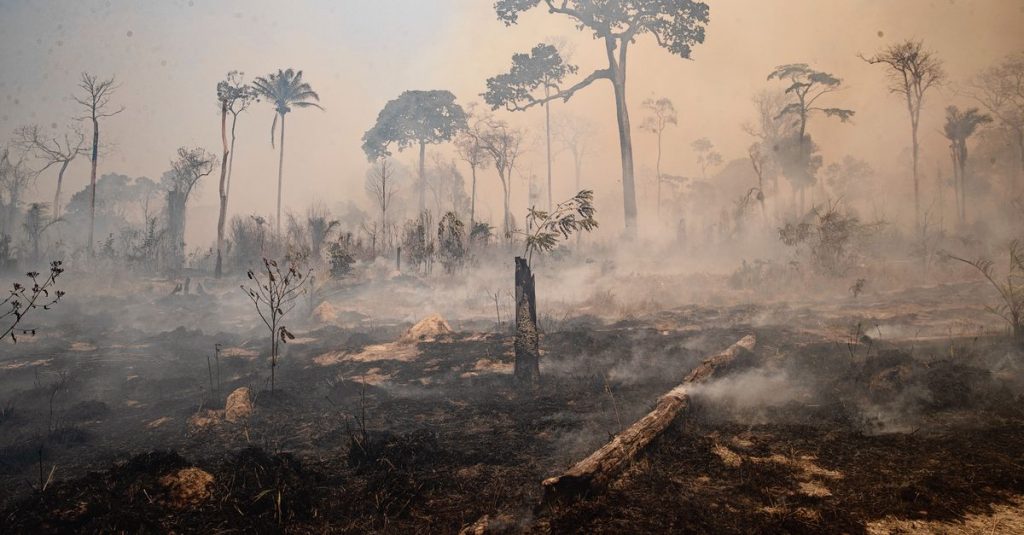 The United Nations IPCC Climate Panel was established in 1988. The first report was released in 1990. The report to be released next Monday is the sixth. The panel operates by consensus, so that no country can further question the findings.

Washington suffered one of the hottest summers in living memory in 1988. It was around 36 degrees when James Hansen expressed his concerns about climate change in a Senate hearing on June 23. Hansen, director of the Institute for Space Studies at NASA, shared his story at the invitation of Democratic Senator Timothy Wirth.

Wirth later said he kept the windows in the room open all night, especially for the occasion, which turned the air conditioning on and it was sweltering heat. According to him, members of the Energy and Raw Materials Committee could already see firsthand what climate change had in store for the world.

Hansen told politicians they shouldn’t ignore the problem anymore. “It is high time to stop the ramblings and recognize that the evidence for the existence of global warming is strong enough,” the climate expert said, according to a report published in The New York Times. The headline above the article read: “Global Warming Has Begun”.

In the 1980s, fears of climate change intensified. But what was the strength of the evidence? How bad would it get? Was it necessary to do something? So what? These were questions that needed to be answered clearly before politicians dared to act. These questions led to the creation of the IPCC, the intergovernmental panel on climate change, in 1988.

The aim is to keep governments informed of all “policy relevant” knowledge on climate change, but without prescribing what to do. For this, the IPCC calls on (thousands) of climatologists, who often work on a voluntary basis for years on reports which draw up the state of play in the field of climate change. A report is published once every five to seven years.

Next week, for the sixth time since the creation of the IPCC, the first part of a new cycle of three reports will be released. This part deals with the scientific basis of climate change. The other two parts, which will be published in the fall and early next year, describe the possibilities for preventing climate change and the (socio-economic) consequences of climate change in different regions of the world.

2 Why was such an international organization created? This is not the case in many other policy areas.

There are several important reasons for this. Climate change was a fairly abstract problem when the IPCC was established, with effects decades behind its causes. This summer’s heat waves, floods and wildfires, as climate change plays a role, are caused by excess greenhouse gases released into the atmosphere decades ago. And if the world stopped using fossil fuels today, warming would continue for a while.

In addition, warming can cause irreversible changes. Once the ice in Greenland or the Arctic begins to melt significantly, there is no way to stop it in the long term. The same goes for melting permafrost.

In addition, greenhouse gases do not respect the limits. Humanity can only solve climate change together. Combining the knowledge of scientists from as many countries as possible into reports that are then approved by all countries increases the chances that countries take responsibility.

3 What influence do countries have on the outcome of the reports? Do they still meet the scientific criteria if politics get involved?

Policy involvement is limited to the summary of reports, which is intended for policy makers. Reports use only scientific research and often span over a thousand pages. They are then read by expert reviewers who can submit comments. All of these comments are assessed and addressed individually. And after the report is published, comments and reactions to them will also be made public, so that everyone can check them.

Reports use scientific research and often cover over a thousand pages

A preliminary draft report, expected Monday, has been examined by 750 experts, according to the IPCC. They submitted 28,462 responses. A second version had over 1,200 readers (both scientists and government experts) and generated 51,887 comments. The summary produced on the basis of the report generated more than 8,000 comments from 47 different countries.

Over the past two weeks, the summary of the report has been presented sentence by sentence, sometimes even verbatim, to policymakers and experts from participating UN member states – scientists are there to ensure that the text final does not deviate from what is in the report itself.

The final result was approved on Friday. This has the advantage that there is consensus on it and that no one can question the science it describes any longer, not even a country like Saudi Arabia, which often resists alarming statements about the consequences of climate change.

This is particularly important for negotiations on international climate policy, where the need to act cannot be questioned.

4 Nevertheless, the IPCC has been the subject of frequent heavy fire in the past. Wasn’t that true?

In 2009, two years after the IPCC received the Nobel Peace Prize, the server of a UK climate institute was hacked. Tens of thousands of emails from climate scientists littered the streets, the Climategate was born – possibly intended to disrupt the important Copenhagen climate summit that took place soon after.

According to climate skeptics, the emails showed a picture of scientists playing the ball and trying to exclude critical thinkers. The phrase ‘Hide the decline‘(hide decline) one of the scientists used to depict something on a graph was seen as evidence that climatologists were deliberately withholding information to make the warming appear worse than it was in reality.

Various investigations followed in which all climatologists were ultimately exonerated. Sure, some emails sometimes said nasty things about skeptics, but there was no evidence of fraud. Even “Hide the Decline,” set to music by climate deniers, turned out to be an innocent commentary in the context in which it was written.

The Climategate, together with some errors in some of the reports, led to an independent investigation into the IPCC procedures. The secretariat reacted clumsily and reluctantly to clearly wrong numbers.

5 Why are new IPCC reports still appearing, surely it is clear that climate change exists?

In the first IPCC report, published in 1990, climatologists wrote that the average temperature on Earth was increasing, but that there was still great uncertainty about the role of humans in this regard. When the second report came out in 1996, the evidence seemed to point to “an observable human influence on global climate”. This clarity only increased in the three reports that followed. In 2001, the recent warming was said to be “likely” (66 percent sure) as a result of human activity, six years later it was called “very likely” (90 percent sure).

Models get more details. A better estimate can be made of when the climate system may shift

In fact, the 2014 report said that it was “extremely likely” (95% certain) that humans are causing the current climate change. Dutch climatologist Leo Meyer, one of the authors of the synthesis report published in November of the same year, summarized the findings in an interview. NRC at the time as follows: “The influence of man on climate change is crystal clear. The consequences are increasingly visible around the world. The prognosis is increasingly serious. And it is still possible to limit the risks. But the longer you wait, the faster it becomes expensive. “

The new report may not be able to overcome this so easily. But in the meantime, knowledge about climate change is growing rapidly. Studies are emerging on the relationship between climate change and weather events such as the recent heat wave in western Canada. Climate models that predict what may happen are more detailed and a better estimate can be made of when climate systems may shift. All of this additional knowledge should keep decision makers on their toes.