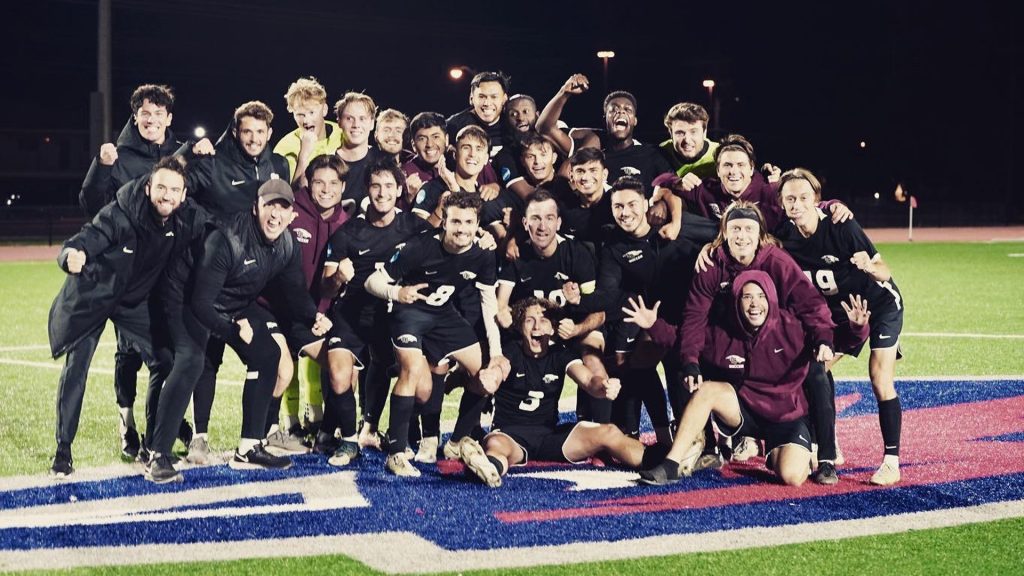 He left in the summer of 2021 to start the adventure in the United States with the Oklahoma City OC Eagles. Joep Claassen played until his departure for “the United States” at ZSV1 and was a youth coach. This week he will be back in the Netherlands for a winter break of a few weeks and he could also take a look at the Kranenmortel derby between his former club and SV Deurne next Saturday.

Joep has now completed two seasons of football and a year and a half of study at Oklahoma Christian University: “I’m fine. The last few months have been busy combining football and studying, but luckily we now have a long winter break during which I can go home to see my family and friends. In the summer I chose to stay here so it’s been a while since I’ve seen everyone.”

‘Stamppot or special frikadel’
During Claassen’s time in the United States, he communicated intensely with the “home front”. Almost every day he is in contact with someone from the Netherlands, because of course he also misses things: “First of all, of course, our father, our mother and our sister Steffie. I also miss fun with friends and Dutch cuisine, such as stew or a special frikadel. And the fun in the ZSV canteen and the training of the ZSV youth, which I have always enjoyed very much.

Country
Claassen resides in the United States in the city of Oklahoma City in the state of Oklahoma, in the north of Texas. He likes it, he explains: “The state of Oklahoma has a reputation for not really doing much, with a lot of countryside and vast expanses. Fortunately, my school is in town and there is plenty to do here. Oklahoma City and the surrounding neighborhoods have a population of just over one million.

Study
Joep lives in an apartment on the campus of Oklahoma Christian University (OC) and is studying business administration. The training he had for it in the Netherlands was also in English, so he didn’t really have any problems with the switch. Last period Joep shared the apartment with Ruben from Groningen, who was also part of the football team. “Unfortunately, he had to return to the Netherlands due to circumstances. There are also two other Dutch people at school, one of whom is on the baseball team and the other on athletics,” explains Joep.

good click
Joep ended up with the OC Eagles in Oklahoma through Gemert’s Kings Talent company. “They help Dutch boys and girls who want to combine their sport and study in the United States. After speaking to a number of different schools across the United States, the choice fell on OC as there was a very good connection with the coach, Mitchell Sowerby. He was also new to school and the plan was to build something. I liked that and in the meantime I have also done quite well with the performances this season as proof. The objective for next year is clear: to win the ‘national championship’”, explains Claassen.

High speed
While we are only at the end of November, two seasons have already passed. It has everything to do with how quickly games are played in the United States. “The season is ending here at an incredibly high rate. We played 24 games in three months. Sports here are divided into “autumn” and “spring” sports. This means that some sports have their season in the fall and others in the spring,” explains Joep.

Travel a lot
He explains that this division means that you are asked a lot in a short time: “It takes a lot of getting used to at the beginning. During the season, you play a physically demanding game every Saturday and Wednesday. Then the training consists mainly of recovery and sometimes tactics because it is impossible to train hard. There’s a lot of travel around that with several away games being far apart. So very busy.

Friendships
Despite the frenetic pace, Joep is optimistic about the future of the OC Eagles: “Because I’ve been here a little longer now, you know more people and you have time to build something. Not only friendships within the team, but also with other people on campus and that way you get to know more and more people. I am also now a coach at the local football club, which also generates contacts. There, I train twice a week and we have a competition on the weekends. And after a tough season for the team in my freshman year, we made it to the tournament finals this season and broke school records. This tournament is like a playoff after the regular season to determine the champion who will go on to the national championship next.

Best striker
Personally, it was a good year for Claassen in which he became captain and top scorer and was selected to the All-Conference Team and Team of the Tournament. “It’s different awards they give out here, because they love it in the States. There’s something for every achievement,” jokes Joep.

In-form players
In the OC Eagles team that Joep plays for, the majority of players come from all over the world. According to him, the international character of the team creates a special dynamic: “There are a lot of talents from all over the world. I think tactically the level is maybe a little less than in the Netherlands, but the pace is incredibly high. Teams are allowed to change in the second half, so fit players are constantly brought in who can give full throttle.

“See many countries”
During the summer holidays, Claassen worked with a Brazilian boy in a football camp that crossed the United States. “It was ideal because I could work and see a lot of countries at the same time. I’ve been to Phoenix and Flagstaff Arizona, Santa Fe New Mexico and ended up in Denver, Colorado. Camp was from 9am to 12am so after that we had plenty of time to explore the area. So I could see a lot of cool places. The United States is so big that literally every different form of nature or site can be found in this country,” says Joep enthusiastically.

Rocky Mountains
Until January 8, he will be back in the Netherlands for a while during the winter break: “I don’t really have big plans, it will mainly consist of spending time with friends and family. I want to spend as much time as possible with them in the six weeks I have. Then he returns to Oklahoma to start quietly with the OC Eagles. “So in the spring we are not in an official season and then the week is training, on the ground and in the weight room. Then we also have more time to do fun things. Something on the agenda is skiing in the Rocky Mountains of Colorado because I met people there during the summer,” says Claassen.

Perfect closure
He would actually be graduating in April or May next year, but decided to stay on for another season: “Then I will be graduating in the fall of 2023. Ideal for me because then I can take one more season in which we hope to go very far.. come on and it would be the perfect end to a really cool time.