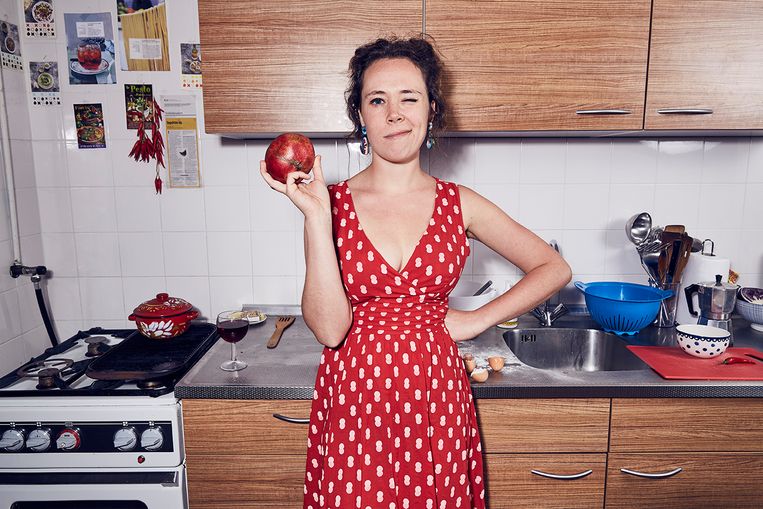 Culinary historian Charlotte Kleyn explores tasty stories and craft them in her kitchen.

I was in the United States for the first time, at the beginning of last year. A week in New York with great food from all over the world – I ate Malay, Japanese, Uzbek, Cantonese, Mexican, and Lebanese among others – but also a few days in the university town of Ithaca, in northern India. New York State. University or not, it was far, far away from Europe and New York, with forests, lakes, big wooden houses and huge cars. No one seemed to be walking the streets, and almost everything apparently existed in a drive-through variant, so you don’t have to leave your car for burgers, medicine, or cash anymore.

I was taken to Uncle Joe’s Grill & Sports Bar. Here, even more than in the rest of the city, I had the idea that I had ended up in an American series like Twin Peaks. The wooden walls were covered with large screens displaying baseball, basketball, golf and boxing games, and we were in a dinner stand with tall glasses of beer for us. On the menu hamburgers, burritos and dirty fries: fries with different toppings. I think this dish is getting more and more popular – also under the name loaded fries.

At Uncle Joe’s you get the fries with cheddar cheese, chili sauce, and raw onion, but there’s more. Canadian poutine, with cheese curds and gravy, is famous. In the Netherlands, La Place had recently loaded fries (“hand-cut fries with pulled chicken, gadogado sauce and fried onions”) on the menu, and kapsalon fries are of course much older. Atjarmayonnaise Rendang fries and beef bourguignon fries also fall into this category.My version is Mexican, with black beans, cilantro and lime, but you can still accompany it all over the place: add sour cream or avocado, for example, or grated cheese on top, sprinkle and place under an oven rack for a few more minutes.

Fry or fry the fries according to the packaging or according to your own recipe. Meanwhile, heat the oil in a pan and brown the garlic until it begins to brown. Rinse the beans and add them to the pan. Fry for 5 minutes over high heat. Season with cumin, paprika and salt and turn off the heat. Remove the fries from the oven (or remove them from the fryer and lay them out on an ovenproof dish) and sprinkle with salt if necessary. Divide the beans, radishes, spring onion and cilantro on top. Serve with chipotle sauce.

Liesbeth Maliepaard, Charlotte Kleyn, Fow Pyng Hu, Samuel Levie, and Merijn Tol tell stories behind the food in this section, along with a recipe.