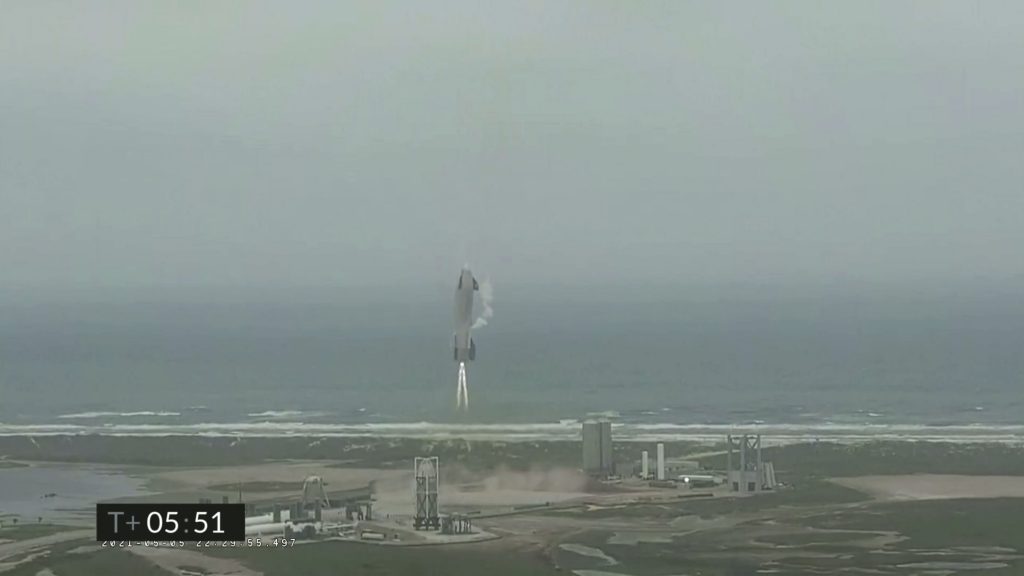 After four high-altitude test flights – all of which ended in an explosion on landing – SpaceX finally managed to land a prototype of its Starship rocket without breaking down. An important step for future missions to the Moon and Mars.

Between December 2020 and March 2021, SpaceX made four attempts to launch prototype ships at high altitude. They all finished with an explosion, shortly before, shortly after or at the time of landing. On May 5, Elon Musk’s company finally managed to land the missile without fail.

The SN15 prototype took off, as usual, from SpaceX’s launch pad in Boca Chica, Texas. The spacecraft was propelled by its three huge engines, and when it reached its maximum height, two of the engines were shut down. The rocket then hovered at an altitude of about 6 miles before shutting down its last engine. The missile then tilted to one side to begin its descent towards the ground, almost horizontally. The engines were then restarted to right the machine, then land it successfully.

A few flames escaped the airstrip, but they were quickly put out with water cannons. Such a fire “is not uncommon” given the amount of fuel ultimately used, reassured John Insprucker, SpaceX commentator on the live video.

“Nominal Starship Landing!” Elon Musk tweeted after landing, meaning “the maneuver went off without a hitch.”

With Starship, SpaceX has dizzying ambitions. Elon Musk’s company was recently chosen by NASA to organize the return of the United States to the Moon, scheduled for 2024. A decision difficult to digest for Jeff Bezos: Blue Origin has a filed a complaint. The ultimate goal of Starship is to launch humans on Mars, where Elon Musk would like to build a colony.

The other great feature of SpaceX is that he wants to make his missiles reusable. This is why the successful landing on Wednesday is a very big step forward.

Meanwhile, SpaceX has also started to assemble the Super Heavy, a booster for the Starship. The assembly will be approximately 120 meters long and will be able to carry 100 tonnes on board. Super Heavy will serve as the rocket first stage, essential for putting Starship into orbit, including the Moon and Mars.