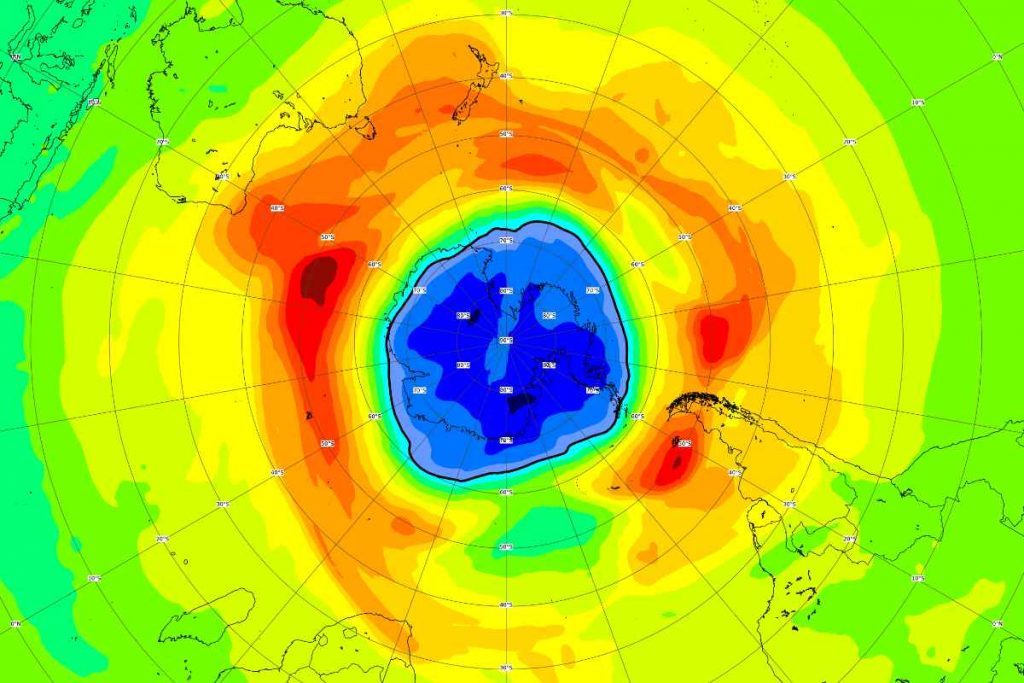 The hole is already bigger than Antarctica itself.

The ozone layer is located in the stratosphere – at an altitude of about 40 kilometers. This protects us from harmful UV rays and is therefore very important. However, every September, during the Australian spring, a “hole” forms in the ozone layer. And this recurring gap is extraordinarily large this year.

Size fluctuations
In the spring in the southern hemisphere, the famous ozone hole forms over Antarctica every year. It is not, moreover, a real hole, but a continuous thinning of the ozone layer. The hole reaches its maximum size between mid-September and mid-October. Then, when temperatures start to rise in the stratosphere in late spring in the southern hemisphere, ozone depletion slows down and the polar vortex weakens. As a result, the hole in the ozone layer is narrowing slowly but steadily, until it is completely gone by December.

Researchers are closely monitoring the development of the hole. And after a fairly standard start, the ozone hole has grown significantly over the past week. The hole is now 23 million square kilometers, making it even bigger than Antarctica itself.

big hole
“At the start of the season, the hole in the ozone layer developed as expected,” said Vincent-Henri Peuch, director of the atmospheric monitoring service at Copernicus CAMS. “It’s very similar to last year when the hole didn’t have a great start either, but later in the season turned into one of the longest lasting ozone holes at our base. of data. Now our forecast shows that this year’s hole has evolved into a slightly larger hole than usual. The vortex is quite stable and the stratospheric temperatures are even lower than last year. We’re looking at a pretty big and possibly deep hole in the ozone layer. “

Size of the ozone hole in 2021. Image:
contains modified Copernicus Sentinel data (2021), processed by the DLR

Last year’s hole
So it seems that history is repeating itself. This last year’s ozone hole over Antarctica had finally become one of the biggest and deepest in recent years. The gap widened rapidly from mid-August, peaking at around 25 million square kilometers on October 2. The great hole in the ozone layer was fed by a powerful, stable and cold polar vortex that constantly maintained the temperature of the ozone layer above Antarctica. This contrasted sharply with the unusually small ozone hole that formed in 2019. But also this year it looks like the gap will be unusually large. “The course of the hole in the ozone layer in the coming months will be extremely interesting,” notes researcher Antje Inness.

recovery
Still, it looks like the hole in the ozone layer is closing. This is mainly due to the Montreal Protocol, which was established in 1987 and has been called one of the most successful environmental agreements in the world. The Montreal Protocol – which has been signed by 200 countries – aims to protect the ozone layer by phasing out the production and consumption of harmful substances (see box).

What was that?
CFCs are long-lived chemical compounds that have been widely used in the production of refrigerants, aerosols, chemical solvents, and building insulation. When emitted, chemicals can travel up to the stratosphere. Here, they are broken down by ultraviolet radiation from the sun, releasing chlorine atoms. These atoms destroy the ozone molecules. And that’s bad news, because ozone protects life on our planet by absorbing potentially harmful UV rays. For example, UV radiation can cause skin cancer and cataracts and damage flora. To combat CFCs, the Montreal Protocol on Substances that Deplete the Ozone Layer (Montreal Protocol for short) was created. Governments have pledged to reduce the production of substances that deplete the ozone layer. And in the meantime, the so-called “hole in the ozone layer” is actually closing.

Since the ban on halogenated hydrocarbons, the ozone layer has shown signs of recovery. But it’s a slow process. Scientists predict that it will take at least 2060 or even 2070 before ozone-depleting substances are completely eliminated. This is because some of the ozone-depleting substances emitted by human activities persist in the stratosphere for decades. Therefore, according to the researchers, continued surveillance is essential to ensure that the Montreal Protocol is applied.