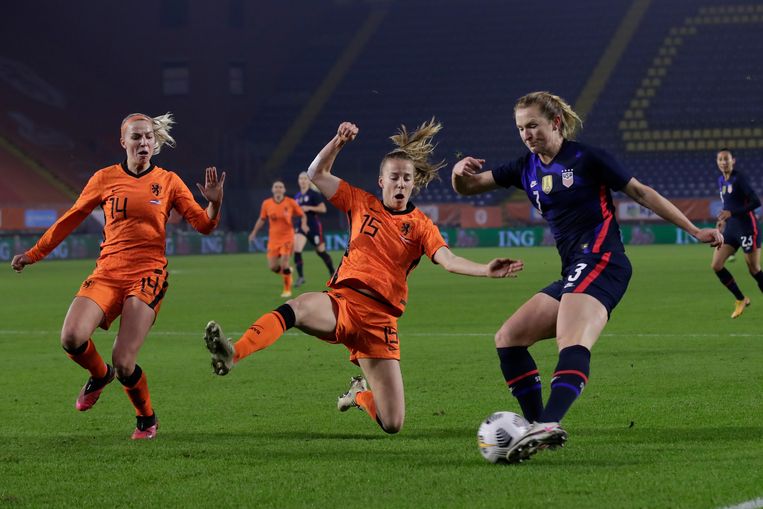 Of course, any comparison is wrong. On July 7, the footballers of the Netherlands and the United States played in front of 57,900 spectators in Lyon with the world title at stake. Friday evening, the two countries met again, in an empty stadium in Breda with only the proverbial honor as the highest reward.

Sarina Wiegman must have been absent. The Dutch national coach left Zeist training camp in the afternoon due to family circumstances. Arjan Veurink took his place. There was also a new face in the American canoe. Macedonian-born Vlatko Andonovski took over from Jill Ellis after the World Cup, who retired after two world titles and 132 games.

Andonovski started with nine players who were also part of the starting lineup in the World Cup final won 2-0 by the United States. Only forwards Alex Morgan (on the couch) and Megan Rapinoe (not available) were missing. There were more transfers in the Netherlands. Desiree van Lunteren retired after the World Cup and Vivianne Miedema, Stefanie van der Gragt and Anouk Dekker were unable to act due to injuries.

Kneel down for the BLM movement

After the national anthems, in which nine American players knelt to protest police brutality against the black population, and a minute of silence for Diego Maradona, a match erupted that made comparisons to the World Cup final. . As in Lyon, America dominated and the Netherlands emerged slowly.

However, it was not until just before half-time that the American predominance was expressed in the score. After a Lynn Williams goal was falsely dismissed for an alleged offside, Rose Lavelle, who also scored in Lyon, placed the ball in the top corner with a nice loop (0-1). In the second half, during which the Netherlands failed to create a single chance, substitute Kristie Mewis made it 0-2.

After the first defeat since the World Cup final, the Dutch will close the year on Tuesday in Breda with the last European Championship qualifying match against Kosovo. After that, the sights will be fully focused on the Tokyo Olympics, although the preparation is not yet fully mapped out. During the next three international matches, in February, April and June, there will be training sessions, but against which we do not yet know.

Also read: Megan Rapinoe, the best footballer in the world, is always and everywhere on the barricades

The striking Megan Rapinoe did not compete with America against the Netherlands. The best football star in the world has now a biography.

Orange looks the truth in the eye: the United States is too strong

The bubble in which Dutch footballers the last four weeks until the World Cup final has, almost inevitably, been punctured.