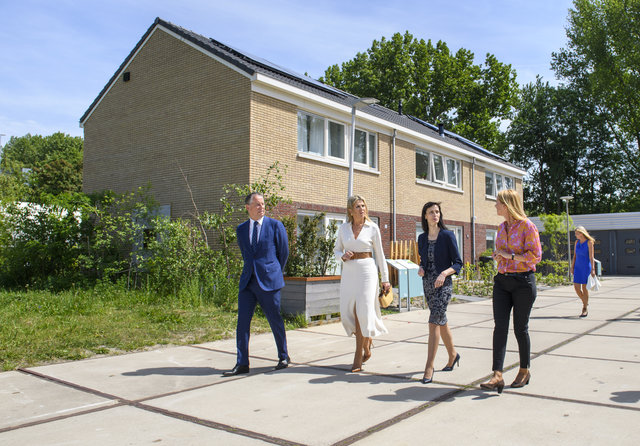 During an extensive visit to the campus, Her Majesty Queen Máxima and the European Commissioner for Innovation, Research, Culture, Education and Youth, Mariya Gabriel, today met various scientists and innovations of the TU Delft. During the discussions, the focus was on improving the path that scientific innovations must follow to be used in society.

artificial cell
The tour started at the Faculty of Applied Sciences, where Prof. Marileen Dogterom took the group on a tour of the labs in the Bionanoscience department. Scientists from the so-called European Synthetic Cell Initiative spoke about their research into the smallest building blocks of cells. They are studying exactly how these building blocks are put together, with the ambition of being able to manufacture the first functional artificial cell themselves.

experimental garden
The group then strolled through The Green Village, a proving ground on the TU Delft campus, run by director Marjan Kreijns. In this proving ground, innovations aimed at making the built environment more sustainable are tested. Because the houses are actually inhabited, new techniques in the field of energy transition and climate adaptation can be immediately adapted to the needs of the inhabitants.

Innovation ecosystem
It was followed by a round table on science and innovation. Innovation is carried out at TU Delft within the innovation ecosystem around the university, consisting of companies, research institutes and field laboratories. Entrepreneurs from Delft shared their experiences with entrepreneurship; Delft scientists spoke about the relationship between their research and its journey to society. Rector Magnificus Tim van der Hagen concludes: “It is nice to see that the examples of Delft practice are thus helping to increase the impact of science at European level.

quantum computer
The visit ended with a visit from Professor Lieven Vandersypen of QuTech, the research institute in Delft where scientists are working to develop scalable prototypes of a quantum computer and a secure quantum internet. These new techniques are promising and have major consequences for the digital society of tomorrow. In the lab, the group spoke with scientists and start-up founders from Delft who are already working with the latest quantum techniques.