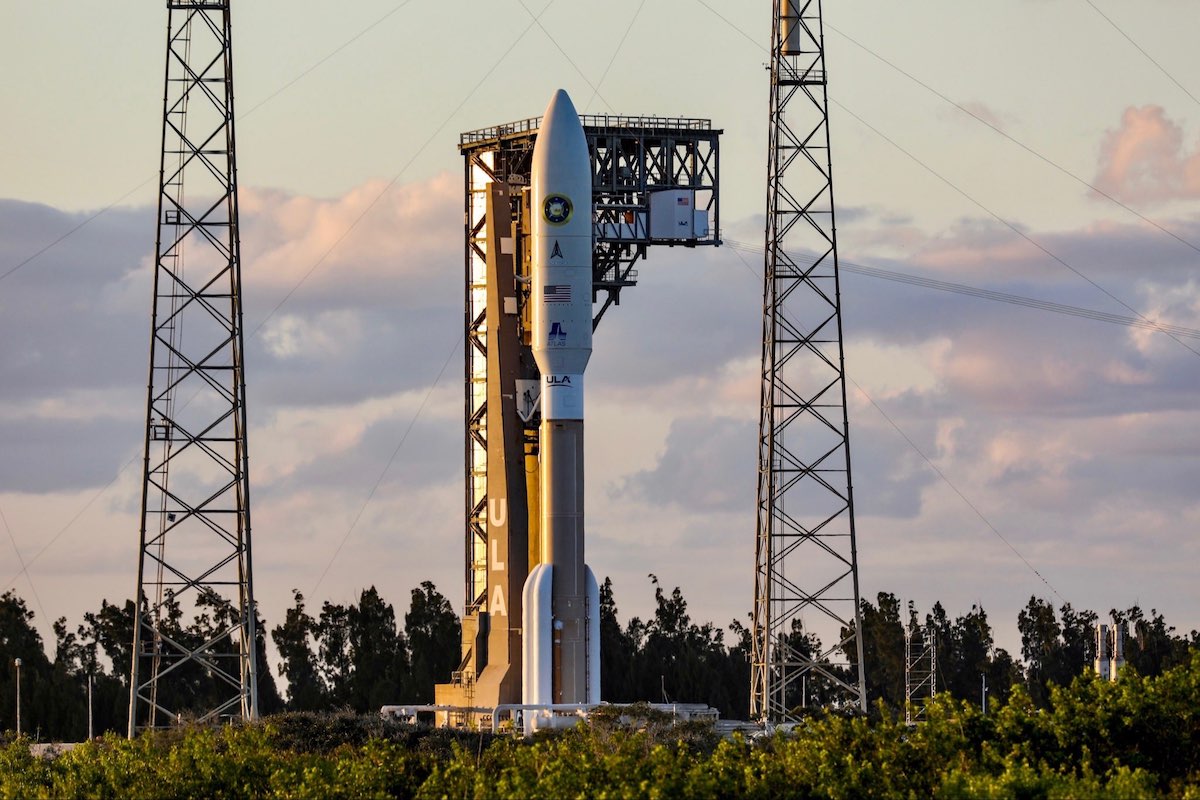 The United Launch Alliance Atlas 5 rocket was repaired to its launch pad in Cape Canaveral on Tuesday afternoon, ready to explode after sunset on Wednesday with a assorted load to the U.S. government’s spy satellite agency.

The 206-foot (63m) Atlas 5 rocket landed at Bat 41 at Cape Canaveral Air Force Base on Tuesday at 5:30 p.m., following a 1,800-foot journey from the ULA’s vertical integration facility. Pushed by the engines, the Atlas 5 and its mobile launch pad followed the train tracks leading to the launch pad on the Bat 41.

Rollout followed the same path the rocket traveled on Monday when the ULA transferred the Atlas 5 to the launch site ahead of the scheduled lift on Tuesday evening. But officials re-ordered the Atlas 5 inside the VIP to address a concern in the line of an environmental control system that feeds air conditionally to the National Revaluation Office pay at the top of the rocket.

After returning the rocket to the VIP on Monday night, technicians replaced the complex environmental control system tube, which could be damaged by high winds during the first hike of the Atlas 5. ULA President and CEO Tori Bruno tweeted that the company had installed a reinforced pipe in its place.

The return of the Atlas 5 to the VIF allowed workers to use the sites to access the location of the environmental control system line, which the ULA said was inaccessible to the launch site.

After the repair work was completed, the floor crew returned to the work platform and rolled the Atlas 5 back to Bat 41. Once per pad, the teams planned to integrate the Atlas 5i into the ground systems in the Bat 41, as well as the ULA’s ground staff inspections, checkouts and other activities.

Estimates predict that the east-northeast surface air at the launch site will be 20 to 26 knots, with broken clouds at an altitude of 3,000 feet. The temperature at the time of release should be 75 degrees Fahrenheit.

The liftoff is scheduled for 19 minutes after sunset. Assuming clear skies, the Atlas 5 and its exit path could offer a spectacular view of the twilight sky over Florida’s space coast.

Launched on Wednesday, NROL-101 marks the 86th flight of the Atlas 5 rocket since 2002 and the fifth Atlas 5 flight this year. This is the 30th mission of the ULA, the NRO’s spy satellites that provide optical and radar images, intercepted signals and communications and other data to US government intelligence agencies.

The NRO has not released information about the pilot flight on the NROL-101 mission, but warning notices issued to pilots and sailors suggest that the Atlas 5 rocket will travel in a northeasterly direction from Cape Canaveral, previously following a route parallel to the U.S. East Coast flying over Canadian waters.

This path indicates that the Atlas 5 will release the NRO payload into high-slope orbit.

The NRO owns data relay satellites and a number of spacecraft, designed to intercept communication signals in the elliptical Molniya type orbit, which extend at very high points about 25,000 miles (40,000 kilometers) from Earth. Those orbits tilt 63 degrees to the equator, giving the satellites regular views of Russia and other parts of the Northern Hemisphere.

The Atlas 5, which is scheduled to launch on Wednesday, may be targeting a similar Molniya-type orbit, according to several independent experts monitoring the operation of the spy satellite.

The launch vehicle for the NROL-101 mission will be powered by Atlas 5’s “531” configuration with three solid rocket boosters and a 5.4 meter diameter (17.7-ft) payload fairing.

The payload justification for the NROL-101 mission will fly in its medium-length variant, which provides more size for assorted spacecraft on board than the standard short-length 5.4-meter-diameter shield. The medium length 5.4 meter exhibition has flown in seven previous Atlas 5 passengers.

This is the fourth time the Atlas 5 rocket has flown in the 531 variant, but it’s the debut with the new GEM63 strap-on boosters produced by Northrobe Kroman. The same shape, fit and functionality of the AJ-60A solid rocket boosters produced by Aerojet Rocketine flew on all previous Atlas 5 passengers requiring strap-on motors.

According to ULA, GEM63 motors are low cost and easy to handle during launch products. The company’s next-generation Vulcan Center rocket GM 63XL will fly with a larger Northrobe Grooman solid booster, and the introduction of new rocket motors in the Atlas 5 will help ease risk before the launch of the first Vulcan Centaur, the U.S.A.

The three GEM 63 boosters on the NROL-101 mission ignite in the launch pad and burn for 94 seconds, with 97+ pounds (44.2 metric tons) of pre-packaged solid impulse T + plus falling into the ocean in 1 minute, 53 seconds before jetting.

The RT-180 main engine in the first stage of the Atlas 5 will continue firing, and then the rocket will push its payload reasoning D + plus 3 minutes, 19 seconds, after ascending above the dense, lower layers of the atmosphere.

The United Launch Alliance will end its live broadcast after splitting the payload fair, and the rest of the work will be played out in government-mandated news obscurity. NRO usually requires its publishing contractors to complete the live broadcast within the first few minutes of flight.

Assuming that the rest of the work follows a standard Atlas 5 output profile, the RD-180 engine will shut down within four and a half minutes on the plane, the RL10 engine of the first phase separation and centrifugal ignition platform after a few seconds.

The RL10 engine may have fired one or more times on Wednesday evening flight, depending on the final orbit aimed at using the top-secret NRO payload.