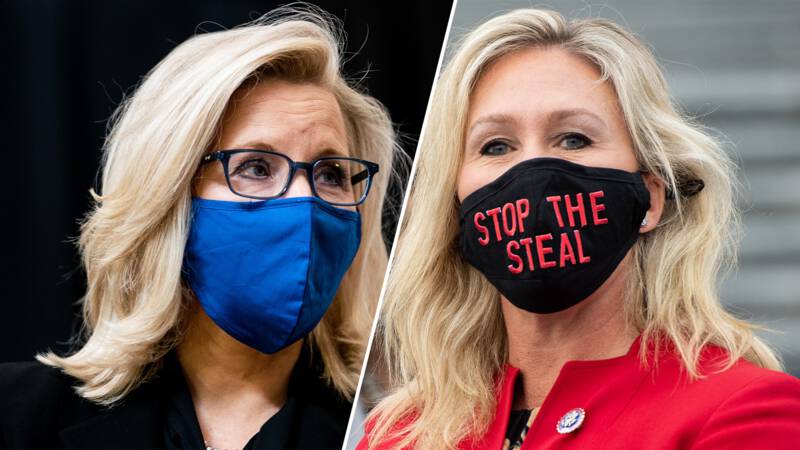 The Republican Party is at war with itself. Now that Donald Trump has left for his Florida resort, Washington MPs must decide which direction the party is going. And serious accusations are brought between them. For example, group members accuse each other of selling “senseless lies”.

Last night, the 211 Republican faction members in the House of Representatives gathered in an atmosphere of crisis to discuss the division, but that did not bring a closer solution.

At the center of the fight are two factions: enraged conspiratorial thinker Marjorie Taylor Greene and old establishment voice of moderate Liz Cheney. The two women won at the parliamentary group meeting, and the stalemate therefore continues.

Georgia delegate Greene is new to the House and has served on two House committees, the Budget and Education Committee. She was known to be on the far right of the party, but after posts about her true views earlier this month, there was a discussion about whether she could be a member of these two important committees.

According to her, two fatal school shootings, in which dozens of children were killed, were organized by opponents of free possession of firearms. She is also convinced that the California wildfires were started with laser beams, with the help of wealthy Jews who wanted to make money with them.

Greene also liked Facebook posts calling for Democratic leader Nancy Pelosi to be “shot in the head”. According to her, the Democrats are in any case “satanic pedophiles”, at the heart of the ideas of the QAnon conspiratorial movement.

Despite this, it turned out last night that she enjoys considerable support in the Republican group. Party leader Kevin McCarthy decided not to kick her out of both committees, but to give Greene the floor, after which she received a standing ovation from a significant part of the group. “He’s come down in half,” said those present.

It is always difficult for Republican leaders to condemn statements like Greene’s. Conspiracy thinking and “ alternative facts ” have found their way into the party under Donald Trump in recent years. From the theory that Barack Obama was not born in America to Trump’s lies about his electoral loss in recent months.

Yet some of them are now expressing their frustration about it. Earlier this week, powerful Senate Leader Mitch McConnell called “stupid lies and conspiracy theories” “cancer for the party and the country.” This was surprising, because McConnell never turned on President Trump’s lies and plots in recent years.

House party leader Kevin McCarthy didn’t want to go as far as McConnell. He asked Greene this week to apologize for his most extreme statements. Not only did she refuse this, but she also immediately started fundraising for her cause. This indicates that Greene does not intend to moderate his tone.