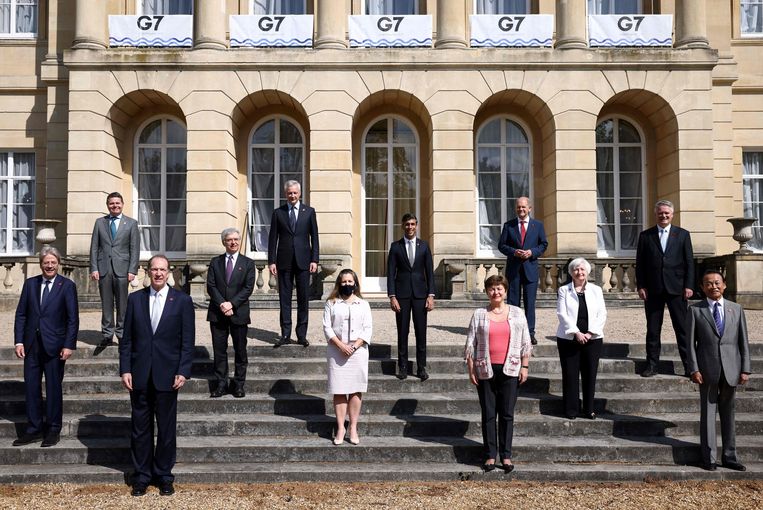 The EU, the G7, the G20 (the top 20 economies) and the OECD have been talking for years about the fight against tax evasion by large companies. Countries have blamed each other for introducing lower and lower corporate tax rates (race down) and waited for the other to do something about it. The G7 agreement is seen as a breakthrough and a start.

“This is good news for fair taxes and solidarity and bad news for tax havens,” said Scholz. According to his American colleague Yellen, the agreement puts an end to the race to lower income taxes.

Not only do the G7 countries (United States, Germany, France, Italy, United Kingdom, Japan, Canada) agree on a minimum profit tax of 15%, but a distribution key has also been established where tax must be paid. Otherwise, some countries would be fishing behind the net.

With the agreement of the G7, the global minimum rate of income tax is not yet a reality. In July, the G20 countries must rally to it. They will also have to sort out some details, for example on the definition of profit.

The agreement is then finalized within the OECD, the Organization for Economic Co-operation and Development. By then, EU countries should be on the same page. This is not an easy task with member states like Ireland and Hungary having a profit tax lower than the proposed 15%. Concerned EU officials expect it will be “a few more years” before the global minimum tax rate on profits is effectively levied.

This does not change the fact that the G7 agreement is a breakthrough. In recent years, the fight against tax-dodging multinationals has been hampered by a divided EU and reluctant US. New US President Biden has broken the ban by proposing to charge multinationals 21% tax on their profits.

This percentage was considered too high by several countries (including in the EU). The deal now talks about a minimum of 15 percent, countries can take more. “This is a big step forward towards unprecedented global corporate tax reform,” said European Economic Commissioner Gentiloni after the G7 meeting.

The United States is now demanding the removal of the digital tax in EU countries such as France and Italy. This tax mainly affects American companies like Google and Apple. The European Commission wants to introduce such an EU-wide digital tax. Not only to skim the profits of tech giants, but also as a new source of income for the EU. According to the EU Tax Observatory think tank, founded this week, a 15% profit tax would bring European treasuries € 50 billion a year.

The think tank points out that in 1985 the average corporate income tax was still 50 percent, it is now 21 percent – countries like Ireland are still well below at 12.5 percent. The differences and numerous loopholes in national tax laws make it easy for multinationals to pay significantly less income tax than small and medium-sized businesses.