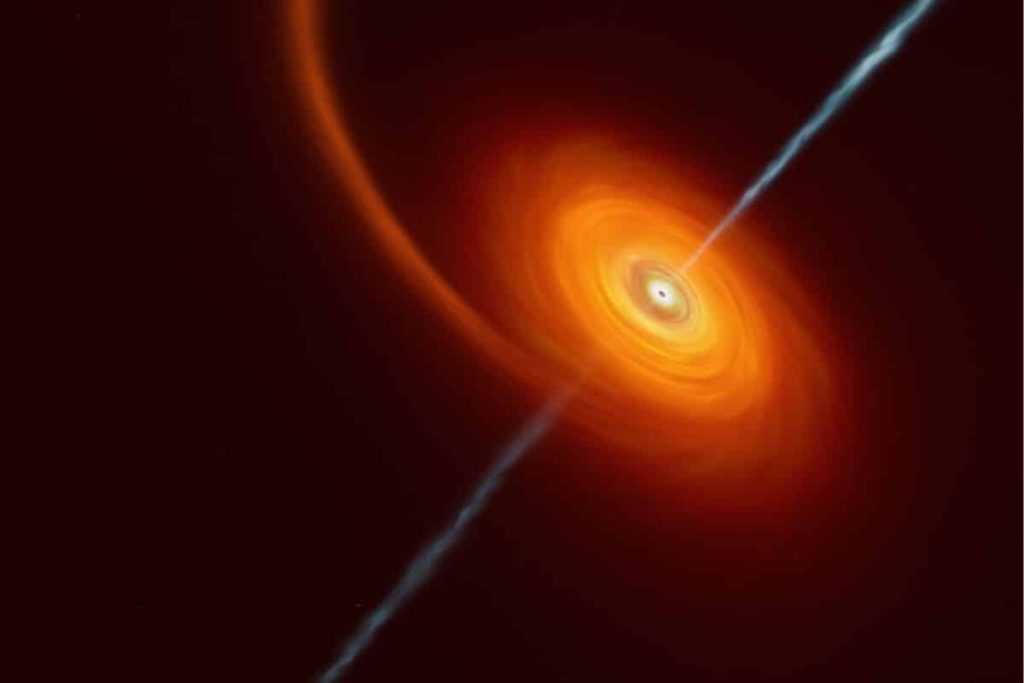 The unfortunate star was completely shredded, resulting in a record-breaking luminous explosion that emitted more light than 1,000 trillion suns combined!

Earlier this year, astronomers discovered an unusually bright source of light in the night sky. Several telescopes, including the Very Large Telescope (VLT), have been pointed at the mysterious source by researchers around the world. And guess what? The signal probably comes from a jet of material (a jet) ejected from a supermassive black hole at near light speed. And that jet turns out to be the product of a black hole that suddenly began to devour a nearby star, releasing a huge amount of energy.

Tidal disturbance event
Stars that accidentally come too close to a black hole are ripped apart by its enormous tidal forces. Such an event is also called a tidal disturbance events (TDE). In about one percent of cases, beams of plasma and radiation emanate from the poles of the spinning black hole. In 1971, black hole pioneer John Wheeler described the concept of jet TDEs as “a tube of toothpaste squeezed firmly in the middle, causing matter to be ejected at both ends”.

This animation shows matter falling from a star into a black hole at the center of a distant galaxy, creating “jets” of matter and radiation. Some of the star’s material is sucked in and swirls around the black hole, creating the disc pictured above. In rare cases (like this one), matter and radiation eject from the poles of the black hole. In the case of AT2022cmc, these “jets” were detected with several telescopes, including the VLT, which determined that this was the most distant example of such an event.

Rare
These types of phenomena are extremely rare and do not reveal themselves easily, which makes them difficult to study. “We’ve only seen a handful of jet-powered TDEs so far, and these are still very exotic and poorly understood events,” said researcher Nial Tanvir. Astronomers are therefore constantly on the lookout for these extreme phenomena to understand exactly how the jets form and why they only occur at such low TDEs.

Treasure hunt
As part of this search, many telescopes regularly scan the sky for signs of short-lived – often extreme – events, which can then be examined in more detail by telescopes such as the VLT. In February of this year, astronomers then discovered the mysterious new source of visible light. Named AT2022cmc, the event resembled a gamma-ray burst – the most powerful light source in the universe. The prospect of witnessing this rare phenomenon has prompted astronomers to activate telescopes around the world to get a closer look at the mysterious light source.

Freshest and brightest ever
A total of 21 telescopes collected all kinds of light, from high-energy gamma rays to radio waves. Several theories on what could have caused the light flash have been discussed. But in the end, the only scenario that fits the data is a rare TDE, where an ill-fated star is swallowed by a hungry black hole. When stellar matter then falls into the black hole, it releases a burst of light energy that researchers can detect. And of the few jet TDEs discovered so far, AT2022cmc is both the farthest and the brightest.

How?
The source is about 8.5 billion light-years away, more than halfway across the universe. AT2022cmc’s light began its journey when the Universe was only about a third of its current age. How can such a distant event appear so brightly in our skies? The team thinks the spitting jet may be pointing directly at Earth, making the signal brighter than if the jet was pointing in a different direction.

visible light
That’s not even the only special thing. “The few jet-powered TDEs observed to date were initially spotted by telescopes detecting high-energy gamma and X-rays,” Perley said. “But AT2022cmc is the first discovery of a TDE in visible light.” This means that there is apparently another way to detect TDEs with jets and study these rare events in the extreme environments around black holes.

Observations provide more information about supermassive black holes. This could shed light on how black holes feed and grow. Moreover, the hunt for TDEs continues unabated. And there may be many more to discover in the near future. In the coming years, more powerful telescopes capable of revealing TDEs will be put into operation. “We expect to find many more TDEs in the future,” says researcher MatteoLucchini. “Then we can also find out exactly how black holes launch the observed extremely powerful jets.”