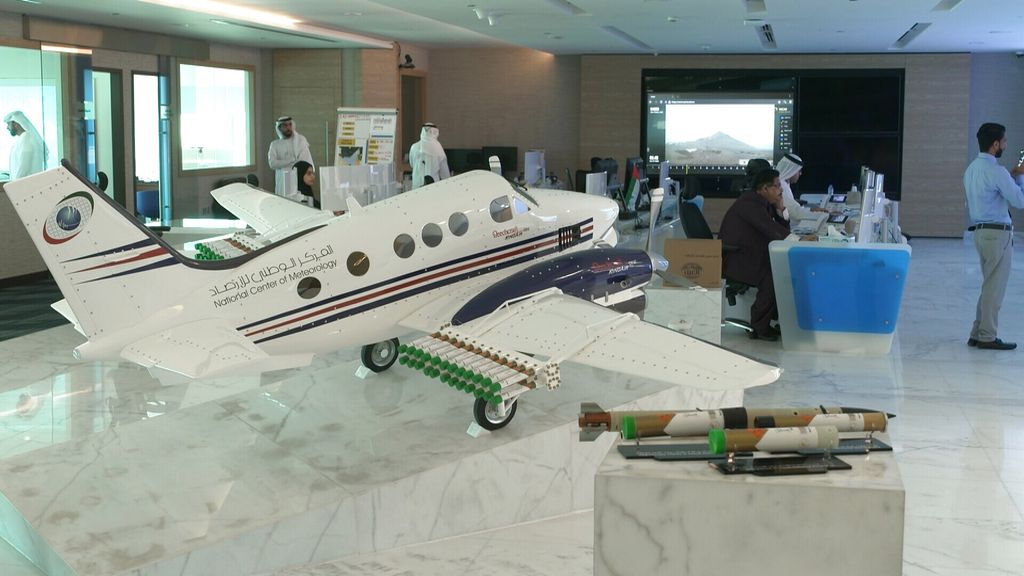 Attempts to make it rain are as old as mankind. With rain dances, asking the gods for help or offerings. In Abu Dhabi, they have another method to impose the rain: cloud seeding or cloud modification. Chemicals or salt particles are projected into a cloud.

In the fight against drought and climate change, they have been studying cloud modification in the United Arab Emirates for some time. Thanks to large research budgets and international collaboration, they are now pioneering the region with their ambitious program at the Center for Meteorology (NCM) in Abu Dhabi.

Chasing rain in the desert: this is how cloud seeding works

How does cloud editing work?

A cloud is made up of small water droplets. They are too small to fall. To extract rain from such a cloud, you add a substance, for example silver iodide or salt particles.

These particles attract water vapor and droplets which freeze on them. The resulting ice crystals in the cloud grow and clump together until they become too heavy and fall. Just like raindrops.

The technique is not new, but its effectiveness is scientifically difficult to say. “You can never do a control study,” says Herman Russchenberg, professor of atmospheric research at TU Delft. “So who’s to say it wouldn’t have started raining without intervention?”

Pier Siebesma, a fellow professor in Delft, also says that the effect of cloud modification should not be overestimated. “Israel did it for years, but stopped because it wasn’t getting enough.”

However, Abu Dhabi experts have no doubts. “Recent research from us shows that there is an increase in precipitation due to cloud modification. Under normal conditions by 10-15% and under optimal conditions by 23-25%,” said researcher Ahmad Kamali. And that’s a huge increase for a desert country in the Middle East.

An American, Vincent Schaefer, would have been the first to modify the clouds. As a researcher at General Electric, he conducted research in the 1940s on how to prevent airplanes from freezing in the air. In 1946, during an experiment, he threw 6 pounds of dry ice from an airplane directly into a cloud. It started snowing almost immediately.

Due to global warming, more and more countries are interested in techniques and technologies to control the weather a little. In Abu Dhabi, they are not the only ones working on cloud modification. Dozens of countries are experimenting with it, including China, Russia, India and the United States. China goes the furthest in this area. This country wants to have a whole system by 2025 to actively influence the weather.

In several cases, the forcing of the rains has already caused disputes between neighboring countries. One accusing the other of stealing the rain. It was between Iran and Israel, India and China are discussing it and Saudi Arabia and Oman are not happy with the Emirates.

Because if Abu Dhabi modifies the exaggerated clouds so that it starts to rain, then there is nothing left for the neighboring countries. “It’s a justified criticism,” Professor Russchenberg said. “This rain only falls once, so if you manipulate this cloud so that the rain falls on your territory before the clouds reach the neighbors, you are stealing the rain.”

In the future, we may be able to make many other adjustments to weather and climate. We then speak of geo-engineering or climatic engineering. With this, you are adapting the earth’s natural systems to combat global warming. “It goes much further than just making it rain,” says Professor Siebesma. “With this you will cool the earth on a global scale, for example by blocking or reflecting sunlight.”

But there are plenty of downsides. “To begin with, good international research on these methods must first be done,” warns Siebesma. “We have no idea what the effect is on the planet. On rainfall, drought, airflow and long-term temperature. But people want to start using it, so we need to investigate the effects.”

In Abu Dhabi, they focus first on cloud seeding and they are determined to continue. They have little doubt that this will ultimately have a positive effect on the region. Driver Ahmed al Jaberi: “We are not expecting immediate results. This is an important project for the future, the next fifty to a hundred years. We may already be able to reap the fruits, but I am thinking above all of the future of my children and their grandchildren. I hope for a greener region for the next generations.