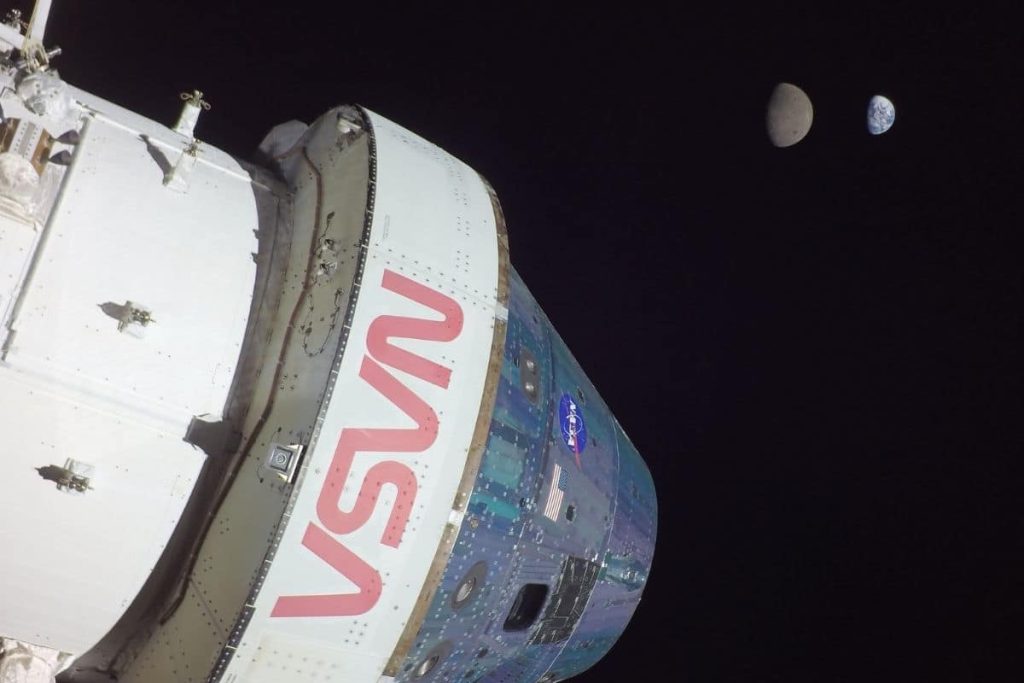 In one of the images, there even appears to be an eclipse and the moon is seen obscuring much of the earth.

The Orion unmanned spacecraft is on its ultimate test mission. And this takes the spacecraft developed by the US space agency not only to the moon, but also far beyond. Having already hovered over the lunar surface some 80 miles away, Orion accelerated deeper into space. And yesterday it reached the furthest point in the distant retrograde orbit that Orion follows. At that time, the spacecraft was more than 432,000 kilometers from Earth.

Stunning pictures
It’s a record; never before has a spacecraft designed to transport humans ventured so deep into space. The great distance from Earth also seems to give Orion a unique perspective on his home planet. After the spacecraft has already made great close-up images of the moon. And also managed to capture (part of) the moon and the earth in a single snapshot, some of the most beautiful images happen to be made from deep space. Because far beyond the moon, Orion could take the ultimate family portrait and photograph both the moon and the earth in all their glory.

But it does not stop there. From this great distance, Orion also saw how the moon moved in front of the earth.

Orion is healthy
And meanwhile, Orion is doing well – about 13 days after launch. “It’s amazing how well the mission went,” said NASA Director Bill Nelson. Of course, the mission is not over yet; now that the spacecraft has reached the furthest point of its far retrograde orbit, it is brought back to Earth. It should arrive there again on December 11.

A close-up photo of the moon’s surface. Orion did this as he approached the lunar surface about 80 miles away. Picture: NASA.

Control List
And with that comes the end of a long-awaited and often-delayed mission: the Artemis I mission. The purpose of this mission is to extensively test both the brand new Orion spacecraft and the brand new Space Launch System designed to propel Orion into space. To that end, NASA has compiled an extensive checklist of components to be tested, of which approximately 37.5% have been checked off to date. However, the mission remains exciting until the last moment; the checklist also contains many things that can only be tested during Orion’s return to earth (a violent ride through Earth’s atmosphere, followed by a splashdown in the Pacific Ocean).

The earthworm
In 1968, while orbiting the Moon, astronauts captured an amazing photo of Earth rising above the lunar surface. Orion also witnessed such an “Earthrise” a few days ago and recorded it as well.

Important test flight
It all depends on the test flight. Because if everything goes according to plan, it’s the prelude to more. Much more. For example, a successful Artemis I should pave the way for Artemis II: a mission in which astronauts take place in Orion and then fly over the moon. After which, place in Artemis III: during this mission, some astronauts will indeed return to the surface of the moon.

And all of this is the prelude to even more. After all, manned flights to the Moon must ultimately lead to the establishment of a base on the Moon, where astronauts can stay longer. The goal is to gain knowledge and experience that will be useful to them when NASA sets its sights on Mars: the next celestial body Americans want to send people to in the near future.