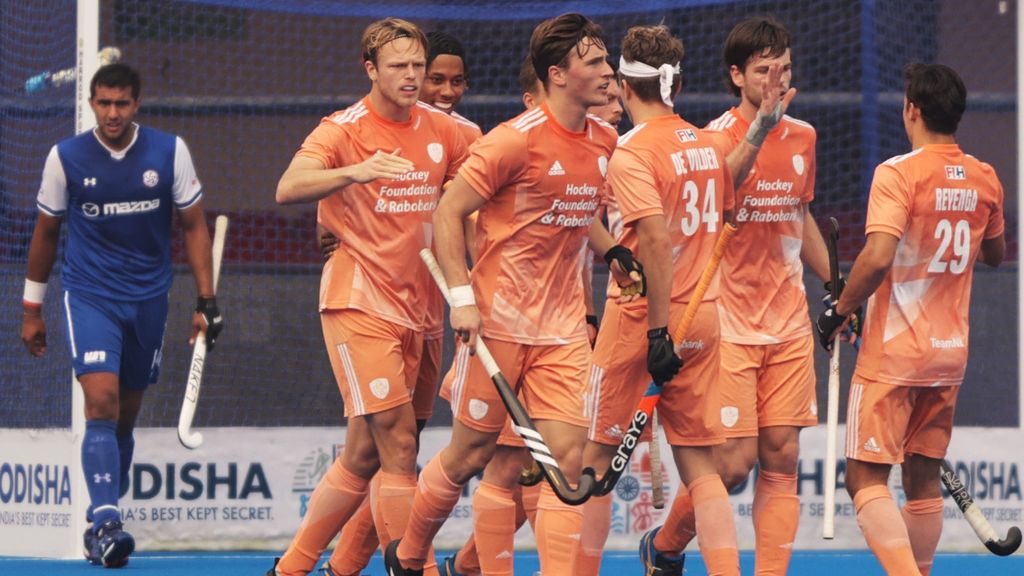 As expected, Dutch hockey players qualified for the quarter-finals of the World Cup in India without any difficulty. After two smooth 4-0 wins over Malaysia and New Zealand, Chile were beaten 14-0 in Bhubaneswar.

It is the biggest victory ever in the World Cup. Before today, the record was held by Australia, who beat South Africa 12-0 in 2010.

The Dutch will continue the tournament as group winners next Wednesday in the quarter-finals. The opponent is not yet known, for this an intermediate round must first be played between the teams having finished second and third in their group.

Janssen: ‘This team has no other mode’

In Bhubaneswar, it didn’t take long for the Orange to have their first chances but it took some time before the first goal was a fact. Jip Janssen scored after six minutes from a penalty corner (1-0).

Chile holds out for a while

Starting out in the World Cup, Chile, the lowest-ranked country of all participants with a 23rd place in the world rankings, then became just as dangerous thanks to Martin Rodriguez. A first shot was blocked and the rebound was fired wide by Rodriguez.

The Netherlands, three-time world champions, then put pressure on the Chilean defense, which held out for a long time, but capitulated halfway through the second quarter. After goals from Derck de Vilder and Thijs van Dam, Thierry Brinkman and Janssen made it 5-0 at halftime.

After the break, it was clear that Chile had lost their strength and the Netherlands went wild in the third quarter. With an 11-0 lead, national coach Jeroen Delmee’s side entered the final quarter, in which the Netherlands managed to find the goal three more times.

Reserve goalkeeper Maurits Visser, who came on in the second half, was tested in the fourth quarter. He kept his goal clean with two good saves. Janssen was eventually the Dutch side’s top scorer with four penalty corners used.

After last month’s Pro League, the Netherlands had already played two exhibition games against Chile. They finished 5-0 and 6-0. Before that, the two teams had met only once, in 1999, the Dutch won 12-1.