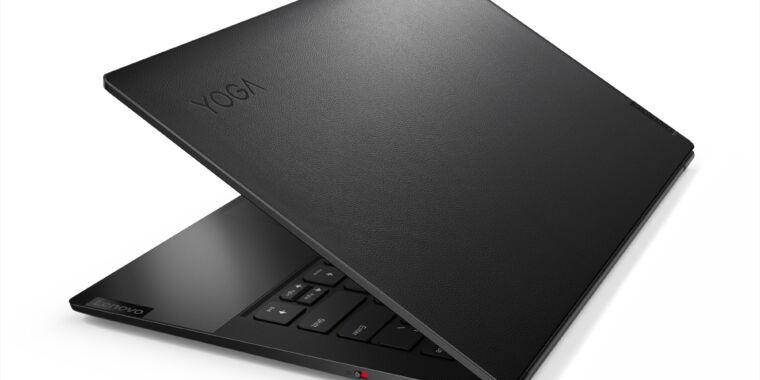 PC- and gadget-maker Lenovo has announced a suite of consumer products for the holiday season this year, including three new Yoga-brand Windows laptops.

The new models include new-generation Intel Core CPUs and Intel Xe graphics. The 9i’s 15-inch model offers CPU configurations maxing out with an Intel Core i9 HK, can be configured with discrete graphics cards as speedy as Nvidia’s GTX 1650 Ti, and offers up to 16GB of DDR4 RAM and 2TB of SSD storage. The 9i can also include a 4K touchscreen with a maximum brightness of 500 nits—just enough to qualify for the bare minimum HDR specification. The 14-inch variant of the 9i includes two Thunderbolt 4 ports, while the 15-inch version (and the 9i Slim) offer three.

Perhaps more interesting than the same-as-most-competing-laptops specs is the design: Lenovo has produced leather-exterior versions of two of these laptops (the two 14-inch models).

The Yoga line might be the star of the show, but it doesn’t comprise the entirety of Lenovo’s laptop lineup. The company also announced the gaming-oriented Legion Slim 7i. As with many laptops, it’s available in a wide range of specific configurations. The graphics—all-important for a gaming laptop, of course—can scale up to the NVIDIA GeForce RTX 2060, a midrange gaming laptop GPU.

The Legion Slim 7i is also equipped with a 10th-generation Intel Core i9 HK CPU and can be configured with up to 32GB of RAM and 2TB of solid-state storage. It weighs shy of four pounds and comes with a 15.6-inch display, so it’s designed as a relatively portable gaming machine. The display comes in either 4K at 60Hz or FullHD at 144Hz. The Legion Slim 7i is expected to ship in October with a starting price of $1,329.

Lenovo introduced other products besides the laptops, too.

The Lenovo Tab P11 Pro is an Android tablet that aims to compete with the iPad and various Chrome OS devices. It has an 11.5-inch, allegedly HDR-ready OLED display with a 2,560×1,600-pixel resolution, four JBL speakers with Dolby Atmos, face recognition-based unlocking, and a Snapdragon 730G system-on-a-chip. It’s expected in November at $499.

Finally, Lenovo also introduced the Smart Clock Essential, a bare-bones device that essentially amounts to a 3-watt Google Assistant speaker with a 4-inch LED screen. It’s expected to hit retailers by the end of the year at a suggested price of $50.