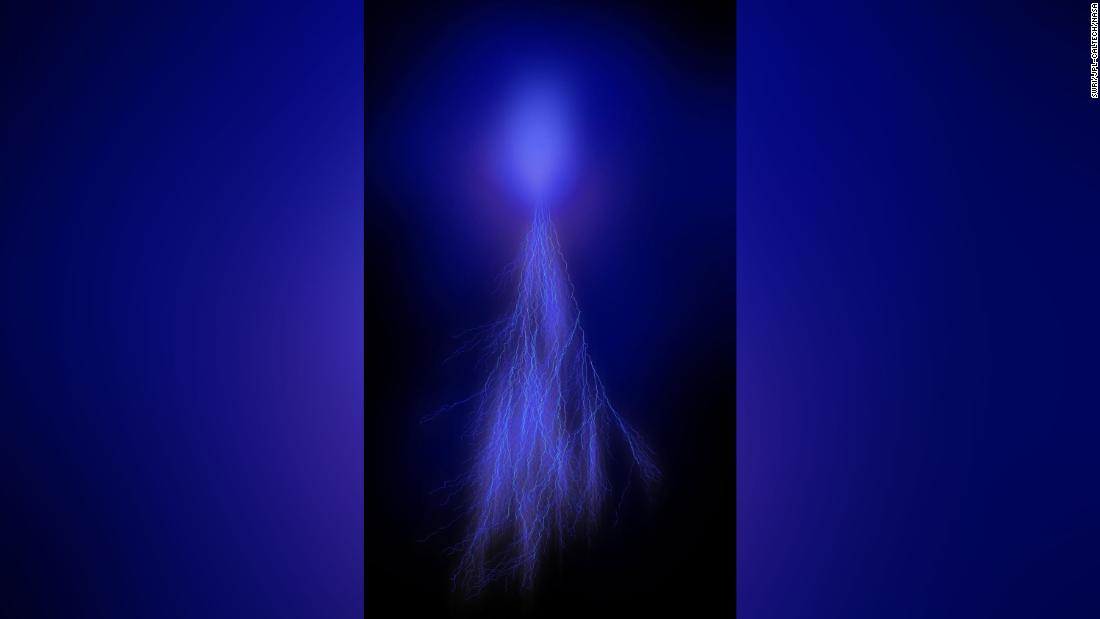 This Jack-O-Lamp-SQ view of Jupiter is a mosaic of images taken by the Gemini North Telescope in Hawaii. The bright spots escape Jupiter’s internal heat through holes in the planet’s largest cloud cover.

This part captured by Juno’s Junocom Imager shows a portion of Jupiter’s southern equator. But it is flipped to show the expansion of Jupiter’s atmosphere, pointing the poles left and right, from top to bottom.

In this image captured by Juno, six hurricanes are fixed at Jupiter’s South Pole. A small hurricane, seen in yellow on the bottom right, has recently joined the party.

An artist’s idea of ​​a collision between a young Jupiter and a giant, yet-emerging protoplanet in the early solar system.

These dramatic loops over Jupiter are atmospheric features. Clouds revolve around the circular feature in the jet stream region.

Is it a dolphin on Thursday? No, but it certainly sounds like one. It’s really a cloud, it’s like swimming through the clouds in the southern temperature belt.

This amazing image of Jupiter was captured by NASA’s Juno spacecraft, which made the eighth flight of the gas giant.

Algorithmic based scaling and coloring reveal a clear look at the Great Red Spot in July 2017.

NASA structured a comparison of its own Earth image with the image of Jupiter taken by astronomer Christopher Coe.

This artist’s concept shows the polar orbits from NASA’s Juno spacecraft on Thursday.

This image shows Jupiter’s South Pole, seen from NASA’s Juno spacecraft at an altitude of 32,000 miles (52,000 km). Oval features hurricanes up to 600 miles (1,000 km) in diameter. Several images taken with the Junocom tool in three orbits were combined to show all areas in daylight, enhanced color and stereographic scheme.

Jupiter’s North Pole comes into view as NASA’s Juno spacecraft approaches the giant planet. This view of Jupiter was taken when Juno was 437,000 miles (703,000 kilometers) away from the planet’s 36 orbiting birds.

This infrared image captured the unprecedented view of Jupiter’s southern aurora on August 27, 2016 by NASA’s Juno spacecraft. Juno’s unique polar orbit offers the first opportunity to explore this part of the gas-giant planet in detail.

NASA’s Juno spacecraft has returned the first photo of Jupiter to the left since it entered orbit around the planet. This photo was taken from the first images taken by Junocom and three of the four largest moons on the vast planet: from left, Io, Europa and Canmeet.

An example depicts NASA’s Juno spacecraft entering Jupiter’s orbit. Juno will observe Jupiter from a polar orbit, coming about 3,000 miles (5,000 kilometers) from the cloud top of the gas giant.

This is the final scene of Juno taken by Juno before the on-board instruments run to prepare for orbit. This image was taken on June 29, 2016, while the spacecraft was 3.3 million miles (5.3 million kilometers) from Jupiter.

NASA’s Hubble Space Telescope captured images of Jupiter’s auroras at the poles of the gas giant. The observations were supported by measurements taken by Juno.

Jupiter and the four largest moons of the gas planet Io, Europa, Conmeet and Callisto are seen in a photo taken by Juno on June 21, 2016. The spacecraft was 6.8 million miles (10.9 million kilometers) from the planet.

Juno flew to Earth in October 2014. All three images were taken by the spacecraft’s Junocom.

Three Lego statues fly in the Juno spacecraft. They refer to the Roman god Jupiter; His wife Juno; And Galileo Galilei, the scientist who discovered Jupiter’s four large moons on January 7, 1610.

Technicians used a crane to lower Juno and the spacecraft loaded fuel for its mission.

Techies are testing the three largest solar systems operating the Juno spacecraft. In this photo taken on February 2, 2011, each solar system opens at a Lockheed Martin Space Systems station in Denver.