There could be some excitement tomorrow around two of the market’s favorite stocks.

While the market caps of the companies will remain the same, some are saying the moves will make shares “more accessible to a broader base of investors” and therefore a new catalyst for the “Retail Bros.”

Others say it could lead to some profit-taking, with traders cashing in on a record run following the recent split announcements.

Apple: Since the company’s split disclosure on Jul. 30, shares have jumped 30%, nearly half of the 70% gain the stock registered YTD. This marks Apple’s fifth stock split as a public company. Apple conducted a seven-for-one split on June 9, 2014, and two-for-one splits on June 16, 1987, June 21, 2000, and Feb. 28, 2005. Had Apple never split its stock, shares would currently sell for around $28,000. Apple has also been the most influential stock in the DJIA, but its split will change that starting Monday.

Tesla: Shares of the EV maker have jumped 61% since Aug. 11 (when is announced a split), building on an already impressive surge this year that saw shares surge more than 400% and hitting 33 record closes in the process. The rally has also boosted the company’s market valuation to around $409B, and made it the eighth biggest company in the U.S. by market cap. 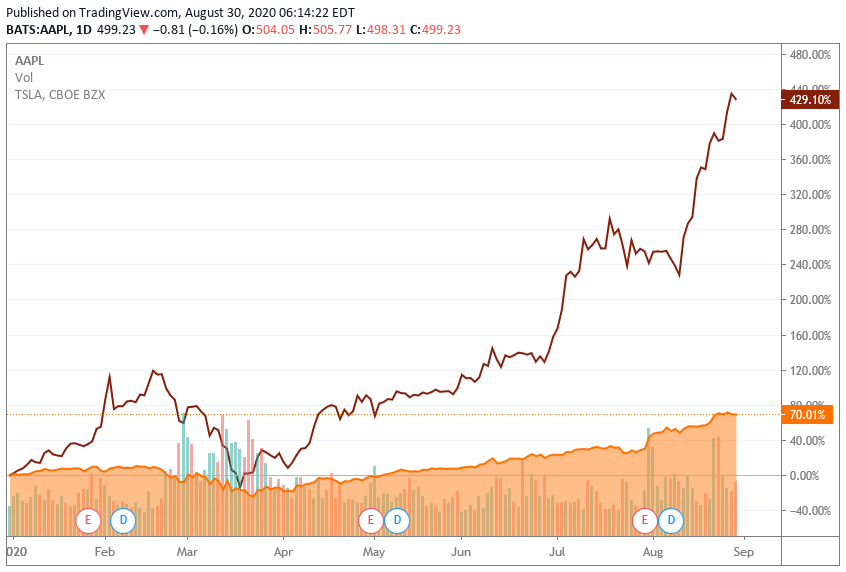 Should you buy/sell at the new levels? Price targets? Other forecasts? Comment below.

The Netflix entertainment branch makes a big deal with Sony