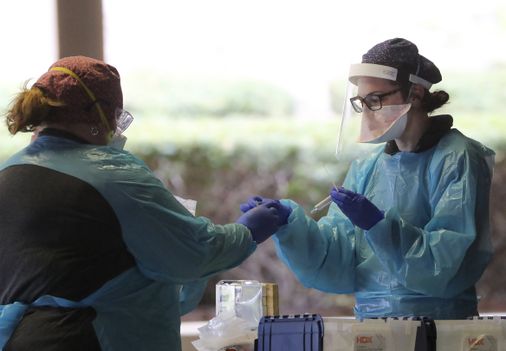 The increase in the number of affected patients is far from the spring upsurge. However, it is increasingly manifesting in many hospitals known as red zones – communities determined by state health officials increase the risk of corona virus infections.

At Lowell General Hospital, where the number of COVID-19 patients is lower than most days in August, the daily census now triples to between 11 and 15 patients, said epidemiologist Dr Adam Weston.

“The good news is that we don’t see our numbers going up dramatically, but we are concerned that the community is constantly spreading, which could lead to more events,” Weston said.

Lowell In about 30 cities and towns Wednesday’s infection rates were at a level determined by state officials to allow higher commercial and entertainment venues to reopen.

Like many hospitals, Lowell General was suddenly trapped in a swamp with COVID-19 patients in March and April and had to stop many medical tests and surgeries to stay ahead of the uprising. But that peak subsided very quickly, and in the summer hospitals often returned to normal operations.

Now, Weston said, his hospital and colleagues in the Welfare Force, which includes Tufts Medical Center in Boston and Melroswakefield Hospital, hope they can sustain the high plateau of corona virus patients for months to come.

“Many people predict a low-altitude, but very long curve, which spreads over a long period of time,” he said.

“Confidence and planning go hand in hand with COVID care and routine hospital care,” he said. “But All plans will be fine until you get to the battlefield. ”

South Coast Health, which includes St. Luke’s Hospital in New Bedford, has nearly doubled the number of daily COVID-19 cases in the past two weeks from 10 to 18. There is a new Bedford in the Red Zone communities.

Jackie Somerville, senior vice president and chief nursing officer for the South Coast Hospitals Group, is concerned that many residents are reducing their safety after months of reminders to wear masks and community distance. Exhaustion comes as schools reopen and the weather is cold. As more activities go inside, the risk of infection increases.

“We certainly see COVID fatigue in all communities,” Somerville said. “Being careful in use is more important than ever [personal protective gear] Within our hospital, we need to have South Coast ambassadors to emulate what awareness is like. ”

For the first time, the South Coast is now forcing all staff to receive flu shots, as many hospitals did many years ago, to protect patients and workers from the spread of the virus. Health leaders say this year’s flu scenario will be mandatory to avoid a simultaneous outbreak of influenza and COVID-19, which could overwhelm the state’s health care system.

“We don’t want to see individuals getting both because we don’t know what it will be like,” Somerville said.

At the Umas Memorial Medical Center in Worcester, there has been a slow increase in COVID-19 patients. Worcester is another Red Zone community.

That risk is now seen among hospital staff, said Dr. Richard Ellison, an epidemiologist at UMass.

“At the end of June and in July, we went without testing an employee positively, but not now,” Ellison said. “Several times a week we identify an employee” Positive. And infections are not from work, but from spreading in the community, he said.

Social exchange seems to be growing in many Massachusetts communities. Rt.live, An online site created by the founders of Instagram to track how fast COVID-19 is spreading in each state, ranked Massachusetts on Sunday behind Wyoming, Montana and New Hampshire with its fourth fastest spread.

In addition, recent data from the Massachusetts Department of Health show that the number and percentage of positive cases has grown exponentially in recent days – a complex trend for the state medical community.

“We have serious concerns about daily individual positive test results, which have increased by about 3 percent since the summer, and there has been a sharp increase in daily new cases, which in many cases have exceeded 500 in recent weeks,” the Massachusetts Medical Association recently reported.

“As the cold weather approaches, every effort must be made to slow down the spread of the virus and prevent the outbreak of cases when moving several indoors, which will have the potential to drown out our state’s health care resources and keep children in school,” the statement said.

The state hospital association says healthcare companies have used a coveted recession over the summer to stockpile personal protective equipment and prepare for “every situation” that could lead to a tricky virus outbreak.

“We hope this tireless work will put hospitals in the best position to move quickly when they are delivered with the rise of Govt patients,” the association said in a statement, “although non-Govt services can be safely maintained.”