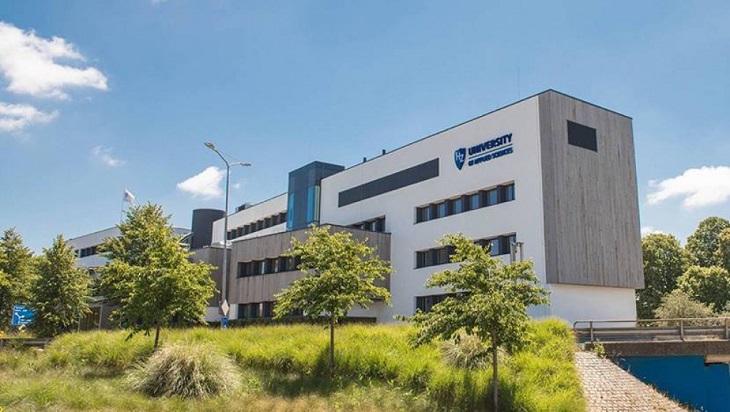 Campus Zeeland is the ultimate collaboration between businesses, knowledge and research institutions and governments in Zeeland. In addition to the Vlissingen location, the Hogeschool Zeeland (HZ) wanted to establish itself in Middelburg to participate in the Bèta Campus Zeeland, which is part of Campus Zeeland, through which the knowledge infrastructure of Zeeland will be taken to a higher level.

Further efforts are needed to strengthen economic growth and innovation capacity in Zeeland. In order to develop a stimulating campus in Middelburg for its students, HZ has realized a place for around 1,200 students. A place where it is also possible to collaborate with the business community and other educational institutions. The sciences are housed in an environment with Rijkswaterstaat, the water board, University College Roosevelt (UCR) and business.

Creating an adequate and rich learning environment was an important basic condition for education. To this end, HZ has purchased the former Zeeland Province office at the Bolwerk Het Groene Woud in Middelburg. The building now houses the technical streams of higher education: Architecture, Civil Engineering, HBO-ICT, Industrial Engineering, Water Management, Chemistry, Engineering and the River Delta Development master’s program. With a new location that provides space for small-scale, project-based education, HZ has completed Phase 1 of the planned development. A location that also fulfilled the ambitions in the field of sustainability at the same time. Phase 2, the realization of the Joint Research Center Zeeland, is the next step. From the initiation phase, HEVO supported HZ in the plans to transform the existing office building into contemporary educational accommodation, from the purchase of the property, the preparation of the Program requirements up to and including all project and process management and the overhaul of the organization of the establishment, the new way of working is central. CONIX RDBM Architects was selected to further shape the design.

The 1973 building consisted of several separate building parts that were constructed in different periods. The challenge was to redesign the building into a single unit, also in terms of ecology, sustainability and energy efficiency. The building was renovated and expanded to a limited extent and already consisted of three construction parts: part 1 dates from 1973, part 2 from 1980 and part 3 was completed in 2005. Part 1 and part 2 are executed in the same design language, while Part 3 is designed in contrast and finished with titanium. This part of the building also has a much higher transparency, both on the facade and inside. The building has been provided with new facade openings in strategic places. Part of that are the titanium floor-to-ceiling windows, which reference the latest expansion. In other places, a few windows have been added if necessary, which fit into the existing facade openings.

The new building of the HZ University of Applied Sciences at Bolwerk Het Groene Woud in Middelburg has been chosen as the most beautiful building in Zeeland.

The structure of the building consists of a grid of 1.80 meters on which are placed columns. This gives the building a strong visual and physical connection to the municipal park Het Groene Woud, so that students can also use it in a natural way. This is reinforced by the fact that this outdoor space is accessible from the restaurant via the spacious roof terrace. The campus is located along a busy thoroughfare, a few hundred meters from the train station. The building is wedged between the historic center and the Bolwerk, which, together with a pond, forms an oasis of greenery. Part 3 of the building has remained unchanged as much as possible due to recent construction. The oldest parts of the building are completely insulated from the outside. The finish of the facade consists mainly of plaster. On the city center side, the facade is articulated by wooden facade elements, which have also been applied to the newly built auditorium. In some places, the facade is literally vegetated: a mixture of plant species gives a varied image.

In the new situation, the building fully meets the requirements of new construction thanks to new windows and frames, an insulating shell around the building and a cradle-to-cradle certified SemperGreenwall. The green facade with an area of ​​183 m2 provides a cooling effect, cleaner air and contributes to the city’s biodiversity. The SemperGreenwall Outdoor used is equipped with a unique plant care system. This web-based driver ensures the right amount of moisture and nutrition for plants is applied. The green facade can be followed from a distance. In addition, the green facade is also protected against frost using a compressor.

The new building facilitates meetings between students, teachers, teaching and research. Each curriculum has its own “base”, but there is also plenty of room for collaboration beyond the curriculum. There is generous admission for students, staff and visitors. In the entrance hall there is space for the exhibition and promotion of the identity of the courses. At the center of the ground floor are open learning and working spaces for students, staff and external parties where people work, consult and meet. These are connected to a coffee corner and adjoining consultation rooms for quiet conversations. Near these areas is a large meeting room and several small consultation rooms for personal conversations. An auditorium is located close to the central functions. The restaurant is divided into different parts and atmospheres and is located on the first floor. This space has been assigned other functions, such as meeting, working and celebrating together. Students and employees can choose from a diversity of workplaces, so business-related work is possible. Informal meetings take place around the coffee corners which are central on each floor.

In line with the exterior, the interior of the last extension will also be kept as much as possible. The corridors are made of a characteristic natural stone, which is also used further in the building. These will be preserved and developed locally. The look of the interior has been kept calm and natural and therefore matches the color of the exterior: the base is formed by white painted walls. Large wooden windows have been used between the hallways and the learning areas, which add a warm atmosphere to the space due to their color. At the same time, these contribute to transparency within the building and the organization. This also served as the basis for the layout: the teaching and research rooms are grouped in the center around a void, which promotes contact with each other as well as with the students. In addition to the open learning center, there are many project group rooms where students work in teams on their assignments. Because of the open framework, the supervision by the professors is carried out in a natural way.

Specific cooperation with partners in the region leads to the development of the Bèta Campus. With this, Zeeland invests in economic growth and innovation capacity, for example by stimulating education and research at MBO, HBO and WO levels, especially in the field of technology. Zeeland is recognized and recognized as a “living laboratory” in the Netherlands and abroad for the topics of water, sustainable energy and the bio-based economy. The Beta Campus is being developed in phases in close collaboration with UCR, HZ University of Applied Sciences, Scalda, WMR, NIOZ and institutes outside Zeeland. At the beginning of 2018, the signatures were put on the letter of intent of the Joint Research Center Zeeland, the joint laboratory in Middelburg with facilities for MBO, HBO and WO. Construction work is in full swing at Bolwerk Het Groene Woud.

This article was published in Schooldomein’s Inspiration Book 2010-2025 ‘Working together on tomorrow’s learning environment’. Download the article†

Reference Transformation of an office into inspiring educational accommodation