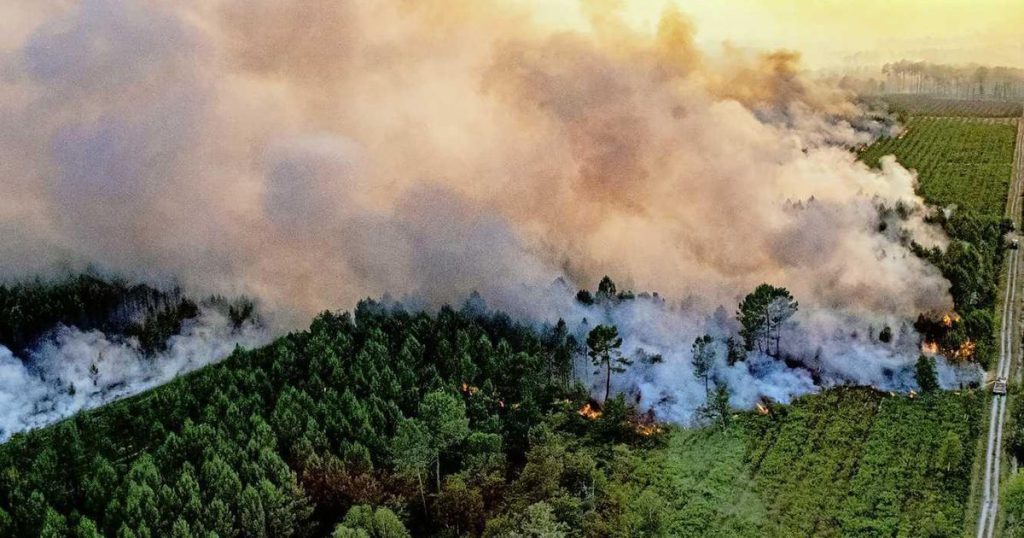 Firefighters are deployed en masse to contain the fires caused by the high temperatures. Thousands of hectares of forest have been destroyed in these countries since last week, many have been driven from their homes by fire and several aid workers have died in the flames.

In many departments of France, the weather services have declared code red because of the heat. Météo France is predicting temperatures of up to 40 degrees Celsius in parts of southern France on Sunday. New heat records are expected for Monday. “The heat is increasing. The heatwave is spreading across the country,” the weather agency said.

In the Gironde department, around Bordeaux, firefighters are trying to control two forest fires that have devoured nearly 11,000 hectares (15,400 feet of drop) since Tuesday. The forest fires led to the evacuation of more than 14,000 people, including tourists. Seven emergency shelters have been set up to accommodate the evacuees.

The Spanish authorities report about twenty forest fires in several regions of the country, from the south to Galicia in the extreme northwest. A fire in the mountains of Mijas, near the southern coastal city of Malaga, has so far destroyed around 2,000 hectares of land. The blaze forced just over 3,000 people to flee their homes, but around 2,000 have since returned.

In Spain, the mercury rises to over 40 degrees. A 60-year-old street sweeper has been killed on the job in Madrid, the Spanish capital, following heat stroke.

The battle against the flames also claimed the lives of a number of aid workers, including a pilot who died when his plane crashed in northern Portugal. In Greece, two aid workers were killed when their helicopter fell into the sea.

In Portugal, it is being examined whether the state of emergency, which applies for a week, will be extended due to the heat. In the country, the mercury rose to 47 degrees last week, but the temperature is expected to slowly drop slightly next week.

Forest fires are also reported in Italy, notably in Sicily, near Florence in Tuscany, near the seaside resort of Bibione and in the Abruzzo region. In Greece, 119 forest fires were reported in 24 hours on Sunday, especially near the tourist town of Rethymno in Crete.